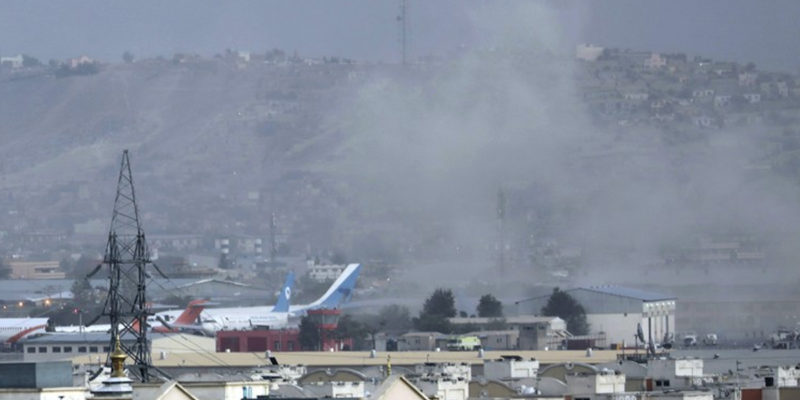 In 2001 the Central Intelligence Agency and U.S. Army Special Forces, working with the Northern Alliance, overthrew the Taliban regime in Afghanistan.

For the past 20 years, the U.S. military has been battling Taliban jihadis in combat throughout that country.

Unbelievably, in its hasty, mismanaged and ill-fated withdrawal from Afghanistan, the U.S. military was actually relying on the Taliban to help provide security for the Kabul airport.

That’s right, we were depending on our enemies to help keep harm from befalling our troops, who were forbidden from patrolling outside the confines of the airport and were left in static, vulnerable positions in the face of a known threat of Islamikaze attack by Islamic State jihadis.

In written and verbal communications, Gen. Frank McKenzie, commander of U.S. Central Command, and Rear Adm. Peter Vasely, head of U.S. forces on the ground in Afghanistan, have referred to the Taliban as “our Afghan partners,” according to two defense officials.

Evidently the basis for this reliance was the fact that the Taliban and the Islamic State are bitter arch rivals. Because the Taliban hate the Islamic State, someone decided that we could trust them to keep the Islamic State from following through on their threat to carry out Islamikaze attacks on our troops and the throngs of civilians of multiple nationalities trying to get into the airport to catch planes leaving Afghanistan.

As outrageously stupid and ignorant as this concept is, it is hardly surprising. That such an irresponsible and idiotic policy was instituted can be traced back to the failure of our military, from top to bottom, to understand our jihadist enemies. Never since the terrorist attacks of September 11, 2001, has our military leadership shown any indication that they understand the enemy, or are even making a serious effort to understand our enemies.

In the 20 years since 9/11, not a single military school has taught a curriculum that has allowed company or field grade officers to understand what animates our jihadist enemies.

In slight defense of our military, they have taken their cue from our political leaders, who also have never articulated any true understanding of our enemies.

The goal of every jihadist organization in the world, as clearly laid out in mainstream Islamic doctrine, is to create a world which is ruled by sharia. EVERY jihadist organization has that as their stated goal and they repeat it over and over. The Taliban, the Islamic State, Al Qaeda, Hamas, Al Shabaab, Boko Haram, Lashkar e Taiba, Jemaah Islamiyeh, Abu Sayyef, Hezbollah and scores of other organizations ALL have as their stated goal to impose sharia rule.

This is their number one goal.

In other words, the Taliban and the Islamic State have the same basic, fundamental goal. They may be rivals seeking that goal, but, nonetheless, it is their common goal.

In addition to the imposition of sharia being their goal, it is also the code by which they live. The term sharia and the term Islamic law are interchangeable. Sharia is described by Islamic scholars as literally “the path on which we walk.” It is the theo-legal-political-social set of laws that are supposed to govern all aspects of Islamic life.

Knowing this reality, no U.S. commander would ever place the safety and security of his troops in the hands of the Taliban.

The problem is, our military is not taught this reality because it isn’t politically correct. Their ignorance of our enemies’ threat doctrine cost precious American lives today.

No U.S. military school teaches our military about sharia. Our ignorant military leaders never learn what our enemies’ goals are and why they truly do what they do.

A corollary in this doctrinal principle can be found in the old saying “the enemy of my enemy is my friend.” The Islamic State and Taliban don’t just share the same doctrine, they share a common enemy: America.

It seems the Pentagon, the White House and Foggy Bottom all are clueless about this fact.