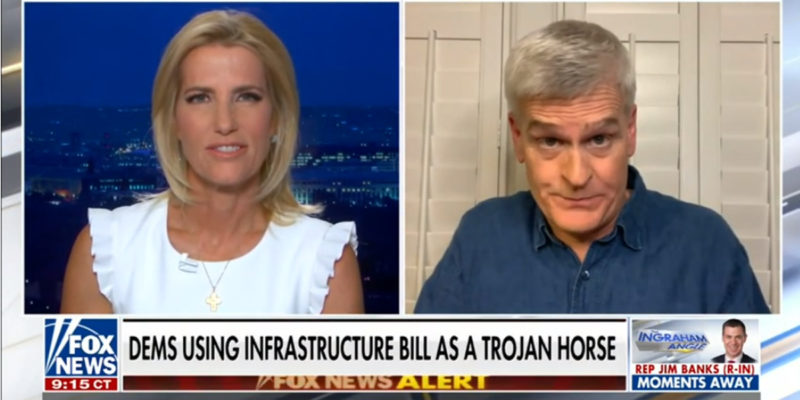 We wouldn’t call this a particularly good TV appearance, but these days Cassidy doesn’t make any of those.

What we’d say is it was a disaster.

Cassidy rode into Ingraham’s show after she had just done an introductory segment which perfectly set up what a joke this infrastructure bill’s negotiations have been, and proceeded to act like she didn’t know what she was talking about. Here was that segment…

Then here was Cassidy rattling off all the things that are in the bill and how awesome they are. Which isn’t the issue – the issue is the colossal budget reconciliation package the Democrats want to pass with all kinds of society-changing nightmares embedded in it.

You do realize that gender identity will confer protected-class status in federal law if the Democrats get their way here, right? Cassidy is here to tell you that this doesn’t matter, because MuhRoadsAndBridges.

You have to watch this to believe it.

He’s yelling at her and essentially telling her she’s stupid, and he’s claiming that opposing this infrastructure package he and Mitt Romney and the rest of the consensus-seekers/surrender monkeys on the GOP side of the Senate have allowed the Democrats to dictate to them is supporting Pelosi’s attempts to force the reconciliation package down their throats.

Cassidy seems to think Pelosi can’t get enough Democrats to vote for the reconciliation package to pass it in the House. Where he gets that idea is beyond us – the Democrats have voted in lockstep behind Pelosi ever since she first became House Speaker in 2007. They followed her off a cliff in 2010 when the GOP blew their majority away, and they’re still following her when it’s pretty clear a 2010-style wave is coming to sweep them out of the majority again.

She will pass that reconciliation bill, with or without this “bipartisan” package Cassidy is touting. What she wants is “bipartisan” cover for doing so – the Democrats think that they can minimize the political blowback of all the social engineering they’re planning with what’s in the reconciliation bill if they can then, as Cassidy is doing, mumble something about MuhRoadsAndBridges.

And he thinks that somehow, passing this “bipartisan” bill will produce the opposite effect because Pelosi’s House members will then opt only to pass it and vote down the reconciliation bill.

Which is a position not supported by facts, history or politics.

Cassidy’s second term as a U.S. Senator is shaping up to be the largest disaster in the history of Louisianans in that body. He’s making it very likely he won’t have a third term. We’d say he ought to resign, but with John Bel Edwards as the governor able to appoint his replacement even that won’t help. We’re stuck with him until at least January of 2024.