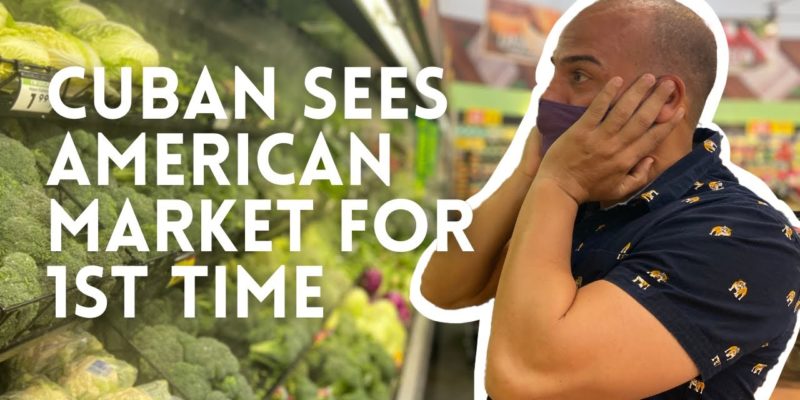 There is a relatively new YouTube channel out there called Yoel and Mari, and it documents the experience of Cubans coming to the United States and assimilating into the American experience.

The channel came out of an Instagram channel that started in 2015 and grew quickly, becoming one of the few Cuban Instagram channels out there. It hit YouTube in 2019, and when it did it gained a lot of momentum very quickly because its videos show from a very human side the difference between living in a communist country and one that is free.

And this video, shot in April, shows what happens when Yoel, who had never been to America, walks into an Aldi supermarket in Miami – and then a Safeway.

There are a couple of really interesting things about this.

First is how Yoel’s mind is completely blown at the diversity of choices available. At one point he’s looking at 10 different kinds of milk, and he says his entire life he’s only ever seen one. He can’t even hardly process the variety of what’s on those grocery shelves, and you quickly understand why after seeing the video of what Cuban groceries look like at the beginning of this episode.

But second, and probably most importantly, is that Yoel is very pissed off by what he sees in an American supermarket.

As he should be, because gigantic, brightly-lit, fully-stocked supermarkets with shelves packed with every kind of food imaginable is seen as wholly unremarkable by Americans and others in the West. Even in poorer countries like Mexico and Panama it’s not unusual for grocery shelves to be full of a variety of high quality items.

But in Cuba, there’s nothing. That’s what Yoel knows. Now he understands there is a whole world out there which lives better than he does, and he has perspective on just how oppressed he and his people have been by the awful communist regime in Cuba.

As he says, he’s furious. It’s all he can do not to go on a colossal rant about the Castroite regime.

This is why the Cuban people are agitating for something new. And this is why we as Americans have a moral obligation to help them. It’s disgusting to think that 90 miles of ocean could create such a colossal, mind-blowing divide. There is no difference between Yoel and his fellow Cubans who live in Miami. None. Someone imposed the difference in experience that makes him teary-eyed simply going to a grocery store, and those someones don’t need to have that kind of power over their fellow man.

We should be doing everything we can to help the Cubans retake their liberty. But we aren’t. Instead, the Biden administration is busy playing Failure Theater to the Cuban community in the United States while sitting on its hands as the Cuban regime cracks down on people protesting for their freedom. The hacks at the DNC put this statement out earlier…

After President Joe Biden hosted a meeting with Cuban American leaders at the White House to discuss the Administration’s response to the Cuban regime’s repression of pro-democracy activists, Felice Gorordo, CEO of eMerge Americas, co-founder of Roots of Hope, and one of the participants in the meeting with President Biden, penned an op-ed in the Miami Herald highlighting President Biden’s unwavering commitment to the Cuban people. As Gorordo wrote, “From his time as a U.S. senator until now, Biden has a long track record of advancing the cause of freedom and democracy around the world — and especially in Cuba.”

In case you missed it…

As the son of Cuban exiles whose parents fled their country in search of freedom and opportunity, I can attest to the fact that President Joe Biden has long stood — and continues to stand — in solidarity with the Cuban people’s struggle for freedom.

I’ve known Biden for a decade and seen firsthand his leadership on Cuba; for example, as vice president, he met with Cuban independent journalists and human-rights leaders such as Yoani Sanchez. From his time as a U.S. senator until now, Biden has a long track record of advancing the cause of freedom and democracy around the world — and especially in Cuba.

This past week, I was honored to participate in a meeting with the president, alongside a diverse group of Cuban-American community leaders — including Yotuel, the author and lead singer of the Cuban freedom anthem “Patria y Vida.” Each of us brought a range of experiences, backgrounds and viewpoints, but all had deep ties to our brothers and sisters on the island.

While we might differ on tactics, we are all in pursuit of our common goal and aspiration for a free Cuba, and the president is firmly with us. It speaks to the uniqueness of this moment — and to his presidency.

In the meeting, Biden demonstrated his profound empathy with the Cubans’ pain and desire for freedom. He also empathized those of us in this country, saying: “Cuban Americans are hurting. They’re hurting because their loved ones are suffering. And it’s, quite frankly, intolerable. So, I want the Cuban Americans to know that we — myself included — see your pain, we hear your voices, and we hear the cries of freedom coming from the island.”

The president repeatedly made clear that his administration is answering their calls.

For instance, new, targeted sanctions and international pressure on the regime have been coupled with seeking to provide internet access, as well as badly needed humanitarian aid and remittances — which will ultimately help Cubans become more self-reliant and independent from the regime, especially if we can ensure that the Cuban military won’t take a cut.

President Biden and National Security Advisor Jake Sullivan reiterated that Cuba is a top national security priority and that they are taking a whole-of-government approach to #SOSCuba.

To say he is evaluating every option is a profound statement and one that clearly demonstrates his leadership and deep commitment to taking a whole-of-government approach to supporting the Cuban people at this pivotal moment.

L. Felice Gorordo is CEO of eMerge Americas and co-founder of Roots of Hope, a non-profit focused on empowering youth in Cuba.

Read the op-ed in Spanish in the El Nuevo Herald here.

If you want to call BS on this, you’re welcome to. Remember – Biden’s administration is leaving the border wide open but if Cubans cross those 90 miles of shark-infested waters to get away from that island gulag, they’re turning them away. That’s how committed he is to the Cuban people.

And when Castrophiles like AOC and Bernie Sanders still make excuses for that regime with no negative consequences or even slight criticisms from others in the Democrat Party, it’s pretty easy to see the score. Hell, Sanders once actually complained that there were 23 brands of deodorant people could choose from while he was running for president.

There are millions of Yoels in Cuba who have never had the experience of being inside an Aldi or a Safeway. That’s a damned shame. So is the regime in Washington for failing to take advantage of a real opportunity to promote freedom for Cuba.

Interested in more national news? We've got you covered! See More National News
Previous Article Defunding The CDC Needs To Be On The GOP Agenda For 2023
Next Article You Might Be Interested To See The Letter Mike Johnson Wrote To Merrick Garland…