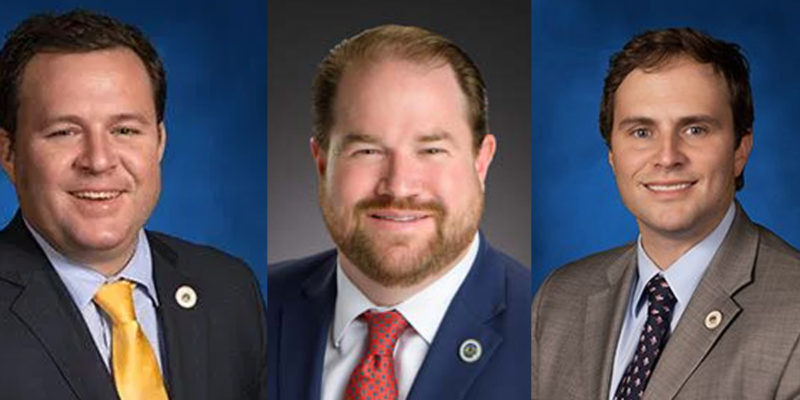 Perhaps you haven’t noticed, though it’s hard not to, but there is a statewide position in Louisiana which seems to be tailor-made for RINO Republicans. That would be the position of Lieutenant Governor.

We’ve had four Republican Lt. Governors since Reconstruction – we had three of them during Reconstruction, and all three were black, which is an interesting bit of trivia – and none of them fit the mold of a legitimate conservative GOP politician.

Paul Hardy, who served from 1988 to 1992, switched from Democrat to Republican to run for Lt. Governor in 1987. Then Scott Angelle was appointed by then-Gov. Bobby Jindal to serve out Mitch Landrieu’s unexpired term following Landrieu’s victory in the New Orleans mayor’s race in 2010; Angelle was a Democrat who then changed parties to the GOP.

Then Jay Dardenne won a special election in 2010 and served until he ran unsuccessfully for governor in 2015. Dardenne proved his mettle by jumping ship on the GOP and joining John Bel Edwards as his Commissioner of Administration. Dardenne has overseen an untold expansion of government in Louisiana as part of a left-wing regime it will take decades to recover from.

And the current Lt. Governor Billy Nungesser is doing everything he possibly can to brand himself as a RINO. Nungesser embraced Edwards at a 2018 rally for tax increases which the state did not need and which the state’s economy has never recovered from, he’s opposed a return to party primaries that most of the state’s conservative activists argue for as a way to police and protect the Republican brand, and he opposed a bill which had near-unanimous support among Republican legislators (only RINO Rep. Joe Stagni opposed it) to protect female athletes in Louisiana from an incursion by confused male participants.

Nungesser has quite obviously decided his time in the office is coming to a close. He’s running for governor in 2023. Which means we have a new crop of potential candidates to fight it out for the Lt. Governor position.

What are the chances we’ll get past the tradition of RINO’s in that office? Well, here’s what Jeremy Alford wrote about this…

House Ways and Means Chairman Stuart Bishop has become the first announced candidate for the 2023 race for lieutenant governor. “I’m running,” Bishop said in an interview last week. “I’ve put a team together and we have several events lined up in the coming weeks.”

The No. 2 job is expected to be an open seat during the upcoming statewide election cycle, since Lt. Gov. Billy Nungesser is mounting his own campaign for governor.

Bishop, a Lafayette Republican, has an enviable position from which to raise money in the coming months. Already he has more than $200,000 in the bank between his campaign finance account and his leadership PAC.

You may feel it’s a touch early to discuss the 2023 election, but we are roughly four months away from the midpoint of the current term of state government, which is a traditional starting point for statewide offices. Moreover, voters could benefit from taking a closer look at the position of lieutenant governor.

The field is developing quickly and Bishop will not be alone. State Rep. Scott McKnight, a Baton Rouge Republican, said he may be on the ballot as well. “I’m seriously considering it and looking at it very hard,” McKnight says.

Jefferson Parish Councilman Rickey Templet is also said to be discussing the idea with friends and family. Templet serves in a parishwide at-large seat and as a former state representative he knows the fundraising layout of Baton Rouge.

Donors and supporters are likewise urging Speaker pro tem Tanner Magee to keep an open mind about the race, but there’s nothing definitive yet emerging from the camp of the Houma lawmaker. Like Templet, Magee is a Republican.

So far, the only thing missing from this developing race is a Democrat. There is a small corner of the party apparatus that would like to see Baton Rouge Mayor Sharon Weston Broome throw her hat into the ring, but at the moment that seems to be little more than cocktail chatter.

Bishop is generally known as one of the power-behind-the-throne figures backing House Speaker Clay Schexnayder. So is Magee, who is generally hated by the conservatives in the House and is known as “Set ‘Em Free Magee” for his authorship of a chunk of the criminal justice reform legislation passed in Edwards’ first term – a review of crime rates in the state since the passage of that package doesn’t exactly make the case it was a good idea.

McKnight isn’t a member of the Conservative Caucus; he did vote for Sherman Mack as the Speaker back in January of 2020 and he’s generally been a good vote in the House during his two years as a legislator.

As for Templet, there’s a good rule where it comes to Jefferson Parish politicians: unless they’ve distinguished themselves as conservatives, like for example in the case of Steve Scalise or Eric Skrmetta, you’re entitled to believe the default position that they aren’t particularly conservative.

This is a “meh” bio for conservatives…

Councilman Ricky Templet brings a legacy of exceptional experience in serving the public, his community and his Parish. He was elected to the Jefferson Parish Council for District 1 in October 2011, and has proudly served in that capacity since January 2012.

Prior to beginning his term as Jefferson Parish Councilman, Ricky served as State Representative of District 85 from 2008 through 2011. As State Representative, he served on the Ways & Means, Criminal Justice, and Judiciary Committees, as well as the Joint Committee on Capital Outlay. Among the many pieces of legislation Ricky authored and helped pass are several pieces of legislation to stiffen the penalties for child predators and sex offenders. Other key legislation included creating the crime of the unlawful production, manufacturing, distribution, or possession of prohibited plants, and the addition of certain synthetic and hallucinogenic substances, including bath salts and synthetic marijuana, to the list of Controlled Dangerous Substances.

If this is the field, McKnight is probably the guy we would back.

Most interesting would be the potential knife-fight between Bishop and Magee, of course. They’re both among Schexnayder’s chief lieutenants, and you’d think they would be allies. If Alford’s latest reflects the true state of the race then it seems there’s a bit of trouble in RINO paradise.

Just keep this in mind – the first one of them who uses the word “independent” to describe himself and his candidacy is the first one you absolutely cross off the list. It’s worth remembering that Bishop and Magee both bandied that word about as a priority for Louisiana’s legislature following the giant GOP wins in legislative seats in the 2019 election.

Everybody thought “independent” meant independence from the Democrat governor. But that isn’t what Bishop and Magee meant. They meant “independent” from the business trade groups and conservative PAC’s who backed the Republicans for election.

Neither one of those guys has a record the conservative voters of the state should support. They’re both Capitol insiders who show contempt for the people of the state in all kinds of ways. Elevating either one to statewide office would be disastrous.

But on the other hand, doing so would be upholding our new tradition of having a RINO as our Lt. Governor.

Interested in more national news? We've got you covered! See More National News
Previous Article SADOW: The Voters Will Have Their Say About The Cowards On BESE
Next Article SADOW: Conservatives Rightly Flex Muscles On State Bond Commission