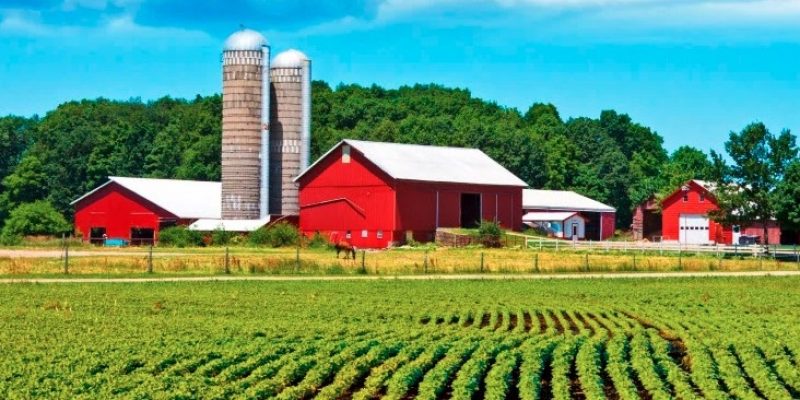 The combined tax rate could add up to a fatal 61% on inherited wealth, eliminating family farms (and many other small businesses) and consolidating all American agriculture into a handful of very large corporate farming enterprises that are easier for government to control.   (As we know, Socialism forbids the age-old right of private property, which is what confiscatory taxation seeks to attain.  No better reference may be made than to Karl Marx himself who said in The Communist Manifesto that, “the theory of the communists may be summed up in the single sentence: abolition of private property.” (Heritage Foundation)).

American farmers, and farming, have been an integral and foundational part of our nation’s history and development since its founding.  The American farmer not only predominantly feeds our country but many parts of the world as well.  Why we would ever threaten medium and smaller-sized American farmers completely escapes me.  Why we would ever trust foreign food sources for our food—as idiotic as trusting foreign oil provided by foreign nations who despise us to supply our nation’s energy needs—is very difficult to understand.

In our beloved Louisiana, our agricultural industry is hugely important.  Louisiana farmers create and manage one of the economic pillars of our state economy.   In fact, Louisiana farmers are fabulous producers of corn, cotton, sugarcane, soybeans, beef, poultry, fish, sweet potatoes and rice among several others.  (LA. Dept. of Wildlife and Fisheries).  Further, about 60% of Louisiana’s agricultural income is generated by crops while the other 40% is produced by livestock and livestock products.   In terms of income generated, the state’s top five agricultural products are sugarcane, rice, cattle and calves, soybeans, and cotton.  About 9% of Louisiana’s agricultural revenues are generated by cattle and calves.  Dairy products, aquaculture (farm raised catfish and crawfish), chicken eggs and hogs are also important sources of revenue.  Sweet potatoes and tomatoes are the most important vegetable crops, and peaches, strawberries and melons lead the fruit crops. (LA. economy/Netstate.com).

However, the critically important, generational impact of family farms across the nation and in Louisiana is threatened in President Biden’s $1.8 trillion so-called infrastructure bill.  How so? Well, in order to pay for his multi trillion-dollar expansion of social programs and Green New Deal projects, (or more accurately to create the illusion that it is being paid for), President Biden has included massive tax increases and one of them will impose a real hardship and likely the elimination of many of America’s approximately 2 million family farms.

In simplest terms, the bill proposes taking away what is referred to for tax purposes as the “stepped up in basis” on inherited farms and businesses.  Some experts have concluded that a typical Iowa farm, for example, will be hit with $680,000 in new taxes—or a 40% tax, the payment of which may cost, and kill, the farm itself.  (Americans for Tax Reform).

Simply stated, this tax plan calls for nearly doubling the top tax rate on capital gains and eliminating a significant tax benefit on appreciated assets.  For example, if someone dies after starting a business decades ago that’s now worth $100 million, under the current tax law, the business would pass to family members with no capital gains tax because the cost basis of the business is “stepped up” to its current value at death.  However, under this Biden plan, the heirs would immediately owe a capital gains tax of $42.96 million based on the capital gains tax rate of $39.6 %, plus the net investment income tax of 3.8%, minus the $1 million estate tax exemption.  This proposal would reduce the estate tax exemption from $11.7 million to only $1 million!   When the estate tax is added and all the numbers are crunched and sorted out, these family farmer-heirs would owe a whopping $61.1 million on the original $100 million inheritance.  (This, of course, does not include state capital gains and state estate taxes). (AP).  This is a staggering redistribution of wealth.

“I have serious concerns about proposed changes in tax provisions that could hurt our family farmers, ranchers and small businesses.  I am very concerned that proposals to pay for these investments could partially come on the backs of our food, fiber, and fuel producers.  In particular, “step-up in basis” is a critical tool enabling family farming operations to continue from generation to generation.  The potential for capital gains to be imposed on heirs at death of the landowner would impose a significant financial burden on these operations.

Additionally, my understanding of the exemptions is that they would just delay the tax liability for those continuing the farming operation until time of sale, which could result in further consolidation in farmland ownership.  This would make it more difficult for young, beginning, and socially disadvantaged farmers to get into farming.   While I appreciate that the proposal provides for some exemptions, the provisions could still result in significant tax burdens on many family farming operations.”

“I introduced Arley Wilson, who schooled policy makers on the impracticality and inefficiency of the tax law… and explained how its application on top of the estate tax would be the ‘death knell’ for family farms and small businesses.  Among other issues, it would require complex reconstruction of the decedent’s assets, give rise to extended audits, and trigger litigation for next of kin.  Eliminating step-up in basis is another post-death tax grab, adding punitive taxes on thrift, savings and investments.  Congress (which tried to eliminate “step up basis” before) realized its mistake and voted in 1978 to suspend carryover basis and repeal it in 1980—both with then-Sen. Biden’s support.  He’s forgotten the lesson he should have learned.” (Parenthetical added).  Four decades later Democrats want to dismantle a century-old tax law that has stitched the economic and social fabric of American agriculture together for generations.  The 1921 Revenue Act codified step-up in basis at death.  It has allowed property and livelihoods to be passed on to the next generation without a confiscatory tax.” (Grassley, WSJ).

As noted by tax lawyer, Robert W. Woods, “under current tax law, assets that pass directly to your heirs get a step-up in basis for income tax purposes.  It doesn’t matter if you pay estate tax when you die or not.  For generations, assets held at death get a stepped-up basis—to market value—when you die.  Small businesses count on this. Biden’s proposal would tax an asset’s unrealized appreciation at transfer.  You mean Junior gets taxed whether or not he sells the business? Essentially, yes. The idea that you could build up your small business and escape death tax and income tax to pass it to your kids is on the chopping block.  Biden would levy a tax on unrealized appreciation of assets passed on at death.  By taxing the unrealized gain at death, heirs would get hit at the transfer, regardless of whether they sell the asset.”(Forbes, Robert W. Woods).

It is appalling; it is insane that President Biden would eliminate the stepped-up basis.  This is in addition to his desire to raise the federal corporate tax rate to a higher-than-China rate of 28% and to impose the highest capital gains tax since Jimmy Carter in 1977.   Again, this plan would hit nearly 2 million family farms (and many, many other small businesses) while Americans are still reeling, struggling to recover from the pandemic.

Interested in more news from Louisiana? We've got you covered! See More Louisiana News
Previous Article SADOW: Stuck-On-Stupid Woke NOLA Causing Own Problems
Next Article This Is What Bill Tate Has Already Done To LSU