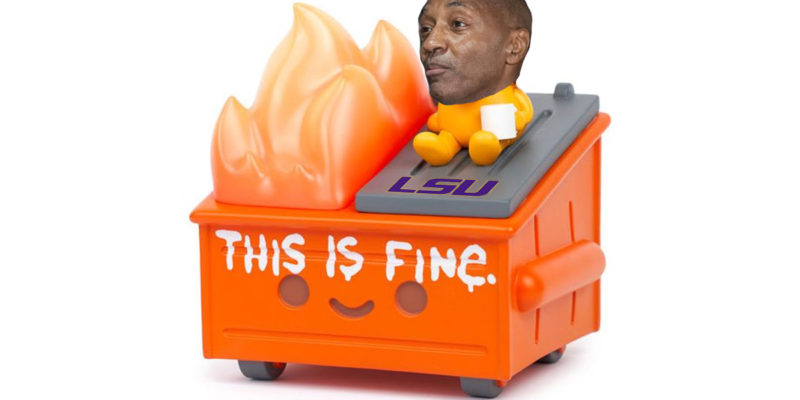 It’s fair to allow that William Tate hasn’t been on the job very long, and certain disasters of public relations and substantial performance pre-exist his assuming the role of LSU President.

Except it’s fairly clear that Tate is committed to the same woke stupidity which put LSU on a glide-path to irrelevance in the first place, and where it comes to the university’s insane stance with respect to vaccinations and COVID-19 he can’t pin his problems on his predecessors.

LSU is in the process of expelling students for their refusal to be vaccinated or show periodic negative COVID tests. Dozens of tuition-paying students have been run off already, with an academic death toll likely to run into the hundreds before it’s over if the expectation that LSU will soon require vaccine booster shots as part of its registration requirements plays out.

On Friday, an LSU spokesperson said 24 students were unenrolled from the school after they failed to comply by the extended deadline that same afternoon. Students who refused to abide by the original reporting deadline on Sept. 10 were given an extra week to complete their registration, despite several warnings from the university last week saying they would face unenrollment for noncompliance.

The university last said 78 students were sent notices Wednesday night alerting them they would lose their spot at the school. Those students were given until 4 p.m. Friday to complete their registration and get back into their classes.

Needless to say this isn’t standard procedure on college campuses. For example, the University of Alabama, which has clearly surpassed LSU in virtually every respect thanks to the recent history of poor leadership at the Baton Rouge campus, is requiring anybody on the Tuscaloosa campus who tests positive for COVID to report themselves to university officials, and if you’re unvaccinated they might require you submit to testing if a COVID spike turns up on campus.

At Ole Miss, the policy is pretty similar to Alabama’s.

And at LSU, Tate is getting letters from attorneys which aren’t complimentary. Here’s an example which popped late last week… 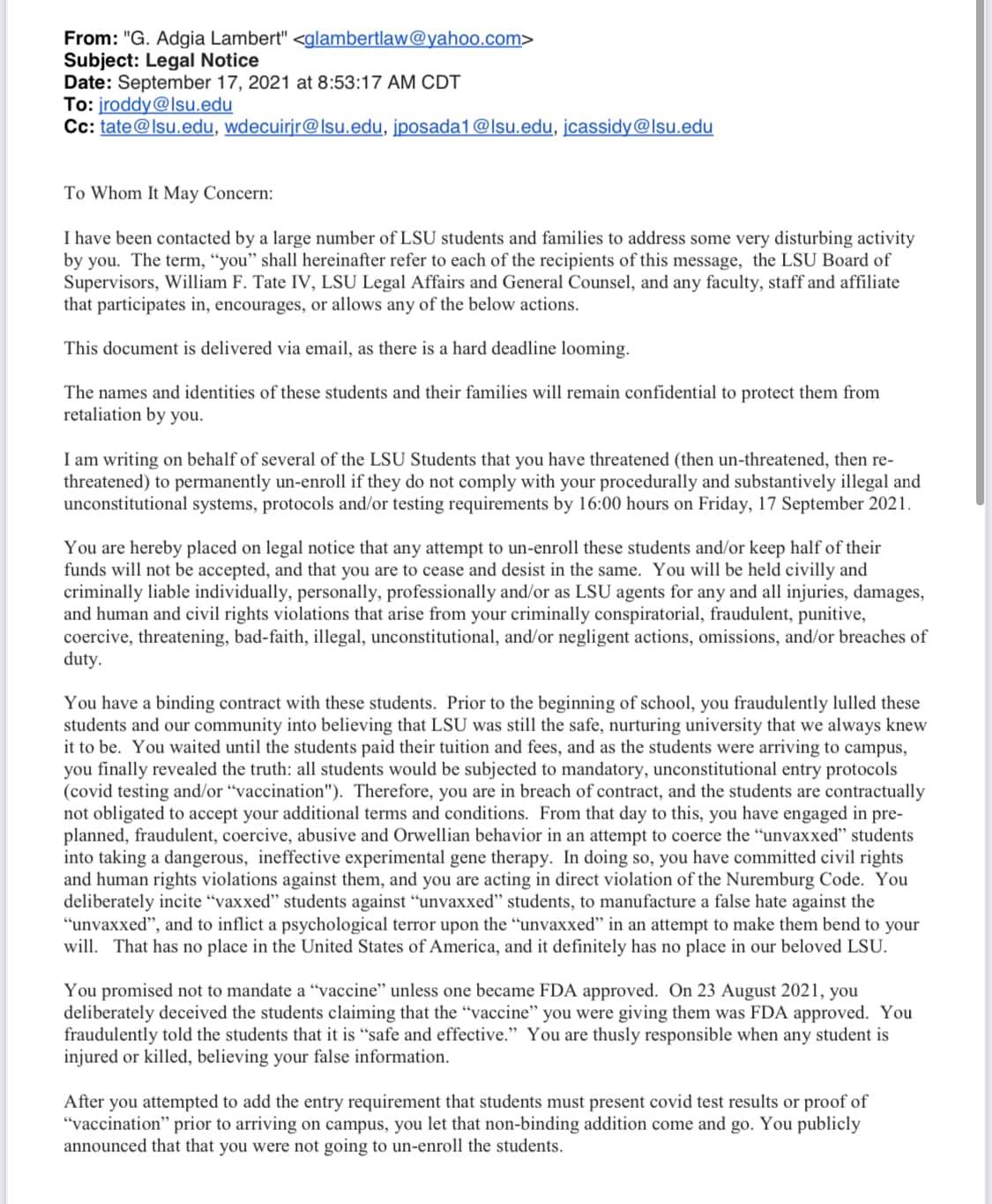 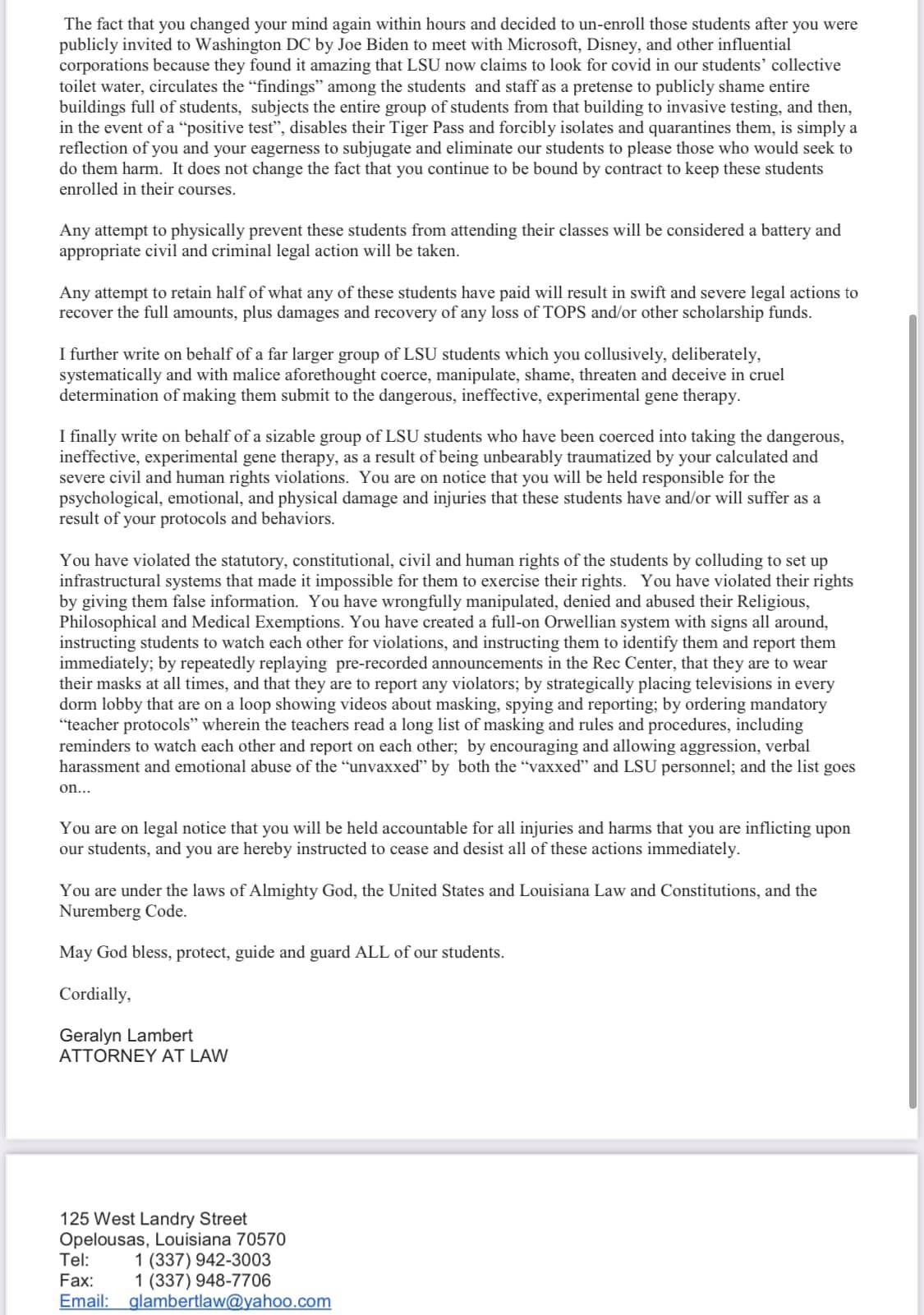 That letter is a bit loaded, but it does raise some key points. The idea that you’d kick somebody out of school for refusing to take a vaccine which doesn’t actually stop the spread of the disease it’s supposed to vaccinate people against without giving them a full refund is so ridiculous that you’ve got to wonder if they even have any attorneys at LSU anymore.

And while F. King Alexander and Tom Galligan were embarrassments as the school’s president and set the Ole War Skule on its current destructively woke path, Tate has turned that brushfire into a conflagration barely two months into his time here.

And he really doesn’t have any excuses for it. This was all his doing. It’s a signal that Tate is likely to be a mess as LSU’s president, with LSU ranking as the worst university in the SEC (it’s the second-worst in the league now, after all) by the time he’s gone.