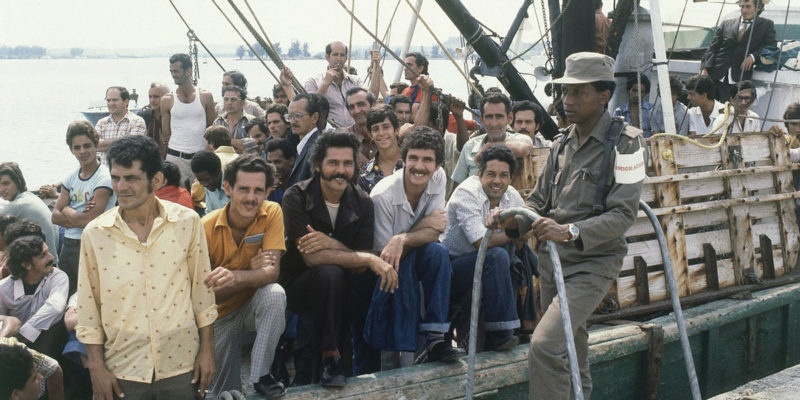 On April 20, 1980, Socialist Dictator Fidel Castro announced the Mariel Boatlift, in which Cubans who wanted to leave the communist island were free to do so, provided that somebody would send a boat to pick them up. About 125,000 Cubans fled on about 1,700 boats heading 90 miles north to Miami. This was President Jimmy Carter’s refugee problem and continued through the summer of 1980. Like the Haitian immigrants, they camped under a bridge until they were moved to the Orange Bowl and moved through our immigration system to citizenship. Carter went on to lose that election.

In 1979, the Governor of Arkansas resigned to take the Senate seat he had just won. To finish out the remaining 2 years of the term, a young Democrat named Bill Clinton was elected. In 1981, Bill Clinton lost his re-election. Just two years earlier, he won with 60% of the vote and now he was out on the skids. For years, he blamed Carter for his loss. It was something Bill Clinton never forgot.

During the 1992 Presidential Campaign, Bill Clinton was very critical of Bush’s Haitian immigrant policy demanding the Bush let the Haitians come. When Bill Clinton won, Haitians built rafts and set sail to the United States. Bill Clinton then announced he was going to continue Bush’s Haitian immigration policy. Pretty boring stuff, right? The lesson Bill Clinton learned was that one issue caused the Democrats to have massive defeats in 1980. Yes, there were other issues going on during the Carter Administration and he was known as the Do Nothing President. Four years later Reagan won re-election by winning 49 of 50 states. It’s hard for us to understand just how significant this was. For years Democrats had control of congress, three television channels all which favored the Democrat talking points, and information was not nearly as available as it is today (even with Big Tech’s iron fist crushing alternative views). Liberalism went unchecked, and conservatives didn’t have a voice. Despite that, the nation chose Reagan’s “morning in America” message over Carter’s mourning in America policies.

For decades the GOP was inept, while able to win on the national stage of a Presidential election, the congress stayed in control of Democrats for decades. It wasn’t until Rush Limbaugh hit the airwaves with his growing audience and Newt Gringrich’s ‘Contract with America’ that the Republicans finally took control of the House for the first time in forty years.

Here we are 40 years later and most of America does not remember the Carter administration. In fact, if you’re under 60, you probably don’t remember it, and if you do, barely so. So one can’t totally blame young liberals in their blissful ignorance in supporting policies that wrecked economies throughout history. As the saying goes, “Those who don’t know their history are doomed to repeat it”.

Biden is old enough to remember it; but one must wonder if he does. Unfortunately for America, it seems all the memory in the Biden family was in Hunter’s laptop he forgot to pick up. Let’s be honest, Biden pushes policy like he’s Mr. Magoo and does it while singing the third verse of 59th Street Bridge. I’m not saying Biden is senile, I’m saying he would wreck his Tonka trucks in an empty parking lot. The lyrics of any Sofi Tukker song makes more sense than Biden’s policies.  If Joe were captain of the Titanic, he  would have put it in reverse and hit the iceberg on the other side to make things fair and then tell his supporters “everything is fine, stay on the ship” while blaming it on Trump.

Democrats who don’t remember the Carter years now make up the majority of the Democrat party and are so tied to ideology that they are full of contradictions and hypocrisy. They say they are against Fascism, then act like fascist. They demand a living wage and flood our nation with cheap labor. They take a soft approach to enemy states, and take a hard line approach to the Americans they are supposed to lead. They decry Russian interference in our elections, then immediately claim this election was the most secure election. They claim they follow the science then mock drugs that have legitimate human uses. The hypocrisy and contradictions don’t end there.

You will forget your transgressions against other people within a few minutes, but they will remember it for the rest of their life. Biden’s policies are doing real harm to every day people. To the soldiers, they won’t forget surrendering Afghanistan. To the single parent, they won’t forget the rising prices. The people along the border won’t forget the real harm that the immigration policy is doing to their community.  He’s doing real harm to minorities who see their unemployment rate lag behind. The longer Covid remains an issue, the less forgiving we’ll all be of those in power.

Joe has spent all of his political capital in the first 9 months of his presidency and now is focusing on bankrupting the Democrat party of their political capital. We’re just beginning to feel the effects of Biden’s policies and it’s going to get far worse because the Democrats simply are not smart enough to recognize they have a problem on their hands. Rasmussen has Joe polling at 40% and they’ll still insist on pushing forward with their agenda.  How low must Joe go before the Democrats bail on him? The media appears to be finally catching on, probably realizing that they are losing all their remaining credibility on a man who simply can’t deliver. The longer they wait, the more unforgettable his policies will become and the more unforgiving the people will be of the Democrat party. The Democrats now run the risk of losing a generation.