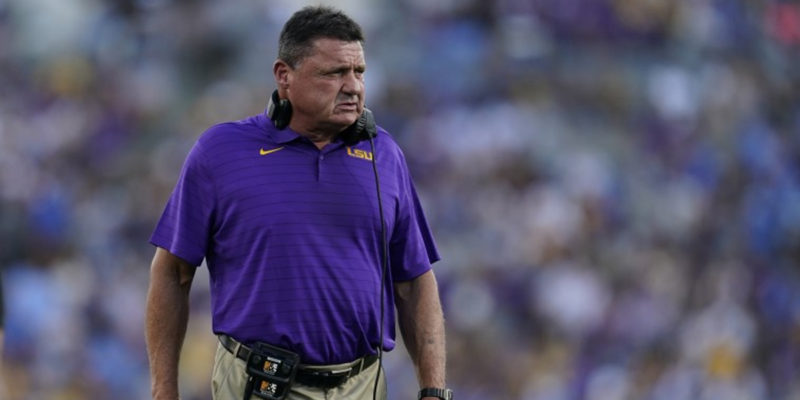 Josh Pate of 247 Sports does a video podcast every day, and yesterday he covered the subject of the fan reaction at LSU to Saturday’s 38-27 loss to UCLA. Pate’s take is well worth sharing, because he nailed perfectly what’s going on.

We’ve been here before. LSU took a trip to Green Bay in 2016 to play a Wisconsin team everybody knew was less talented, and came away a loser in a game which largely continued what fans hated about Les Miles, and this situation is identical.

Miles was gone about a month later. Whether Orgeron survives we’ll find out, but there’s little reason to believe Pate is wrong when he says a change is inevitable.

He’s right that what’s driving the fan rejection of Orgeron is that feeling of betrayal. Pate analogizes it to a failed reconciliation in a marriage. The cheating husband swears he’ll never do it again, and the wife agrees to forgive him, but then she catches him a second time.

And what was worst about the UCLA game was that all of the same deficiencies which led to last year’s disastrous season showed up again – the awful offensive line, the clueless secondary, the criminally-terrible linebacker play, the disorganization, the suspect effort and the clear failure to make adjustments or even have a viable game plan.

It was all there for everyone to see after Orgeron promised the fans it had been fixed in the offseason.

Pate wasn’t even aware of the comments by starting offensive linemen Ed Ingram and Liam Shanahan that UCLA did things they weren’t shown on film. Ingram even said he felt like they were tired and out of shape. That’s utterly unacceptable and the fans can’t be blamed for demanding a full housecleaning.

It’s exactly the same as 2016. If anything it’s more acute now. Miles had come off a nine-win season in 2015 with a bowl win; he’d just come under fire during a three-game losing streak in November. Orgeron had gone 5-5 and needed a couple of tight victories in the last two games in order to get to .500.

But Miles’ incompetent three-yards-and-a-cloud-of-dust offense was supposed to be modernized in advance of 2016 and it was obvious it hadn’t been. And Orgeron’s shitshow defense and sloppy execution across the board was similarly unaddressed.

What’s different about 2016 as opposed to now is that in 2016, Miles had some institutional support even though the program off the field was an unmitigated disaster. Athletic Director Joe Alleva had tried to fire him, but the school president F. King Alexander said no.

Now? Current AD Scott Woodward has far more stroke than Alleva ever had. New school president William Tate is an unknown, but he can’t afford to back Orgeron given his other challenges.

And there are lots of reasons why Woodward wants Orgeron gone.

The Title IX problems with LSU football may have started with Miles, but it’s well documented that Orgeron hasn’t cleaned them up very efficiently. That was made clear in the Husch Blackwell report which was made public this spring. Orgeron didn’t exactly cover up reports of sexual abuse of women by LSU football players, but he also wasn’t the most forthright in addressing them.

By all indications Woodward is making a file on Orgeron. It isn’t just the Title IX stuff.

Back in April, Woodward was a guest in a segment of Jim Engster’s radio show in Baton Rouge. A question from a caller, which came off as though it might well have been planted, gave him an opportunity to trash Orgeron for having said nice things about President Trump last summer. The coach had said he “loves” Trump and that he was doing a great job, which at the time didn’t seem controversial given that (1) the President had hosted the 2019 Tiger national champion team at the White House for what was widely thought of as a real highlight both of his presidency and the program, (2) Hurricane Laura had just come through the state and everybody was anxious about getting federal aid to southwest Louisiana, and (3) Trump was busy trying to convince the Big Ten to play a football season, without which college football would be badly damaged.

Of course, in 2020 you had the Black Lives Matter moment, and Woodward’s answer to that question included the opinion that the coach had torched the chemistry in the locker room. He decried Orgeron’s “politicization” of LSU football, something which was curious given the fact that nobody complained when Orgeron hosted a fundraiser for John Bel Edwards on campus two weeks before Woodward was hired as AD, and Edwards spent the 2019 season as practically part of the furniture of that program – so much so that he horned in on Joe Burrow’s Heisman award in New York following the season.

None of that was problematic but a nice statement about Trump was? The issue isn’t whether Woodward was wrong, it’s that he picked that fight in the first place. An athletic director supporting his football coach tamps down that question rather than fanning the flames.

And then there are the bimbo eruptions. Orgeron has had himself photographed – and the images make it out onto the internet – on more than one occasion in the presence of women much younger than himself, which isn’t exactly illegal given his status as a divorce’, but when one of them is taken in a bed it’s a bad look.

Running around without a shirt on is another thing thought to be a sore spot where the athletic department is concerned. A man making $8 million to coach football can at least have a shirt on.

Then there was this incident on Saturday before the UCLA game.

Here was what he said about it…

Nobody is buying that. As Jordy Culotta noted on his podcast Tuesday, the administration sees a pattern of behavior which indicates something different…

Culotta shared a story which had been quiet until this week, which was this – at a fishing camp in Port Fourchon, which probably doesn’t even exist anymore, this summer, an LSU booster and his friends and family looked out onto the water and saw Orgeron in a boat going by. One member of the party at the camp pointed out “That’s Coach O!” while someone else snarked that he’d better win every game.

A few minutes later there was a knock on the door, and it was Orgeron. He was angry at the perceived disrespect and belligerent toward the people in the camp.

And one of them, the story goes, recorded the whole thing and sent it in to the athletic department.

Tomorrow LSU plays McNeese State in a game it’s highly unlikely they’ll lose. But after that, things could get very strange. Central Michigan comes in to Tiger Stadium, in a game designed as a rent-a-win. But CMU is coached by Jim McElwain, the former Florida coach, and they gave Missouri all they wanted on Saturday. Then the SEC schedule begins with a trip to Starkville, a home tilt against Auburn and a road game at Kentucky.

It doesn’t get any better after that. This could become a dirge of a season, at a time the athletic director is already looking to change him out.

It’s not hard to see how this will go.

Orgeron’s contract calls for a $21 million buyout if he’s removed this year. It’s certain he won’t be paid that sum. Woodward is building that file more and more quickly all the time, and when the ax falls it’ll either be a negotiated buyout at a big discount or a firing for cause.

It’s tough to see it going down any other way.