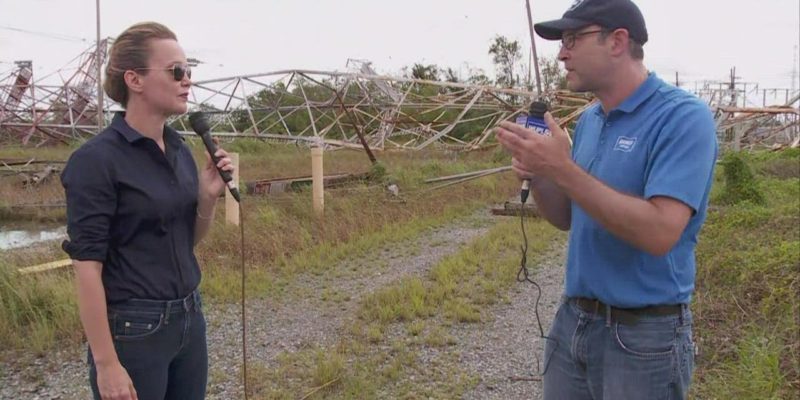 Overnight there was some good news for a sliver of the population of New Orleans, as electricity was restored for parts of New Orleans East.

But that’s an island of happiness in a sea of misery. The majority of the New Orleans area was in the dark Tuesday night, the third night with no lights on anywhere. Tonight will be the fourth night, and tomorrow night will be the fifth. It’s going to continue that way for a good while thanks to Hurricane Ida.

But while electric light isn’t available to the city of New Orleans, there is still a bit of illumination available related to the question of electric power. Namely, that if you didn’t realize before Ida wiped out the power grid in New Orleans that the city’s politicians were completely worthless when it comes to the delivery of basic services, rather than social-justice hot air and wealth redistribution, you can’t really avoid that conclusion now.

New Orleans was battered with hurricane-force winds for some 16 hours on Sunday, which is enough to disrupt even a very robust power grid. In normal times, the city has that. Entergy, the main utility serving not just New Orleans but most of southeastern Louisiana, is part of the massive Midwest Independent System Operator (MISO), which is something of a supergrid for power companies from Louisiana to Canada, and its transmission lines bring in power from all over

Louisiana’s geography makes it more or less impractical to run those major transmission lines below ground, and that isn’t standard practice of utilities anyway. What’s the usual case is there will be one or more power plants in or near to a city to cut down on the transmission distance.

New Orleans used to have local power generation. At Michoud in New Orleans East there was a decent-sized power plant which provided a big chunk of the city’s power. That was before all of the power grid across the country started to become integrated. Now, most of the more locally-generated power comes from up the Mississippi – the Little Gypsy plant in Montz, which is between Norco and LaPlace on the east bank of the river, the Waterford 3 nuclear plant in Hahnville on the west bank, and the Nine Mile plant which is just downriver from Bridge City on the west bank in Jefferson Parish, essentially just across the river from Ochsner Hospital’s main campus.

Entergy wanted to do something to alleviate the dependence on long transmission lines, so a few years ago they proposed to build a new power plant at Michoud which would somewhat replace the decommissioned power generation they used to have there. But Entergy’s operation in the city of New Orleans is not regulated by the Louisiana Public Service Commission, like every other utility in the state is. In New Orleans it’s the City Council who regulates it.

And when Entergy went to the City Council with the idea to build a plant which would generate about enough electricity to power somewhere between a quarter and a third of the city’s needs, they got rejected. Lots of negotiations ensued, and what ended up being built was the New Orleans Power Station, a little rump natural gas power plant generating something like 110 megawatts of power a day. That plant is responsible for the sliver of New Orleans East now getting electricity, but it’s plugged into the main transmission lines which service the city and it can’t put the lights back on in New Orleans by itself.

If you’re the mayor of New Orleans, particularly since the mayor of New Orleans used to be on the City Council, or if you’re a member of the City Council, you’re pretty much required to know all of the above information. Of course, the City Council presided over the utter clown show that was the debate over the new power plant at Michoud, during which the environmentalist and social justice nut groups all raised hell about the use of fossil fuels to keep the lights on in New Orleans, and things got so ridiculous with the paid leftist activists emoting in front of the city council that Entergy’s PR firm decided to play ball as well and hire their own paid actors to lobby the city council for the power plant.

The New Orleans Times-Picayune and some of the left-wing blogs in the city found out about that and threw an absolute fit over it, never once bothering to note that there is literally no difference between what the lefty groups do and what Entergy did. And once the local media picked up on Entergy’s ringers, every one of the local politicians contributed to the circus.

All over a little power plant which can’t even provide more than maybe a tenth of the power for the New Orleans area.

But these same preening dunces who stood in the way of attempts to give New Orleans a proper local power generation capacity are now howling at Entergy over the fact their system is down. WWL-TV did a piece yesterday about Entergy’s problems and here is Yass Queen mayor LaToya Cantrell screeching about the obvious fact that the lights are off…

Just got off call pressing Entergy engineers. We need some solution to power ASAP. We may have some flow of power into #NOLA within 48 hours. We need this done! More to come.

Essentially what she’s doing is the same thing as the idiots who come out of their front door to berate the linemen out on the street who are working to restore power after the storm for not having it on sooner.

If you really want to see ridiculous, here was Moreno on WWL with David Hammer Tuesday at the site of that downed transmission tower, dressed up like a lady cop complete with the aviator sunglasses, microphone in hand, playing electrical engineer.

Moreno seems a whole lot more interested in self-promotion than anything else, and when she starts screaming about Entergy’s lack of power resiliency what you should realize is that nothing she’s going to be doing will get the power back on more quickly.

Politics has hindered the power supply in New Orleans. That’s clear. And the fact that Entergy has to deal with the New Orleans City Council and the PSC at the same time simply creates a larger and more inefficient bureaucratic mess for them to handle.

Lambert Boissiere, one of the five PSC members, represents a district mostly covering the city of New Orleans, and when it comes to electric power Boissiere has basically nothing to do.

And of course he’s getting calls screaming about the lights being off in New Orleans. So is Eric Skrmetta, the Public Service Commissioner who represents the New Orleans suburbs which are just as bereft of electricity. Skrmetta was on WWL radio yesterday and, asked about the city of New Orleans, he made the point that the PSC would be more than happy to regulate Entergy in New Orleans just as it does the rest of the state and doing so would likely save the ratepayers 20 percent on their electric bills.

If it would get them out of the clutches of Helena Moreno and Jared Brossett and some of the other clowns on the New Orleans City Council, the guess is Entergy would welcome that as well.

But that’s for another time. The power will come back on in New Orleans as those lines get repaired and it’s safe to run juice through them. This is what the aftermath of a Category 4 storm looks like when it spends most of a day beating the hell out of your city. Preening dunce politicians emoting in front of microphones is the last thing anybody needs.

Interested in more news from Louisiana? We've got you covered! See More Louisiana News
Previous Article 666 Bills Go Into Effect Today In Texas (But It’s Not All Bad News — Far From It)
Next Article VIDEO: More Ida Damage In Grand Isle, Fourchon And Leeville