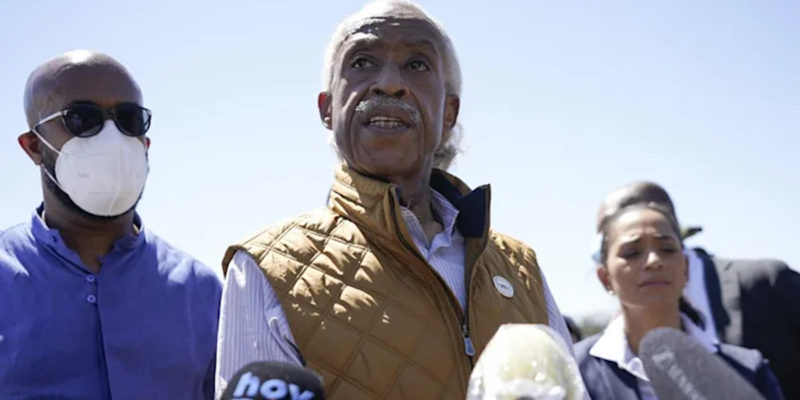 Boy, this is something to see. How many decades have we been waiting to see Al Sharpton treated like this when he tries to set a race-baiting brushfire?

Not to read too much into this, but consider the situation and what it might tell us.

First, that Sharpton would descend upon Del Rio, where thousands of Haitian illegals were under that overpass and where the media let out false reports the Border Patrol was whipping them from horseback as an attempt to deflect from the enormity of the border mess the Biden administration has made, was far beyond expected. It was practically required.

Yesterday the word came out that the Border Patrol won’t have mounted agents anymore, at least for a while. That’s how much of a pandering joke the Biden administration is. And then it got worse.

President Biden on Friday issued a stern warning to Border Patrol agents seen this week chasing migrants on horseback, vowing, “those people will pay,” amid an ongoing investigation into the images which some Democrats have claimed showed agents whipping migrants.

The president said Border Patrol agents were victimizing migrants: “Horses run them over, people being strapped.” However, critics have pointed out the agents were holding onto reins to control the horses, not whips or straps for migrants.

“Of course I take responsibility,” Biden said. “I’m president, but it was horrible what you saw.”

The thing to understand here is that almost all of those mounted Border Patrol agents are Hispanic. As is a huge percentage of the Border Patrol, period.

So you have the Biden administration taking the part of Haitian migrants, most of whom are here not from Haiti but from places like Brazil and Chile and elsewhere in South America – they were refugees from the earthquake several years ago and they’ve made their way to Del Rio by land, over the Hispanic Americans working to protect our border.

And when Sharpton shows up to further inflame the situation, he gets unloaded on by, it’s pretty clear in that video, Mexican-American hecklers.

Do you spot the interesting little chasm opening up here? It’s part of an overall trend, but this is a specific piece of that.

We already know that Hispanic voters moved to the right in the 2020 election. That’s becoming a sizable thing in Texas, so much so that in McAllen, not all that far from Del Rio, earlier this year a Republican was elected mayor. McAllen is 85 percent Latino. Biden responded by dumping as many illegals as he could there, including hundreds of COVID patients.

Now you have this situation in Del Rio, which is utter chaos.

The GOP for years did service to Corporate America and its search for cheap labor by cooperating with the Democrats on an open border and unlimited illegal immigration, not to mention barely-limited legal immigration. Republican voters were lied to and told that open borders were the only way to attract Hispanic voters, though anybody who actually talked to Hispanic Americans in neighborhoods full of illegals would have known that was completely wrong.

Along came Donald Trump, who all but shut down the border, and even after he inflamed lots of Hispanics by making statements the media reported as insults to Mexicans in 2016, he ended up pulling a high percentage of that vote after they saw his results.

Now the border is wide open, all the problems are worse than before and Biden is attacking Hispanic border guards on behalf of Haitian trespassers, some of whom are openly violent, by the way, and what do you think that’s going to do for the Democrats in future elections?

Watch this stuff. It’s going to continue to develop.

Interested in more news from Texas? We've got you covered! See More Texas News
Previous Article SADOW: How To Vote On Those Four Constitutional Amendments This Fall
Next Article BLANCO: How I Became a Republican (and what I’ve learned since) Part IV