Here’s something interesting and instructive. On Wednesday a letter went out to Gov. John Bel Edwards and Louisiana Department of Health Secretary Dr. Courtney Phillips from ten GOP state legislators informing them that legally they cannot mandate that anyone take a COVID vaccine.

The long and short of the statement is that the vaccines available in Louisiana are all offered under an Emergency Use Authorization (EUA) and not full FDA approval. There are some differences between the two, one of which is that, the legislators argue, it’s illegal to mandate the use of a drug which is under an EUA.

Here’s the letter, and below it we have some interesting side politics to talk about.

There is something of an issue here, namely that the letter went out on House of Representatives letterhead. As we understand it, House Speaker Clay Schexnayder has been cracking down on legislators for using the letterhead in written statements, something which is a bit of a change from the way things have usually been done. Our understanding was that if you were a House member, it meant you had the use of the House letterhead.

But last month Rep. Kathy Edmonston and a few others put out a press release using House letterhead talking about COVID-19 and discussing topics the state’s medical establishment doesn’t like to see discussed, and Rep. Ted James, who chairs the Legislative Black Caucus in the House, threw a fit about it. Schexnayder then told the House members not to use the House letterhead for press releases.

But the above letter isn’t a press release. It’s a letter to Edwards and Phillips by House members who, at least as far as we understand it, have the same right to use that letterhead that Schexnayder has. And now Schexnayder is saying nobody can use the letterhead but him.

It’s a petty, stupid little thing but it has really raised some hackles over the last day or so with a number of the legislators we’ve talked to. That it’s perceived by many of them that Schexnayder continues to pander to James, when by any objective standard James’ influence over the Speaker should have ended after the histrionics and machinations surrounding the failed veto override session this summer, really doesn’t help.

The other perception which is more than a little corrosive is that Schexnayder is bought and paid for by Big Hospital in Louisiana. There isn’t a lot of hard and fast proof of this, though almost everybody at the state capitol you talk to will say it’s true. And it would certainly explain Schexnayder going off on Edmonston, Beryl Amedee and the other legislators who wrote that letter about the vaccine mandates.

That said, a pair of bills Edmonston authored did pass the House in this spring’s session which dealt with vaccine mandates in Louisiana. HB 349 would have prohibited requiring vaccination verification for things like a driver’s license or special identification card, while HB 498 would have prohibited discrimination by government agencies and officials on the basis of vaccination or immunity status. Edwards vetoed both bills, and neither were brought up for a vote in the override session. 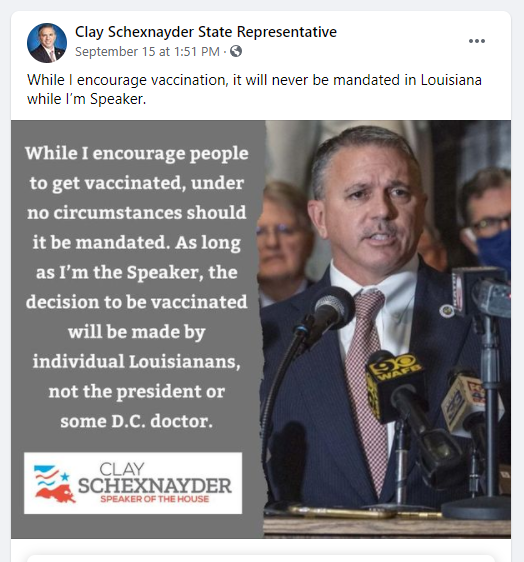 He hasn’t spoken out about LSU forcing its students to take the vaccine, and he isn’t speaking out about these employer mandates.

Schexnayder has been approached by legislators about calling a special session to deal with the vaxx mandate issue, and he isn’t doing anything about it. You would think, with 70 percent of the black community unvaccinated and a great deal of vaccine resistance to vaccines persisting among that population, that there would be Black Caucus members willing to override an Edwards veto on a vaccine mandate ban in Louisiana as several other states are in various stages of preparing.

This cuts to the question of leadership and courage, and it also cuts to the question of honesty. Is Schexnayder busily shining on his fellow Republicans and their voters while he continues to break bread with Edwards and the Black Caucus? If so, he needs to at least be honest with the people of Louisiana and let us know that’s what’s on offer.

We’ve been through this ad nauseam. Clay Schexnayder has created virtually all of the problems associated with his leadership. By refusing to act as the Republican Speaker of a Republican House, he’s made himself weak and susceptible to a leadership coup, when if he had fully embraced his own caucus and governed as the opposition leader reining in Edwards’ excesses he would have been untouchable.

Instead he’s attempting to pander to the governor. And the conservatives in the Legislature are becoming more and more angry. Trying to deny them use of the House letterhead won’t put a stop to that.

Interested in more news from Louisiana? We've got you covered! See More Louisiana News
Previous Article GURVICH: The Brilliance Of Joe Biden
Next Article SADOW: COVID Zero Is A Fantasy, But JBE Is Clinging To It