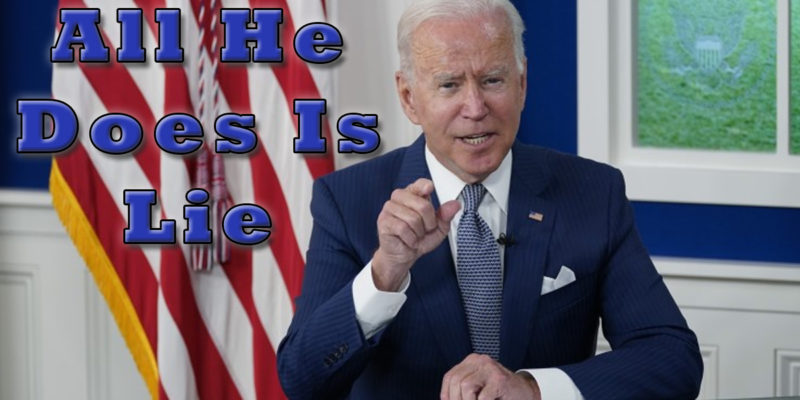 Well, how about that whirlwind of a ride that Joe Biden has put us through during his first eight months in office? Let’s go over his list of “accomplishments” to date:

Joe Biden was going to defeat COVID-19, don’t you recall? Things didn’t quite work out that way, but who could have predicted that the Delta variant would make things so difficult? (The Delta variant was Donald Trump’s fault, anyway.) And those epidemiologists who deal with flu and coronavirus strains which mutate all the time, what do they know?

We can wipe out COVID-19 – Joe told us he would do it. Why, mankind has already completely eliminated two virus-caused diseases, Smallpox and Rinderpest. Scientists around the world are working very hard on eradicating the thousands of other such illnesses which are still out there, despite their best efforts. We’ll defeat COVID-19 in short order, won’t we? Darn it, here comes another mutation…

But until we eradicate COVID-19, we have to wear masks, socially distance ourselves, and close down millions of small businesses. In order to save the country, we have to periodically shut down large parts of our economy and tell people to go home and stay there. And if they want to work, they have to wear masks and be vaccinated. To protect society, everyone will have to be vaccinated multiple times, regardless of their age, their risk, and whether or not they’ve already had COVID-19. Joe Biden has shown us he means business by snarling at those Republican anti-vaxxers and summarily taking their jobs away if they don’t fall into line. All those teachers, nurses, African-Americans, and Latinos refusing to be vaccinated must be Republicans, surely…

So how about inflation? Since Joe became President, inflation has more than doubled, which is quite an achievement considering that we are still in the midst of a pandemic. Economists used to think that events like pandemics would stifle inflation, but that’s old thinking now. If you want higher prices for food, gas, and most of life’s other basic necessities, then Joe is the man for you. Inflation is higher now than it’s been for 40 years and unemployment filings have risen in three straight weeks.

And there’s more inflation on the way, especially if substantial parts of his five plus trillion-dollar spending bills become law. Don’t be old fashioned and worry that in just a few months inflation has skyrocketed from two to five percent, because by this time next year, inflation may well be running above seven percent!

But Joe has a master plan to pay for Bernie Sanders’ Socialist-progressive multi-trillion-dollar, multi-year spending binge, and it will all be free! Joe told us so himself – it won’t cost ordinary folks a dime because only very rich people will have to pay his new taxes. He must know something we don’t, because most economists readily admit that you could seize every penny the top one percent of earners make, and the tax loot wouldn’t pay for Bernie’s spending plans. Come to think of it, Socialists always know more than we do. That’s a fundamental premise of their ideology.

What do you think about Joe’s foreign policy performance? That Afghan evacuation was an extraordinary success, don’t you think? Joe certainly thinks so – that’s what he told us himself. Anyway, he had no choice but to follow the advice of his generals, all of whom told him to get out of the country right away. Or so we thought until earlier this week, when the generals testified before Congress that they never said that.

And then there were those little dustups with France and, well, most of the rest of Europe. They’ll quiet down and all will be well, right? In the meantime, I hope you don’t have any business with the French ambassador to the United States, because the ambassador has been recalled home. France, our oldest ally, is furious with the Biden administration, but so are Germany and the United Kingdom. I wonder what the leaders of China, Russia, and Iran must be thinking right now about America’s resolve to remain the leader of the free world and defend our exposed and endangered allies? Surely, our allies can continue to count on us…

And then there’s Joe’s brilliant solution to the immigration problem on our southern border. Joe had plenty of Democrat-progressive help on all the previously discussed issues, but with the possible exception of the Afghanistan debacle, the immigration catastrophe is the one issue he owns all by himself. His hatred and detestation of Donald Trump led him to undo his predecessor’s very successful solution to this existential problem.

All Joe had to do to erase one of Donald Trump’s most outstanding successes was to issue one or two executive orders halting the building of the wall and upending our immigration agreement with Mexico. From there, it only took a couple of clueless public comments about inviting immigrants to cross our southern border, and presto, Joe had lit the fuse which ignited the conflagration along the Rio Grande River. And there’s really no cause to be alarmed about Haitians crossing the Mexican border into the United States, is there?

As I see it, there has been one common element to every one of Joe Biden’s actions mentioned in this article, and that is his willingness to confuse, distort, and hedge the facts to the point of basically lying to the American people on an unprecedented scale.

No, Joe was never going to govern as a moderate, although that’s what he told the American electorate for an entire year while he was running for office.

No, Joe was never going to command our pandemic response based on science, because political power over his fellow Americans was much more important.

No, inflation will not be transitory under this President- it will become a chronic fact of life undermining the dollar and sapping the purchasing power of our hard-working citizens.

No, a five and a half trillion-dollar spending plan is not free.

No, Joe Biden had choices in Afghanistan- in fact, he had several choices, he just managed to choose the worst one.

And no, he never intended for one moment to control illegal immigration on our southern border, and he didn’t deport most of those Haitians back to Haiti.

Take a moment to think about how awful this situation has become. Of course, I well realize that most politicians obfuscate and dodge and weave with the facts all the time. We used to be able to rely on the press to ferret out the truth, but those days are long gone, as Joe Biden knows perfectly well. That is why he is so disdainful of the American public. We’ve never seen anything like this before in all our long and proud history. We now have a President who lies to us all the time, never acknowledges or apologizes for even his most grievous mistakes, and just waits for the compliant press to move on to the next news cycle.

So here we are, eight months into the Biden administration with only forty more months to go, assuming that Providence does not see fit to intervene in this political farce over which Joe Biden presides. (And Providence usually does not intervene because of that free will promise He made to mankind awhile back.) As every new day dawns, our country becomes ever more divided and dispirited under Joe Biden’s administration.

We have a fight on our hands to take back our country. This is a fight we must win, and there is a major battle to be won in 2022. Let’s get ready…