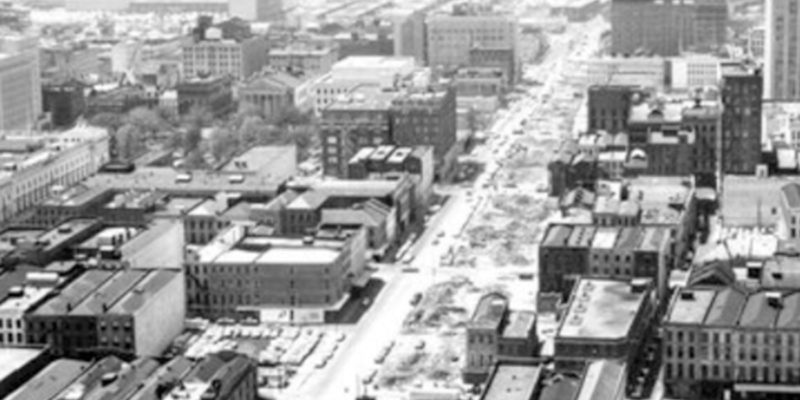 The picture at the top was taken in 1965. It’s of Poydras Street in downtown New Orleans in the early part of the city’s mid-century economic boom, which went bust in the early 1980’s and has never returned.

There’s an expression that I often use, “a city (or region) exists only when there is an economic reason for it to exist.” I would carry that a bit further, citizens of a city prosper only when the city prospers.

Sadly, my theory is justified by the recent economic history of New Orleans. Yet despite the detrimental impacts on the people of New Orleans of the realities of economic law, leadership at all levels seems more than content to ignore facts.

New Orleans is immersed in a political campaign for mayor and council. The candidates appear oblivious to the economic malaise that has eaten away at the very heart of the city, focusing instead only on the emotional toll of a sick economy, without addressing the causes.

As best I can tell not once has the media asked, nor have the candidates mentioned the malady that has plagued the city for the last 40 years, a disconnection with reality that left unchecked undermines the very reason any city exists, but this City in particular. That reason is a viable economic raison d’etre.

Questions abound and must be answered. Do potential leaders have any insight into the significance of what the city once was? Do they understand that the population has fallen from 650,000 to just under 400,000 as poverty and social ills abound? Do they understand the reasons why the headquarters of our once-proud regional banks are now far away, and we are left with a diminished financial presence? Do they get that tourism, once a small element of a more powerful economic profile, will not break the cycle of poverty or cause the next economic boom? Why have corporations abandoned New Orleans leaving behind only a small footprint where once there were thousands of white-collar jobs? Perhaps they just don’t understand, perhaps it wouldn’t be politically expedient to tell the people the harsh reality. Who knows?

There is more, much more, but there is there one resounding question that remains unasked by the media and unanswered by candidates. Why hasn’t any candidate connected the societal ills of our city with what remains of our once proud “Queen City of the South?”