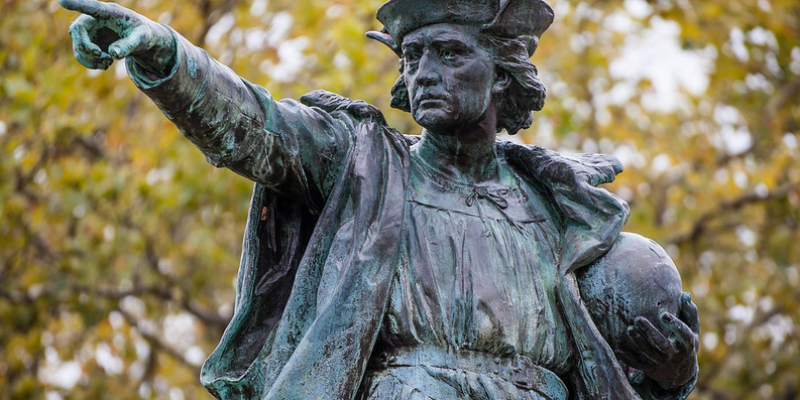 In the Seville cathedral is an impressive tomb that very likely contains the remains of the famed yet contemporarily-vilified explorer Christopher Columbus.

The doubt is rooted in that the body of Columbus traveled almost as much in death as he did while alive, having been buried and exhumed several times, initially in Spain and then shipped to the Dominican Republic and following that interred in a Havana cathedral, Cuba being the base of Spain’s colonial authority.

However history’s most famous traveler had another transoceanic trek to make when his bones were evacuated back to Seville by Spanish authorities after Cuba gained its independence.

DNA testing has indicated that the remains contained within the monumental catafalque supported by four gigantic sculpted figures are indeed what’s left of the native of Genoa.

Just as Columbus’ body has trodden the earth in life and death, his name has been spread across the hemisphere he essentially created, from the South American nation of Colombia to the American national capital and the seat of government in Ohio. (There’s even a Columbia, Louisiana, which happens to be the hometown of former Louisiana governor John McKeithen.)

Grand celebrations incorporating his personage continue to be held, numerous statues and memorials bearing his likeness mark the landscapes of American cities both great and small, and even a national holiday was created for someone who was neither a citizen nor set foot here have further emphasized his preeminent role in shaping the previous millennium- though Time magazine would bestow that accolade to Albert Einstein.

Columbus was the first historical figure I was taught about in school- and fittingly the lives and achievements of travel pioneers the Wright Brothers, Charles Lindbergh, and Amelia Earhart followed in his wake.

And then, the once-venerated Father of the New World seemingly overnight became the equivalent of a war criminal along the line of Adolf Eichmann.

The anti-history movement would make Columbus their first target and for good reason- while not the first European to land in the Americas he was the man most responsible for spreading Western Civilization (i.e. Christianity) to an entire half of the planet and thusly laid the foundation for the birth of the American superpower.

Columbus’ return to Europe would set off a mad rush by Continental powers across the Atlantic as his landing in the Bahamas on October 12, 1492 changed everything.

Yet the tangential beneficiaries of his milestone feat in exploration have denounced Columbus and by default renounced their own ancestors who populated the shores of west side of the Atlantic.

They cite the spread of diseases that were introduced from Europe to the indigenous peoples in the Americas that indirectly led to countless deaths, yet the same Columbus haters have no problem with unvaccinated people from foreign lands traipsing over our southern border bringing new strands of the pandemic that have brought tremendous suffering.

And they are far more inclined to scream about Governor DeSantis than Chairman Xi regarding COVID-19.

And in terms of plagues, is the anti-history crowd aware of where the Black Death originated?

Shall we sanction Central Asia for its role in wiping out a third of Europe via the bubonic plague?

As for the concept of conquest, I was unaware Columbus had invented this barbaric practice. Apparently, until the Italian explorer’s use of ships to move soldiers around, everyone on Earth lived precisely where they were beamed down from the Mother Ship thousands of years ago with the lines never shifting.

The sins of the world being assigned to Columbus, who is also conversely dismissed as historically insignificant, have been practiced and enhanced for deadly effect by others millennia before he was born.

It’s as if the Columbus haters have the explorer confused with Genghis Khan and his successors who actually did all of the terrible things that get pinned on the sailor.

Used the catapulted carcases of plague-infected animals as bio weapons on besieged citadels that introduced the Black Death in Europe?

That very tactic was utilized by a remnant of the Mongolian Empire, the Golden Horde.

Feel free to correct such confusion the next time you see someone in a Che Guevara t-shirt screaming about Columbian genocide.

Their problem isn’t with Seville but with Ulaan Baatar and the khanate of reality.