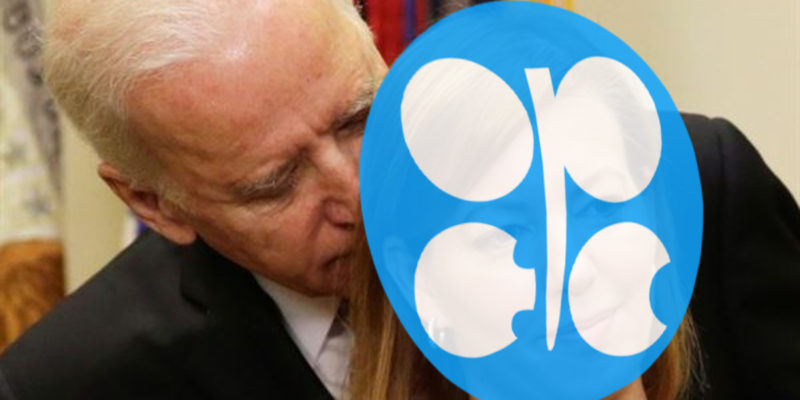 There was an interesting – we’re using that word advisedly here, because it isn’t really interesting, it’s disgusting and horrifying – exchange on Monday between a reporter and White House press flack Jen “Circleback Girl” Psaki on oil prices.

In case you hadn’t heard, a while back the Biden administration took credit for having pressured OPEC, the global oil cartel whose power over the oil market had largely been broken by American producers propelling us to the top spot among the world’s oil giants, to increase production targets. This was necessary because oil prices have skyrocketed here for a couple of reasons.

First, the U.S. federal government is spending so much money it doesn’t have that it’s devaluing our currency and making everything cost more, which means the price of oil and gasoline will necessarily rise. Second, the administration has imposed a set of tyrannical, punitive policies on the oil and gas industry domestically, handcuffing our producers at a time when our economy is trying to go back to normal and therefore the demand for petroleum products is surging after the COVID crash lows of last year.

Everything about the shortage of oil is a predictable effect of government policy. Therefore it was entirely within the Biden administration’s power and portfolio to address that shortage through sound policy and management. It abjectly failed in that regard, and was therefore forced to go begging to OPEC.

Essentially, the cartel shined Biden on, declaring higher production quotas which its members then failed to meet. From an economic standpoint, nobody at OPEC is obligated to the United States or acting in their own interests in satisfying those quotas. Not when it’s obvious prices will go higher as demand outstrips supply. Make enough oil to keep the shortages from killing the global economy, sure, but not enough to resolve those shortages.

Do that and the price will continue to rise – and with it, so will the profits from that oil production.

There’s an extremely simple solution to this, which is to put the domestic oil industry back to work. American supply fixes all kinds of problems vis-a-vis oil prices, economic growth, capital investment and so on. But politically, domestic oil is bad – a strong oil industry in states like Pennsylvania, Colorado and New Mexico, not to mention independent oil producers in Texas and Oklahoma getting rich, makes for a bad electoral map for Democrats, not to mention that the environmental groups who own this administration’s energy policy won’t be getting what they paid for.

So politics wins out over economics with this administration as always, and the price of oil keeps going up. Instead of Texas oilmen getting rich off that higher price Biden now is attempting to make Russian oligarchs and Saudi sheikhs the beneficiary by going begging at OPEC’s table.

And Psaki was asked about this on Monday. Here’s how that went…

At this point it’s pretty repetitive to say that this administration is blitheringly incompetent on the issue of oil and gas. That’s more or less incontrovertible, unless you want to say that all of this is being done on purpose. We’d agree with that if this was something closer to their core competencies; they’re not incompetent on the border, for example – they’re evil.

But nobody in this administration knows anything about how the energy business works. Just like they don’t know anything about how transportation and logistics work. You can look at the resumes of the people in charge of the agencies regulating those things and you can see clearly that they lack expertise. They think they can try to implement this Green New Deal stuff and hammer all these industries with fantasyland policy and there won’t be any measurable negative impact.

And they’re finding out that they’re wrong.

Biden is now polling at 37 percent approval according to Quinnipiac. CIVIQS has him at 39. Zogby at 36. He’s at 37 in the Grinnell/Selzer poll. This was most certainly not the plan.

The real question is whether Biden’s camp is as intelligent as Bill Clinton’s was when the bottom fell out of their first year. Clinton changed course, triangulated and took credit for the successes of the GOP majority which took office in the House after the 1994 elections. There is no evidence Team Biden has that same flexibility.