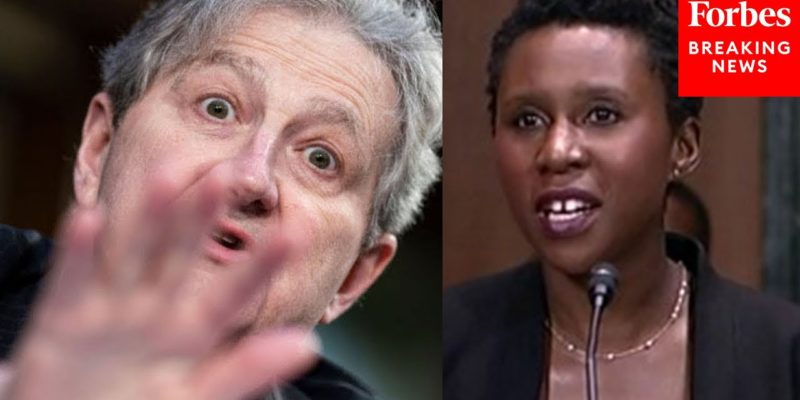 Put yourself in the shoes of, say, a Chinese Politburo member engaged in long-range strategic planning of a coming conflict with America when you watch this video clip. It’s of a Senate Judiciary Committee hearing in which Holly Thomas, a judge on the Los Angeles County Superior Court bench who’s being nominated for a spot on the federal Ninth Circuit Court of Appeals, is being examined by Sen. John Kennedy (R-Louisiana).

The questions she’s asked aren’t complicated. They’re simple. They’re the kind of questions any intelligent human being should be able to have a ready answer for.

And Holly Thomas is thoroughly incapable of answering them.

If you’re the Chinese Politburo member looking at America as a potential adversary, what does this do to/for your thinking about that future conflict? Would you be encouraged or discouraged from advocating hostile action toward a country where the Holly Thomases of the world are embedded in its leadership class?

Holly Thomas has been a woke leftist advocate her entire career. But Kennedy asking her if the Los Angeles County Superior Court is systemically racist short-circuits her completely. If she says it isn’t, despite the fact that court routinely hands out jail sentences disproportionately to black and Hispanic defendants (because black and Hispanic people in Los Angeles County make up a grossly disproportionate share of the criminals there), then she puts herself in jeopardy of being seen as a traitor to the leftist cause. What’s more, such an answer will do damage to further efforts at making a more woke judiciary in L.A. County, efforts about which she’s clearly enthusiastic.

And if she says it is, she comes off as a radical – and it gets worse from there. Because if deep blue Los Angeles County isn’t woke enough to satisfy Holly Thomas then no place is, and the “systemically racist” charge loses steam.

Kennedy knew what he was doing asking that question. Thomas could have at least given an “one the one hand, on the other hand” answer. She wasn’t even confident enough to do that.

Then there’s a legal doctrine she professes ignorance on, which wasn’t a good look, and then he asks her to name a policy she likes which has been held as unconstitutional.

This isn’t hard at all. For example, somebody who’s pro-life might say “well, Roe v. Wade has disallowed a state from banning abortions, and as a voter I would support a ban on what I believe to be the murder of innocents, so while as a circuit judge I’m barred by precedent from overturning Roe v. Wade as an American I’d like a different result.”

Thomas has lots of options on the Left, but nope – she can’t go there. After Kennedy gives her three chances to answer it he gives up and moves on to a question about universal injunctions, something the Left goes to the Ninth Circuit’s district judges constantly in search of. Universal injunctions are those ridiculous devices federal judges in, let’s say, Hawaii gave out in order to frustrate the Trump administration’s executive orders and other policies.

Thomas can’t even cite the case law providing for them.

A sane Senate Judiciary Committee would toss her with extreme prejudice from the pile of nominees. She’s clearly unqualified.

By the way, it didn’t get any better when Josh Hawley, Kennedy’s Republican colleague from Missouri, took his turn with Thomas…

Interested in more national news? We've got you covered! See More National News
Previous Article Could The Biden Administration Be Any Worse On Oil?
Next Article TOBLER: The Stats Say Jeff Crouere Is Still Wrong