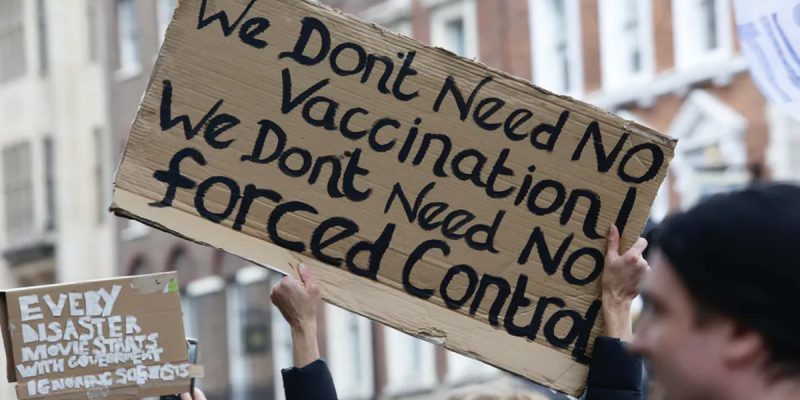 We hear about litmus tests in politics all the time, but right now we need to insist firmly on a new one:  Any elected official in the State of Louisiana who does not support and/or implement a ban on vaccine mandates should be voted out of office next time his name appears on a ballot.

Far from bringing any resolution and healing to society, these mandates are ripping it apart in a number of ways.

First, they are killing the economy.  Stories are popping up all over the place about employees striking or quitting or being fired over mandates by governments and corporations:  police, army, navy, airline pilots, nurses, even bus drivers.

With so many people becoming or staying unemployed, it doesn’t take the gifts of a prophet to predict that the wheels of productive activity will slow considerably and that current supply chain problems will grow worse because of mandated injections.

Second, they are turning people against one another.  One of the Orthodox bishops of Australia and New Zealand, who took the name of the great St Siluan of Mt Athos (+1938), spoke powerfully about this in an open letter he wrote:

I am compelled by my conscience as Bishop of the faithful entrusted to me, to address by way of this open letter my deep concerns regarding the situation our Nation has spiraled into during this current health crisis, which we fear is becoming more of a crisis of humanity than that of health itself.

The Latin proverb Homo homini lupus est, “A man is a wolf to another man,” has tragically found its new form and expression in today’s crisis as: “Homo homini virus est! Man has become a virus to his fellow man” in this ever-changing world and dystopian looking society. This is not hyperbole; it is happening right now around us. Just look at our workplaces, formerly places of collegiality and friendship, now rapidly digressing into segregation, suspicion, bullying and ridicule of those who have not yet received the green ticket!

A vivid example of this was presented to me by one of our faithful in possession of a medical exemption, who has been labelled a health risk by their colleagues and has ever since been treated with contempt and discrimination, as if they were a leper, a walking virus.

This type of behaviour would previously be deemed unacceptable, however in the ‘new normal’ of today’s dystopian society it is subtly encouraged through media hysteria which is fueling mass psychosis, in which fear and anxiety, mistrust and segregation have become the new Gospel!

Is the same not happening here in Louisiana, where we are made to distrust, fear, and even hate those who will not take a COVID shot?  But this is antithetical to the freedom God has called us to exercise.  Bishop Siluan continued:

No blackmail or coercion, including that of vaccination is morally acceptable. Without freedom of choice there is no humanity. Orthodox Christianity professes that the human person is created in the image and likeness of God and that the central quality or attribute of this Image is the gift of free will, the ability to make an informed and free choice.

For example, following Christ in the Orthodox Church is ontologically significant because following Christ leads to formation, i.e., human transformation and completion = perfection = salvation. However, through the lens of Orthodox soteriology this is a synergetic act(ion) which entails a free disposition on humanity’s part. Christ himself says: “If anyone DESIRES to come after Me, let him deny himself, and take up his cross, and follow Me” (Matthew 16:24). Christ leaves us with a choice, does not cancel out human freedom to choose, does not impose salvation.

St Iranaeus also echoes this: “…because God made man a free agent from the beginning, possessing his own power, even as he does his own soul, to obey the behests of God voluntarily, and not by compulsion of God. For there is no coercion with God, but a good will towards us is present with Him continually. And therefore does He give good counsel to all. In man, as well as the angels, He has placed the power of choice…” (St. Iranaeus, Against the Heresies, IV, 37, I). This should not be equivocated to an anti-vax position, but rather one of informed consent, also considering any ethical concerns that those of faith might have.

Third, the COVID shots, as shown now by the statistics of various government agencies and other respected researchers, are not working as advertised.  Daniel Horowitz lays out some of the numbers for us:

For these reasons (to which others could be added), the next time the Louisiana Legislature goes into session, they need to pass a bill that outlaws all vaccine mandates.  The hard work has already been done for them; Iowa’s Legislature has already introduced a well-crafted bill that our own legislators could revise easily enough for Louisiana’s own use.  Mr Horowitz writes again,

The crux of the bill, Iowa SF 193, sponsored by Sens. Guth, Johnson, Schultz, Whiting, and Carlin, categorically bans all human rights violations in relation to “Pfizer” government mandates. It prohibits an employer from failing or refusing to hire, discharge, penalize, or otherwise discriminate against an employee with respect to compensation or the terms, conditions, or privileges of employment based on the employee’s vaccination history or the refusal of the employee to receive a vaccine or provide proof of immunity. It provides a cause of action in court to anyone discriminated against, along with a prescribed remedy of back pay plus 10% from the employer.

The only thing that perhaps should be added to this bill is a requirement that the State of Louisiana provide packets of low-cost supplements (zinc, Vitamin D3, quercetin, ivermectin, etc.) at all State-funded clinics and hospitals that anyone can pick up for free if they have a suspected or confirmed case of COVID.

But while we wait for the Louisiana Legislature to get their act together on this front, Louisiana’s ports should be echoing Florida’s cry to the world:

TALLAHASSEE, Fla (October 6, 2021) – With more than 60 cargo ships moored off the coast of California, unable to unload thousands of shipping containers filled with products that Americans use or consume daily, the Florida Ports Council is answering the global supply chain crisis by encouraging ships to unlock the logjam by calling on Florida seaports.

Clearly, California is no longer the most efficient way to move consumer goods to either the East Coast or even the Midwest. Florida has the capacity to be the more efficient way to connect commerce to those locations.

The COVID policies of Louisiana’s government have caused a lot of carnage (economic, physical, mental, religious, and more) over the last year and half.  It is time they started to undo the damage.  The actions outlined in this essay are an easy place to begin.

Perhaps we could summarize all the above in one line:  Any politician who is remotely populist, Christian, pro-worker, pro-family, pro-health, and a supporter of a sound economy should be glad to support a vaccine mandate ban across the board.

Interested in more news from Louisiana? We've got you covered! See More Louisiana News
Previous Article Landry Is Returning The Guns & Banks Fight To The Bond Commission
Next Article The Trump-Cassidy Thing Is Back On The Front Burner…