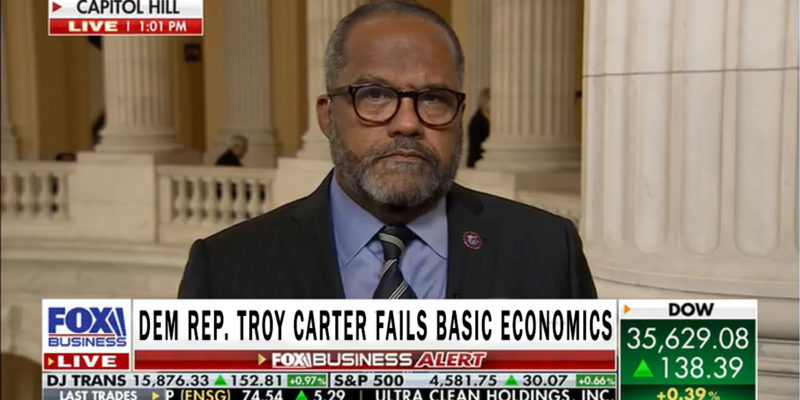 When Cedric Richmond vacated his congressional seat representing Louisiana’s 2nd Congressional District to join the Biden administration at the beginning of this year, we said that the resulting special election to replace him was going to be a race to the bottom. And we were right, because the campaign Troy Carter ran to win that seat over Karen Carter Peterson, Gary Chambers and Claston Bernard, among others, was a pandering mess of leftist bromides.

The conventional wisdom following Carter’s victory, spun out by the state’s legacy media on behalf of the James Carvilles of the world, was that he was going to Congress because voters rejected wokeness and Hard Left socialism. It was a lie, of course; Troy Carter is every bit as woke and socialist as Peterson and Chambers, and everything he did in the state senate and on the campaign trail this year before winning that race proved it. The only reason he won was that Carter isn’t as obnoxious as Peterson and Chambers; otherwise there isn’t a whit of difference between them.

Nothing has changed since he took office, either.

It isn’t that Carter is some dime-store Trotsky or something. Troy Carter is a political hack. He says what the Democrat Party leadership tells him to say. If that party was run by Scoop Jacksons and Dick Gephardts, Troy Carter would sound like one of them. But it’s run by Nancy Pelosis and James Clyburns now, and Troy Carter parrots their statements.

No matter how ridiculous or stupid.

That this is true was never really arguable, but any possible differing opinion was blown away yesterday when Troy Carter went on Neil Cavuto’s show and put out the most idiotic economic illiteracy anybody could conjure up. He literally took a meat tenderizer to the dismal science, and Cavuto was simply far too polite to call him on it. That’s a shame, because Neil Cavuto knows well that Troy Carter’s insistence on more government spending to combat inflation is a pristine failure of basic economic theory.

If you didn’t see this verbal rape of basic economics, here’s video and a transcript…

A transcript, courtesy of Breitbart.com…

Carter disagreed with [relevant remarks begin around 3:15] “the notion that somehow the Build Back Better or the infrastructure plan will negatively impact inflation,” because there have been “several Nobel Peace Prize economists who vehemently disagree with that. Listen, when people make more money, they spend more money. When you make money, it doesn’t just go into a black hole in your backyard. It goes into the stores, it goes into school, it goes into homes and cars and providing better lives for our children. So that money that’s in –.”

Host Neil Cavuto then cut in to ask Carter how he would respond to people who have lost purchasing power even though their wages have gone up.

Cavuto then cut in to ask if that will ease inflation’s bite.

Carter answered, “No. The inflation bite will be eased when we start to invigorate our economy, and we invigorate our economy by pumping money into it to stimulate it. It’s not unlike anything that we’ve done before, except the magnitude of the dollars that we’re putting in with Build Back Better and infrastructure are life-changing and unprecedented. And most economists — I mean, there will be some that obviously disagree, you and I may disagree, but from my vantage point and the economists that I’ve looked at and listened to suggest that the money that we’re putting in, we’re not talking about Bs, we’re talking about Ts, trillions of dollars for infrastructure, for housing, for rail, for [the] environment, these are all things that’s going to pay dividends for years and years to come.”

What’s the definition of inflation? Investopedia has a pretty good little description…

Understanding Price Inflation
The nominal amount of money available in an economy tends to grow larger every year relative to the supply of goods available for purchase. This overall demand-pull tends to cause some degree of price inflation—when there’s not enough supply to satisfy demand, prices usually move upward.

Price inflation can also be caused by cost-push, which is when the cost of inputs to the production process increases. If a company has to pay higher wages and more for the raw materials it uses to make the final product, a large chunk of these extra expenses will likely be passed on to the customer in the form of higher prices.

You can’t just print money and throw it out of helicopters. Debasing your currency to spark consumer demand without a corresponding increase in supply means you’re going to have too much money chasing too few goods, and that means the price of those goods will go up.

In other words, what Carter said is categorically, demonstrably wrong. You don’t tax and spend, or borrow and spend, your way into prosperity. You become Argentina, Mexico or Venezuela – or maybe the Weimar Republic – that way.

Everything the Biden administration and its lackey Democrats like Troy Carter are doing is wrong. They’ve poisoned the supply chain with stupid policies like outlawing independent contractors in California which has crippled the trucking industry (and lots of other stupid ideas), they’ve driven the cost of labor through the roof by paying people not to work, and they’ve debased the currency by running unheard-of deficits. Inflation is now mounting as a result, and the economy is not growing. It only grew at a puny 2 percent in the third quarter, which portends a recession.

The way you beat inflation is a hike in interest rates, which slows down demand so that supply can catch up. But doing that could be disastrous, because the federal government is $28 trillion in debt and high interest rates will make it insolvent in no time flat.

That’s a long way of saying that the idiocy Troy Carter is spouting will literally destroy the U.S. economy.

Neil Cavuto won’t call it out because he’s too nice (and frankly lacks the courage to stand up for the investors who watch his show). But we’ll say it. This guy Carter is too stupid – or perhaps, like all Democrats, he just thinks the American people are too stupid – for survival.

We’re stuck with him, because once elected in those districts the Troy Carters of the world generally leave office in handcuffs or a pine box. But the future of our great country is dependent on Troy Carter being as irrelevant as possible. It’s that serious.