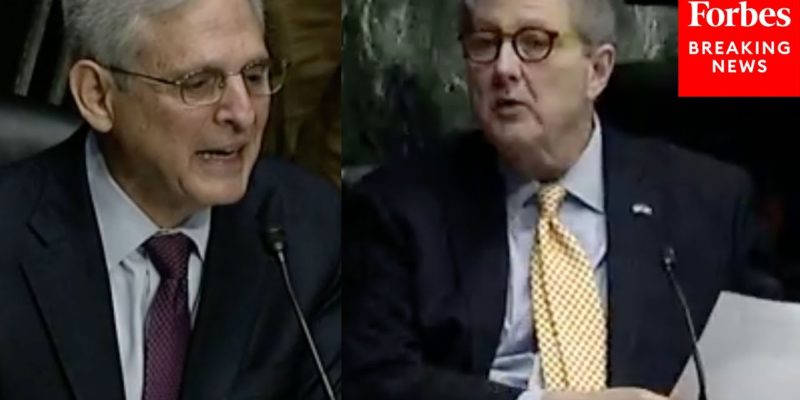 When Merrick Garland was appointed as the Attorney General in the Biden administration there were people who saw it as a bright spot and an indication Joe Biden was the “moderate” Democrat president he’d been sold as from the beginning. This assertion was made on the basis that Garland was the “moderate” Supreme Court nominee who had been denied a confirmation hearing by Mitch McConnell and the Republican majority in advance of the 2016 presidential election.

Yesterday, as it was repeatedly said in a Senate Judiciary Committee hearing, we saw why McConnell’s shelving of Garland’s nomination was a public service.

Garland has been under fire, justifiably, ever since he put out a memorandum to the FBI directing them to begin scrutinizing unruly parents who get out of line at school board meetings. The circumstances surrounding the memo, which was plenty obnoxious enough in its own right, make things a whole lot worse. The memo went out just five days after the White House received a letter from the National School Boards Association demanding action about those parents and whining about how they were making school board members unsafe.

The NSBA letter, it turns out, was a put-up job. It had been cooked up at the White House and farmed out to the NSBA as a political exercise very much akin to the Democrat Party’s efforts to spin up the Jan. 6 protests and riot into an “insurrection” more dangerous to democracy than anything since the Civil War. The letter was pure narrative, and it was an attempt to affix the “domestic terrorist” label to people like Scott Smith, the Virginia plumber whose ninth-grade daughter was raped in the girls’ bathroom of a high school in Loudon County and who was less than satisfied with that county’s school board in its efforts to cover up the incident.

Five days after the letter went in to the White House, Garland’s memo to the FBI went out. That was an obvious clue that both the letter and the memo were White House productions and this whole thing was a stupid political stunt by Biden’s handlers – who we know beyond a shadow of a doubt are morons with overstuffed opinions of their own competence and strategic acumen.

The memo says it’s aimed at “threats of violence” rather than protected speech, but there aren’t any real examples of such threats – and certainly no nationwide conspiracy to intimidate school board members which would invite federal action. One-off violations of the law by parents angry at any of the myriad abuses being committed by local school systems (transgender advocacy, critical race theory, mask and vaccine mandates, remote schooling) are local law enforcement matters, not fodder for the FBI. Further, the memo makes clear it’s in response to the NSBA letter, which is problematic since the NSBA has since withdrawn the letter amid a colossal backlash which resulted in more than a dozen state school board associations repudiating it and two – Missouri and Ohio – actually withdrawing from the NSBA over the letter. That the Biden administration has hired the NSBA’s president following the ruckus is another dead giveaway this was all pure political narrative.

So all of this was nothing more than a bad political stunt by Biden’s handlers – a stunt which might very well have caused Virginia to flip red in next week’s elections and put public education reform front and center as a winning issue for the Republican Party in 2022 and 2024.

The thing is, though, the Attorney General and the Justice Department are not supposed to be joined at the hip with the political hacks in the White House. There is supposed to be some independence there. The Attorney General is the chief law enforcement officer in America, not some partisan operative. Garland has shown he’s the latter with this memo, and that has Republican senators spitting mad as they should be. Think about what might have been if Jeff Sessions, Donald Trump’s first AG, had taken the hyperpolitical angle in his first few months on the job. There would have been no Trump-Russia controversy to speak of, and in fact the Obama administration’s alumni would have likely all been indicted.

Which isn’t to say that would have been a far superior outcome to what happened. Democrats would still be crowing about Russian influence, as it wouldn’t have been so thoroughly debunked, and people like John Brennan, Peter Strzok and Bruce Ohr would be considered martyrs rather than the shady/criminal actors they certainly appear to be now.

Garland’s appearance in front of the House Judiciary Committee didn’t go well, as he attempted to play dumb and stonewall his questioners on the topic of that memo. The Senators took note and were quite ready for him.

Here was John Kennedy, who said in a Fox News appearance yesterday morning before questioning Garland that he thought the Attorney General was more of a “vessel” than a protagonist in this mess. He repeated that during his questioning of Garland.

Ted Cruz’ questioning was a thorough cross-examination of Garland on the subject of his son-in-law having a company which produces educational materials based on critical race theory and sells them to school districts across the country, and the ethical implications of Garland siccing the FBI on parents who object to that teaching…

Tom Cotton told Garland he ought to resign…

Garland came off as weak and disengaged, and his responses were dissembling and uncommunicative. He’s a hack. And it’s pretty obvious he’s going through the motions because this wasn’t his circus; it was the White House’s.

But because he’s carrying water for the memo, that shouldn’t avail him anything. Garland belongs on the list of Biden apparatchiks who ought to be impeached as soon as the Republicans retake the majority in the House.