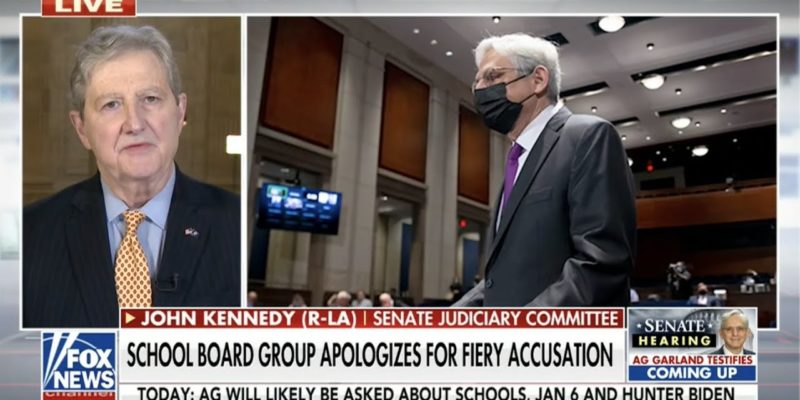 This morning, in advance of Attorney General Merrick Garland’s appearance in front of the Senate Judiciary Committee today, Sen. John Kennedy (R-Louisiana) did a segment on Fox News to talk about Garland’s decision to sic the FBI on public school parents expressing disapproval of some of the worst examples of leftist indoctrination and incompetence in those schools.

It has become a major issue, one which promises to flip Virginia from blue to red in next week’s statewide elections. The Biden administration’s rigid defense of the leftist ratchet in public education is causing outrage and panic, and yet there is no sign of a cooling-off or backing-down from this position. In fact, after the National School Boards Association withdrew a letter asking for Garland’s direction to the FBI to attack the parents, Garland continued with that direction.

And this came after the state school board associations in Missouri and Ohio withdrew from the NSBA.

It’s clearly a colossal blunder and yet they aren’t backing down.

Kennedy said Garland is really just a stooge for the administration and that this comes from the White House. And that’s not all he said.

In today’s American Spectator, you’ll find a column of mine playing out this unfurling disaster over the next few years and what effect it could have on public education in this country.

They’re not going to give up control without a fight. The problem is the battlefield is becoming very unfriendly to them.

They’re going to lose the fight. If they don’t lose it in Virginia, they’re going to lose it in the midterms next year. And when the Democrats take a hard spanking from the public, with the insanity and incompetence of the education establishment as a front-and-center issue which brings suburban moms home to the GOP from their anti-Trump vacation in 2018 and 2020, it’s entirely likely that Weingarten and Garcia and some of the other education establishment figures out there begin taking fire as scapegoats for the Democrats’ losses.

They can’t abandon those unions, obviously. The teacher unions funnel far too much money into the Democrat Party for them to go cold turkey. But if a few vulnerable “centrists” here and there who survive what’s coming in 2022 (or, like Joe Manchin and Kyrsten Sinema, come up for re-election in 2024) begin peeling off in order to save themselves and agree to work with Republicans on expanded school choice, well…

It could be Randi, bar the door.

Public policy is the only thing preventing the creation of a true educational marketplace. Nothing about public education really serves the needs of parents and kids anymore, and polls show it. The market is already moving toward diversity in educational methods and institutions. The minute funding is freed up for those alternatives they’re going to explode, and they’ll do so at traditional government schools’ expense.

There’s an old saw about how someone goes broke: a little at a time, and then all at once. We’re beginning to see how that might happen to the public-school mafia. Next week’s events in Virginia could well start a cascade which is long overdue.

Watch the Virginia elections next week, and watch wholesale public education reform – centered around putting all taxpayer education funding in the hands of the parents – become a prime issue on the GOP side. It’s now a winning issue because the public is coming to understand the corruption and extremism of the people in charge of the educational system in this country and the undue influence they have over the Democrat Party, and Republican consultants are now telling conservative politicians the time to get aggressive about change is here.

Virginia and the midterms could create a whole new public consensus on education. If and when it happens we’ll look to the idiotic overreach by Garland and the Biden administration and their crusade against activist public school parents as the moment that new consensus began to solidify.