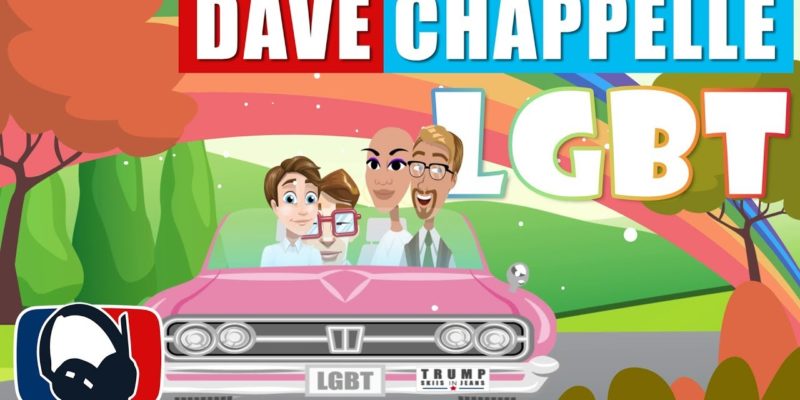 If you haven’t seen The Closer, the Netflix comedy special Dave Chappelle put out a couple of weeks ago, you really should. Not because it’s funny – it is, but Chappelle has done lots of funnier sets – but because it’s a brilliant piece of social commentary that almost everybody across the political spectrum can appreciate if not agree with.

Chappelle is not a conservative. He’s almost assuredly a Democrat. But he’s not a leftist, and he believes very passionately in the First Amendment.

Anybody who’s a stand-up comic has to. If you aren’t insistent on the freedom of expression, how on earth could you possibly be a comedian?

Except it’s clear there aren’t as many believers in the First Amendment on the comedy scene nowadays. Too many of today’s stand-up comics are going for applause, not laughs. They regurgitate snarky leftist talking points, most of which lack basic elements of humor and essentially deny humanity to the targets of those statements, rather than tell jokes.

And everybody has noted the death of comedy.

Chappelle, who belongs in the pantheon of the great stand-up comics along with Jerry Seinfeld, Rodney Dangerfield, Eddie Murphy, Richard Pryor, George Carlin, Steve Martin and others, might be the only one actively fighting to keep humor alive. And he’s making a colossal amount of money doing it. Netflix is paying him more than $20 million per comedy special, or at least they were.

But when he leaned into making fun of the “trans” community – as he has made fun of literally everyone else in America – Chappelle put his head in the lion’s mouth.

This was the joke which started the trouble…

Chappelle’s characterization of the trans crowd is absolutely spot on. He doesn’t say what everybody knows once they’ve thought about the issue – namely, that the trans argument destroys the gay and lesbian argument. How does it work to say “I didn’t choose to be gay; I was born this way” when the trans folks most definitely were NOT born this way?

And yet they’re all in the same car. Talk to gay people and while almost all of them certainly sympathize with the difficulty of fitting into society as someone who’s “different,” the trans crowd doesn’t really help their case and they know it. There are lots of gay people who object to being lumped in with them because they can see the problem.

Chappelle points that out in a hilarious way. In fact, he points it out in a way which isn’t really unfriendly to the trans crowd.

But that got him unloaded on, and he’s been labeled a “transphobe” on Twitter, which he correctly then said “is not a real place.”

Which only made things worse.

Throughout The Closer, Chappelle notes that the cancel mob is gunning for him with everything it has. It’s a defiant, come-and-get-me exposition. Toward the end, you find out why.

The story of Daphne Dorman isn’t a funny story. It isn’t a joke about transgender people. It’s a human tale. Dave Chappelle had a friend who was a trans woman and a comic who he gave a break to, and Daphne Dorman defended Chappelle from the trans crowd on Twitter.

And after the backlash from the trans people, Daphne Dorman committed suicide.

Chappelle didn’t accuse the trans people of causing it, but the inference is there. And that was way too much for these people to handle.

Netflix has a few trans employees, who after The Closer appeared on the streaming service decided to raise hell about it and demand it be taken down.

So far, that hasn’t happened. But the controversy, bizarre as it is, has not gone away. And Chappelle isn’t giving an inch. In fact, on Monday he released this…

This isn’t just a controversy about a comedian. This is a turning point in American cultural history. If they cancel Chappelle and destroy his career, when there is so little meat on those bones and when it is so obvious he’s nothing like what they claim he is, then Bizarro World has descended on America and this is no longer a free country.

The trans crowd being in charge of arbitrating our free speech is the most dystopian circumstance this country has ever seen. People who insist not only on denying their own biological reality – which is their business and not anyone else’s – but imposing that denial on everyone else are the group singularly poorly suited to judge the expression of others.

And yet this is what Dave Chappelle is facing when, as he says, those who know him are not angry with him.

It’s been said again and again that arguing with crazy people is pointless and destructive. But we are at a point where Chappelle is forced to argue with them on our behalf. He must be supported in that endeavor, because without that argument we will lose something very dear to us, and we will not be the same society.