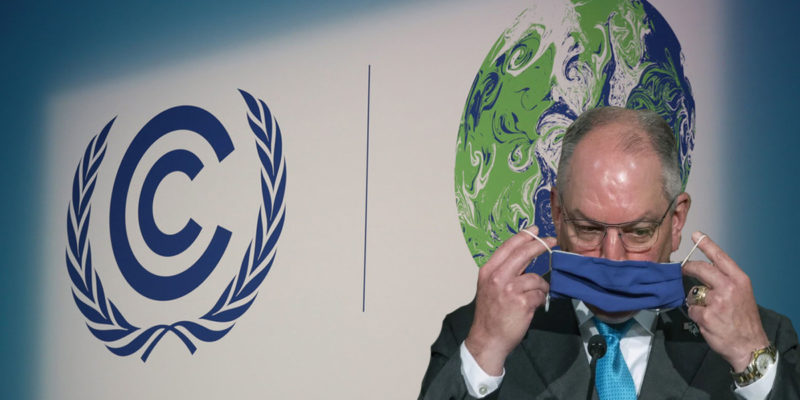 The modern economic history of Louisiana has been written around one thing, energy production. All else pales in comparison. So why has the governor of Louisiana, along with a flock of his political pals, jetted off to Glasgow to genuflect on the altar of far-left “green“ politics?

Well, we already know that this governor has no compunction about taking questionable “economic development” trips on the public dime, trips that most Louisianans would consider great vacations. Remember in his first term he jetted off to Israel and Rome, two spots that offered virtually nothing to Louisiana, but are always high on the list of tourist destinations.

Of course, there could be other reasons for the trip. Support of a flailing President always helps one’s agenda. Support for a Democratic Party that has lost the trust of the American people could be another.

But let’s ignore my cynicism and look at this trip in particular. This trip has been promoted as a way for Louisiana to convert to a green energy economy. In order to justify his newfound love of green industry, the governor has to acknowledge the validity of the narrative proffered by green ideologues. He effectively admits to the world that the future holds no place for the assets that Louisiana possesses so much of; oil, gas, and the manufacturing related thereto.

Effectively he acquiesces in the concept that our impoverished state must abandon its main industries and, no matter the pain nor the time involved, has no alternative but to reinvent itself in line with industries that fulfill their politically correct concepts.

Back home the message to our people is, “Get over it, now that the jobs that we have depended upon for generations have no value, untold numbers of you will just have to find new employment in industries that don’t even exist.” Paradoxically, up to now he has rejected any attempt to reimagine our state into one that would be attractive to commerce. But now he has had an epiphany and he is all about a time-limited, over-hyped green apparition.

Time-limited? Let’s be frank, there are no green sources of energy that even come close in comparison to abundant and economical fossil fuels. Only because government massively underwrites wind and solar energy are they even considered by Americans. Simply put, without subsidy Americans would reject current green energy sources because prices would go through the roof. And in order to push the agenda, government under Biden has adopted policies that drive up the cost of fuel so that Americans will use far less.

Americans want to maintain the lifestyle and prosperity that we have enjoyed for generations. To sustain that requires plentiful, low cost, and dependable energy, something that current green technology doesn’t offer. So, the choices are: either Americans give up our lifestyle, bankrupt the country, or maintain a reliance on fossil fuels. Our people will never be willing to surrender our lifestyle, it just won’t happen, and we will never have the resources to finance green energy throughout a world that in most cases doesn’t want it. Therefore, there is no doubt fossil fuels are here to stay. The growth of solar and wind energy will be constrained as people realize that they are far too costly for the benefit. The result is that a whole lot of what is today called green industry will be time-limited and will ultimately disappear.

Eventually clean energy will be economical, but not yet. In the long term, as technology improves there will be other sources of energy such as nuclear fusion that will help us intelligently decouple ourselves from fossil fuels. It is those technologies that offer economy and abundance, not wind or solar.

But today as Americans learn more about what Democrat leaders plan for their future, they are growing suspicious of the outcomes. They are re-evaluating support for a political party so willing to trade away or tax away what they enjoy. They are skeptical of a party that abuses their trust by purposefully driving up the cost of fuel in order to limit its use by ordinary Americans. As a result, in the very near future American voters will send their loud vote of no confidence in Democratic leaders, rejecting Democrats’ affinity for radical changes to the American way. When that occurs so will go the egregious subsidies and all the fact cats who have queued up at the trough to grab a piece of the green action. And so will go many of the green industries that sprang up to tap into that action, industries that the governor has placed at the top of his plans for Louisiana.

I am not saying that we must surrender to some inevitable global warmed future. Intelligent leadership must be cultivated that will demonstrate a clear and logical time frame to slowly wean Americans off of fossil fuels. For my generation we saw just such leadership when President Kennedy announced that America would be landing on the moon within ten years. That was bold leadership, leadership driven by setting realistic goals and staying the course to those goals. We would be well served if a Louisiana leader would arise, one that would give America a long-term vision for a non-fossil fuel future, a vision that couples science to economics without emotion or greed, a leader whose vision doesn’t destroy the prosperity of Americans in order to satisfy far-left ideology. A leader who understands that without the slow weaning process, the path the current governor has embraced is one that would lead America back to the equivalent of the late 19th century. That would be leadership to make Louisiana proud.

I am an optimist when I say that the clock is ticking toward the end of our national suicide by green energy madness. In fact, under the next President national fossil fuel independence will once again help America regain what the current President has so foolishly thrown away. Once the radicals have left the stage the opportunity will be there to develop an ideology that will couple a reasonable time frame to end fossil fuel dependence with a guarantee of prosperity for America. That bodes well for Louisiana, if not for John Bel Edwards and his legacy.

Let’s get past the radical rhetoric, let’s agree to slowly wean off of fossil fuels in a manner that doesn’t devastate the American people. Let’s have a vision of pathway to a world of limitless non-polluting energy. We can do it; we have done it. Remember the moon!