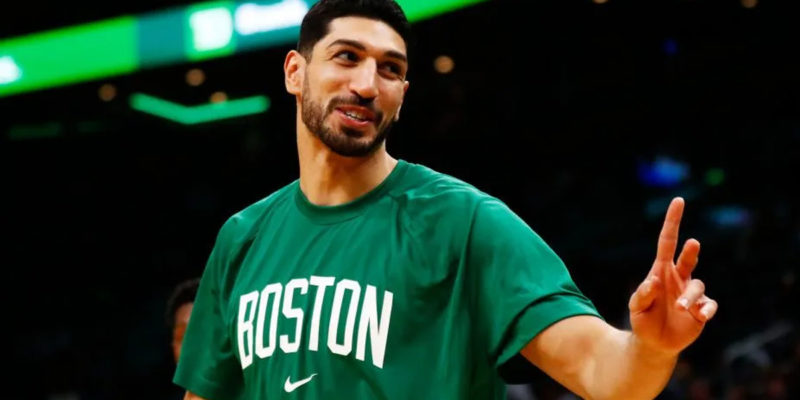 As the country deals with the consequences of more than two million people breaking our laws and illegally entering our country at our southern border, it is refreshing to remember those individuals who become American citizens the right way.

One of our new American citizens plays center for the Boston Celtics, Enes Kanter. He is in his eleventh season in the National Basketball Association (NBA).

Starting today, his new official name is Enes Kanter Freedom. In honor of becoming an American citizen today, he added a new last name, Freedom, which has a very American ring to it.

Kanter Freedom is the type of American citizen our country desperately needs. He will be called Freedom because he appreciates what all Americans still possess, which is the right to act, speak, write, and think without restraint.

In an NBC interview in January of 2021, Kanter Freedom expressed his appreciation for this country and his excitement about becoming an American citizen. He said, “I’m even thinking about adding an American name. I think it’s an amazing honor to become a citizen here. I’m just like why not? Why not add an American name?”

There is nothing more American than freedom. This basic human right is what our country used to represent to people across the world. Unfortunately, American freedom is currently under constant assault with mass surveillance, censorship, lockdowns, mandates, and government overreach into every area of life for the average citizen.

By changing his name, Kanter Freedom reminds all Americans why our country was established by our Founding Fathers, to be a bastion of human liberty. Today, the mere mention of our Founding Fathers causes hysterical leftists to shout “racism.” Fortunately, most Americans reject these woke fools and understand that our legacy is precious and needs to be recognized, honored, and appreciated.

For years, Kanter Freedom has been a champion of human rights. He has used his platform as a professional athlete to condemn political oppression in his native country of Turkey.

He has also been on the forefront of the effort to expose the human rights abuses in communist China. Kanter Freedom has condemned the communist Chinese for their treatment of Tibetans and Uyghurs, as well as their repressive crackdown of citizen protests in Hong Kong and their abusive and militaristic threats toward the country of Taiwan.

In a recent tweet, Kanter Freedom noted that “Tibet belongs to Tibetans. I am here to add my voice and speak out about what is happening in Tibet. Under the Chinese government’s brutal rule, Tibetan people’s basic rights and freedoms are not existent.”

As an NBA player, he has worn shoes with slogans such as “Free Tibet,” “Modern Day Slavery,” and “No More Excuses.” He has also highlighted the fact that Nike uses “modern day slavery” to manufacture their shoes in communist China.

In a recent CNN interview, Kanter Freedom noted that NBA officials tried to force him to remove his “Free Tibet” shoes before a recent game at Madison Square Garden. Thankfully, he refused to be intimidated and did not follow their orders.

He has courageously plotted this path while playing in the NBA, which is heavily involved with the communist government of China. Kanter Freedom felt so pressured that he asked NBA Commissioner Adam Silver if he was violating any league rules with his public statements about communist China. Silver assured him that he was not “breaking any rules.”

While the NBA has grudgingly allowed him to express his views on human rights, the communist government of China has been less tolerant. The Chinese media conglomerate Tencent banned all Celtics games from their network, no doubt in response to Kanter Freedom’s comments.

Along with advocating for human rights, Kanter Freedom has not been shy about calling out NBA superstar Lebron James for his total hypocrisy. Frequently, James has posted negative comments about conservatives such as former President Donald Trump. Recently, he mocked Kyle Rittenhouse for crying during his trial.

While James has been eager to tangle with conservatives, he has said absolutely nothing about the human rights abuses of the Chinese government. Recently, Kanter Freedom wore shoes displaying an image of Lebron James bowing to accept a crown given to him by the communist dictator of China, Xi Jinping.

Of course, Kanter Freedom is right about communist China. The world has allowed the communists to brutalize minorities in their country, use slave labor and prevent their citizens from enjoying basic human rights.

Today, there is international concern about the fate of Chinese tennis star Peng Shuai, who mysteriously disappeared after accusing former Chinese Vice-Premier Zhang Gaoli of sexual assault. While Shuai made brief appearances in a video chat and at a restaurant, there is still tremendous concern about her safety.

Along with the Shuai controversy and China’s horrible record on human rights, the communist dictatorship lied to the world about the origins of COVID-19. The pandemic started in China much earlier than previously announced by the government. Sadly, the deadly virus has spread throughout the world, killing millions of people, and causing trillions of dollars in economic damages.

The government of China is responsible for this carnage, which is why their communist dictatorship is not allowing the World Health Organization (WHO) to access their laboratory in Wuhan to investigate the origins of COVID-19. This refusal will prevent the WHO from gaining valuable information that can assist them in preventing the next worldwide pandemic.

Because of their role in the deadly spread of COVID-19 and their horrible human rights record, it is obscene for athletes from around the world to be gathering in Beijing, China for the 2022 Winter Olympics. As Kanter Freedom tweeted, “The genocidal Chinese government and the insecure tyrant behind it all XI JINPING must not be allowed to host the upcoming Winter Olympics.”

Kanter Freedom is correct. It is time for the communist government of China to suffer profound consequences for their tyranny. Let us boycott the 2022 Beijing Olympics.