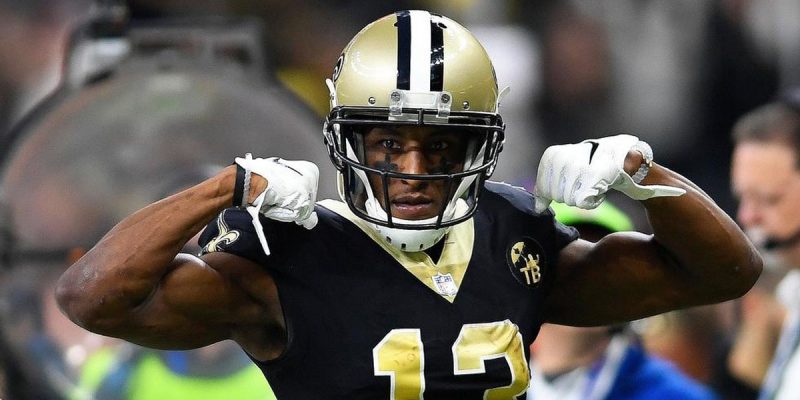 Michael Thomas is done for the year, and the wide receiver position is a hot mess for the New Orleans Saints.

Injured Saints wide receiver Michael Thomas announced in a tweet Wednesday (Nov. 3) that he will “not be able” to return to the playing field this season.

“I’ve always been a man of faith and these past few months, my faith has been truly tested,” Thomas wrote. “As many of you know, early last season I injured my ankle and worked extremely hard over the next few months to get back in time to finish the season.

“Unfortunately, the rehab didn’t go as planned and earlier this off-season it was apparent I would need to have a procedure to repair the injury. … Unfortunately, there has been another small setback which we will have to address. To my displeasure, I will not be able to make it back in time for this season.”

What this means is the Saints’ offense is going to have to slog through the mud without starting quarterback Jameis Winston or Thomas the rest of the way, and that’s going to result in the worst passing offense in the NFL for the nine games left in the season.

Yesterday afternoon the league’s trade deadline came and went. Saints GM Mickey Loomis tried to find a wide receiver in a trade, inquiring after the availability of Odell Beckham, Jr. from the Cleveland Browns among others, but couldn’t make a deal. The Saints are hard against the salary cap and don’t have much flexibility at this point.

Truth be told, Thomas was unlikely to ever play for the Saints again. He’s established himself as a bit of a malcontent, which is unfortunate – he’s just about the most productive receiver in the league when healthy, and he carried the Saints’ passing game over the past three years.

Going into the season the Saints didn’t really have a true No. 2 receiver. They have Marquez Callaway and Tre’Quan Smith, who are really No. 3’s, and they have Deonte Harris, who’s a return man and a slot guy. Harris is the best playmaker on the team outside of Alvin Kamara, but his small size means trying to make him a go-to receiver is risking injury in a major way. Harris has already missed several games with a bad ankle and just returned for Sunday’s 36-27 win over Tampa Bay.

Can Callaway and Smith step up and become top-flight, go-to receivers?

No-name guys have done it before for the Saints. Marques Colston was a 7th round pick, after all. Lance Moore and Willie Snead were free agents they picked up off the street. All three were highly productive. Smith was a 3rd round pick, though he’s been slow-developing.

They’ve also got Ty Montgomery and Kevin White, a pair of veteran receivers who are hanging on to their careers with the Saints. Montgomery is more of a Swiss army knife; he can play running back and receiver and he helps on special teams, but he doesn’t give you a lot of speed and he’s really a 4th receiver at this stage of his career. White is a deep threat and a former high 1st round draft pick, but his problem is that he simply can’t catch. If that could somehow change, then yeah – he’s got size and speed, and in college at West Virginia he looked for all the world like a future Hall of Famer.

There are some free agents floating around, though to sign a DeSean Jackson, John Brown, Alshon Jeffrey or Golden Tate might involve getting creative with contracts to fit the salary cap. That’s where the Saints will need to be at present.

But given the situation of Winston being out and having to choose between Taysom Hill and Tracy Seimien at quarterback the rest of the way (with rookie Ian Book now in the wings), the temptation might be to just let things ride as they are this year. The Saints’ defense is more or less a finished product at this point. Now that the team has its full complement of players on defense this might be the best unit they’ve had, and it might very well win games on its own with just a little help from special teams and a running game Hill’s return should help.

It’s a bit of a shame, though, because we never did quite get a chance to see what Winston could do with a Thomas-led receiving corps. He was hamstrung from the beginning without much in the way of weapons to work with, and nonetheless was far more efficient and careful with the football than anyone expected through the first seven games. Now that he’s out, Sean Payton’s once dazzling offense is going to look more like Bum Phillips’ three-yards-and-a-cloud-of-astroturf attack.

Unless something unforeseen happens, the Saints will be scraping away at the rest of the schedule trying to pull off a succession of 13-10 victories. It’s a bit different brand of ball that we’re used to.

Interested in more news from Louisiana? We've got you covered! See More Louisiana News
Previous Article LA Hates Joe Biden So Much, It Might Just Change Our State Politics
Next Article SADOW: Media Aided, Edwards Doubles Down On Alarmism