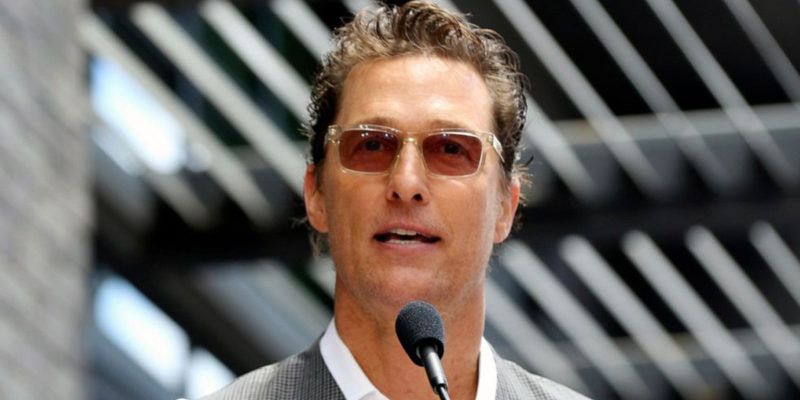 We could see this coming a Texas mile away, but for some reason everybody really thought that McConaughey, a famous actor who grew up in Texas and returns to stand around on the sidelines while the Longhorns lose in football as often as not, was going to take the political plunge.

This happens all the time, these celebrities weighing an electoral run. They almost never do run, and when they do they’re generally colossal failures. In semi-recent years the only really successful one was Al Franken, who stole an election for the Senate in Minnesota and proceeded to humiliate himself and his state for a few years before a sexual harassment scandal drove him from office. You never see anything of Franken anymore, and for good reason – he’s better left unseen and unheard from.

Most of the celebrity political runs end up like the disastrous gubernatorial campaign of “Sex and the City” actress Cynthia Nixon, who was summarily blown out when she ran against Andrew Cuomo in the New York primary. Nixon is a radical leftist with noxious views on practically every topic, and even New York Democrats laughed in her face at the idea of being led by her.

McConaughey isn’t an utter jackass the way Franken or Nixon are. But he’s not Ronald Reagan, either.

The thing to understand about Reagan is that he was very far afield from an acting career by the time he’d become a politician. Reagan had been president of the Screen Actors’ Guild at a time when that was a consequential job – at that time SAG was actually fighting against communism rather than apologizing for it or demanding it of its members. As such, Reagan was very familiar with the ideological debate and what it takes to win a political scuffle. Reagan also had a job with General Electric as a spokesman, at a time when GE was an unapologetically American manufacturer rather than a soulless multinational rent-seeker. As part of that job with GE, the Gipper went around the country making speeches about America and the goodness of our capitalist system – and during that time he read extensively, forming a coherent political ideology.

Reagan knew what he was doing when he ran for governor of California. He had prepared for that job just like he prepared for an acting role. Reagan’s preparation was extensive and took many years.

McConaughey’s preparation has consisted of a few months of “yeah, maybe I’ll do that.”

But to his credit, he recognizes getting into the Texas gubernatorial race is a waste of time and money.

Actor Matthew McConaughey announced Sunday that a future in political leadership is not in the cards — right now.

After acknowledging that he had taken time exploring politics and considered a run for the governor of Texas, McConaughey said in a video message on Twitter that he’s decided to focus his efforts in the private sector.

“As a simple kid born in the little town of Uvalde, Texas, it never occurred to me that I would one day be considered for political leadership. It is a humbling and inspiring path to ponder. It is also a path that I’m choosing not to take at this moment,” he said.
The decision brings an end to months of speculation about McConaughey’s political ambitions in Texas after he publicly signaled interest in launching a gubernatorial campaign. The “Dallas Buyers Club” actor, who grew up in Texas, would’ve been something of a political wild card in what is shaping up to be one of the most high-profile contests in 2022.

“I’m measuring it,” he had said of running for office on a podcast in September. “Look, it’s going to be in some capacity. … I just — I’m more of a folksy and philosopher poet statesman than I am a, per se, definitive politician.”

He continued, “So I go, well, that’s a reason not to, but then I go, no, that’s exactly why you should, because politics needs redefinition, but I’m measuring, you know, what is my category? What’s my embassy?”

Another Democrat who’s made it quite far in life pretending to be someone else, that being Beto O’Rourke, has already jumped in to fill the role of runner-up to Greg Abbott. There is no lane for McConaughey to run in, and when he casts himself as a centrist Democrat, even in Texas, he makes himself impossible.

Either he realized that himself, or somebody advised him correctly.

But it’s a good thing. Because frankly, McConaughey is a likable guy who can do a lot of good bringing people together through his art or, as Reagan did, through his voice. And by doing that, rather than entering the cess-pit which is electoral politics, he doesn’t have to commit to things his party has stupidly anchored itself to.

Here’s hoping he continues the discussion, and remains his own man. People of goodwill can reason together, but it’s much easier to do outside of the pressure and idiocy of the power-grasping Thunderdome that is the political arena. Maybe in time, when a new American consensus is forged, McConaughey could be a viable option.

Interested in more news from Texas? We've got you covered! See More Texas News
Previous Article SADOW: Edwards Map Hedge Seeks To Avoid Wasted Power
Next Article GURVICH: The Democrat Party Is A Danger To Itself And Others