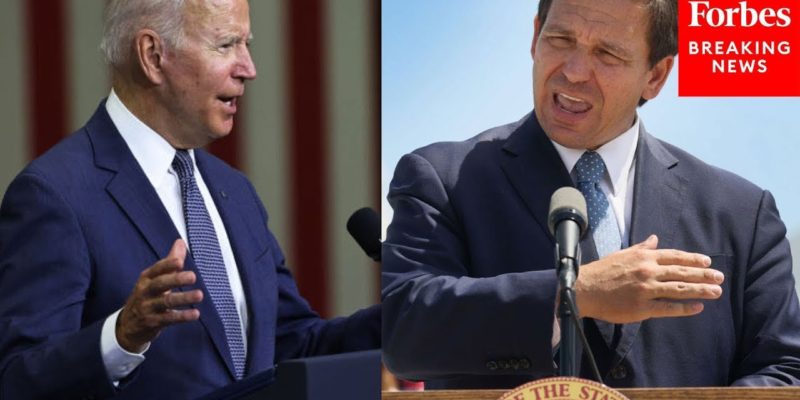 I’ll just come out and say it: I’m still a Donald Trump fan, but I don’t want him to run for president in 2024. I want somebody else who lives in Florida to do that job.

The thing is, Trump will be 78 years old in 2024. Joe Biden is 78 now. Yes, Trump is a whole lot more vibrant and able than Biden, but when you get old you can lose steam pretty quickly. And we should face the fact that the damage Biden and the communist cabal who handle him are doing now will necessitate a colossal infusion not just of energy but of clear-headed expertise in order to beat it back.

The 2022 midterm elections will likely put a big halt to Team Biden making things exponentially worse. By this time next year we’ll be begging for some gridlock, and a 260-seat GOP majority in the House and a 54- or 55-seat majority in the Senate will give us exactly that. Perhaps we’ll get lucky enough that the leadership of that majority will be willing to use the federal budget as a broadsword against Biden’s overreach; but honestly, a more reasonable hope is that Republicans on Capitol Hill would be able to at least hold the line until this administration can be turned out in disgrace.

Right now Trump beats Biden if the 2024 election were today. There is no reason to believe Biden, who is clearly an addled, doddering old man barely capable of controlling his bowels in public, much less his mouth, is going to recover from the nightmarish approval ratings poll after poll shows him to have.

And Trump would repair some of the damage Team Biden has already done. But to fully restore and revive America you’re going to need somebody who can be as transformative as Barack Obama was for eight years.

That takes brains, and it takes balls made of depleted uranium, if not the radioactive kind.

Trump has the latter, though his performance with respect to COVID could frankly have been better.

DeSantis called Florida’s legislature into special session to pass a bill directly nullifying Biden’s vaccine mandate orders, and DeSantis is now talking about eliminating OSHA, the federal agency which regulates workplace conditions, and replacing its role in Florida with a state agency. That’s the kind of thinking nobody is willing to do, but it’s definitely possible. States submit to OSHA because the federal government pays them to, just like Medicaid. Throw away the funding OSHA carries with it and go your own way, and OSHA doesn’t apply in Florida anymore.

Nobody does that, but that doesn’t mean it can’t be done. And when OSHA purports to fine companies $14,000 for having an employee who isn’t vaccinated on their payroll, OSHA does enough harm to Florida’s economy that it’s reasonable to conclude Florida would be better off without OSHA.

Anyway, the legislature passed the anti-vaxx mandate bill, so DeSantis held a signing ceremony – in Brandon, Florida, of all places.

The thing about DeSantis is that he’s got a lot of fire to him, but he’s never out of control. National news organizations send idiot reporters down to ask him rude questions, and he eats them alive – but not in a nasty or vituperative way. He’ll calmly deconstruct the premise behind their questions and then steamroll them.

And while Trump was/is usually correct as to the problem which must be solved, DeSantis is Johnny-on-the-spot with a solution. For example, Trump knew from the very beginning that Hillary Clinton’s campaign was behind the smears and lies underlying the accusation he’d colluded with Russians to fix the 2016 election, and he railed and whined about it for two years as those smears and the Deep State’s pantomimes of an “investigation” of his supposed wrongdoing crippled his presidency. But did he do something about it?

The play would have been to make sure you had an Attorney General willing to prosecute Hillary Clinton and all of the Deep State actors who knowingly created the falsehoods and injected them into the bloodstream. John Durham’s investigation has begun to smoke out some of the worst actors who created the Trump-Russia hoax and abused their power to make it a $40 million Robert Mueller snipe hunt, but that’s four years too late.

Trump hired Jeff Sessions as his AG, then allowed Sessions to recuse himself. That was a disaster. Sessions should never have been tapped for that job. It needed to be a tiger like Victoria Toensing or Joe DiGenova, who would have torn into the Obama administration and put all of the James Clappers, John Brennans, Samantha Powers and Andrew McCabes under investigation and indictment, bankrupted them with legal fees and forced them into submission and betrayal of their confederates. Instead, Trump, as president, allowed them to do it to his people like Mike Flynn, Paul Manafort and Roger Stone.

I chalk that up to somebody who had never held political office before and simply had no idea just how corrupt and villainous the political world really is. What they did to him defied his imagination. I don’t blame him for it, but then he allowed himself to get rolled by the Anthony Faucis and Deborah Birxes of the world with COVID, and that’s what opened the door for Biden to win that election without even campaigning. Trump, for all his virtues, needed to smarten up.

Contrast that with DeSantis, who’s plenty smart already. He acts decisively in Florida and counters the Biden administration at every turn while clearly and loudly explaining what he’s doing and why. He saw Biden failing on COVID, so he set up monoclonal antibody infusion clinics all over the state. Then the Biden administration stepped in to limit the supply of monoclonal antibodies from the main provider, so DeSantis went out and short-circuited the feds by obtaining them from another company.

Ron DeSantis is yelling, loudly, that the ports of Miami, Tampa and Jacksonville are wide open and ready to handle whatever shipping California’s policy-dysfunctional logistics infrastructure can’t. DeSantis doesn’t engage in endless debate on things like Critical Race Theory in the schools; he gets a bill passed dictating to leftist school administrators that they will teach patriotic education or else, and he also moves to rapidly increase school choice in case their compliance is not sufficient. He tells lazy teachers and school administrators that if they try to deny kids classroom instruction he’ll withhold their money, and they submit.

He moves fast with solutions, and as he mentions in the video, he doesn’t just wring his hands and talk about how it’s somebody else’s fault. He aggressively fixes things in Florida. He’s smarter than them, he knows the system as well or better and he moves faster than they do.

DeSantis is the guy.

I’ve said that Trump, who, again, I like very much, is more of a John the Baptist figure but not actually the messiah. DeSantis is proving it. He’s Trump 2.0. He’s the revivalist we need.

Interested in more national news? We've got you covered! See More National News
Previous Article GARLINGTON: Don’t Go To War Over Belarus
Next Article BAYHAM: The Winners And Losers From The 2021 Louisiana Primary