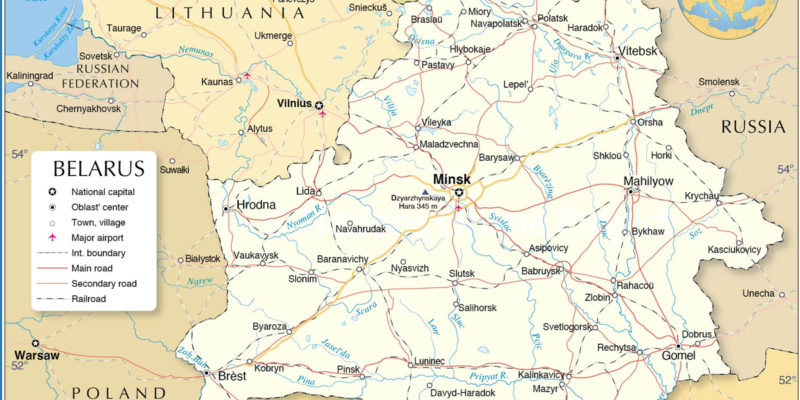 The Deep State in Washington City seems to have settled on its next target for regime change:  Alexander Lukashenko, the president of Belarus.  Casually listening to lefty NPR today yielded two in-depth reports on the supposed evils being perpetrated by Pres Lukashenko.  The right is also fueling the fire with reports of its own about the crisis at the border of Poland and Belarus.

We have seen this too many times in recent years not to understand what is happening.  When the news media of all political persuasions begins to coalesce around a bad guy, they, like St John the Baptist, are preparing the way – for a war.  Saddam Hussein in Iraq, Slobodan Milosevich in Serbia, Muammar Qaddafi in Libya, Bashar Assad in Syria, the technique is the same every time:  Vilify the target for weeks, and then bomb and/or invade.

The media handwringing over refugees is dishonest at best.  If these reporters were really concerned about them, they would be pressuring the US and EU to stop the wars in the Middle East and North Africa (MENA) that these superstates started and which have caused millions of people to seek shelter in Western Europe.  Instead, they either turn a blind eye, or keep up the pressure for more Western intervention in the MENA region.

The Washington Deep State’s goals in Belarus are likely related to what is going in Ethiopia and elsewhere in MENA:

The destruction of state structures in the Horn of Africa is the Pentagon’s objective after having destroyed state structures in the wider Middle East. The destruction of Sudan (divided in 2011 into Sudan proper and South Sudan) and Ethiopia (divided in 1993 into Ethiopia proper and Eritrea) has already taken place. Both countries are now in the midst of new civil wars that are likely to lead to new partitions.

Leading the way, the American diplomat Jeffrey D. Feltman first organised the war in Syria for ten years – i.e. the financing and arming of the jihadists – [1], before becoming President Joe Biden’s special envoy for the Horn of Africa. His speech, on November 1, 2021, before the Pentagon think tank, the U.S. Institute of Peace (equivalent to the National Endowment for Democracy -NED- [2] in the Secretariat of State), repeated the same rhetoric that was successively developed against Afghanistan, Iraq, Libya, Syria, Yemen and Lebanon.

Weak, divided countries are easier for a union of States with global, hegemonic pretensions to control, in whatever part of the world they are in.

But in the case of Belarus, the intentions go beyond this.  The destabilization of Russia is the real goal here.  The power-mad American elite detest any nation that dares to challenge American supremacy in global affairs.  Russia is one of those nations of late, along with China, so they must be brought back into subjection to Pres Obama’s Indispensable Nation somehow.

Surrounding enemies like Russia with nations run by American puppets is one way to do that (first the Ukraine in 2014; now an attempt in Belarus).  But if conservatives in the States really want to make a clean break with the phony conservatism of the Bushes, Boehners, Cheneys, and others of previous years, then they need to reject this new push to meddle in the internal affairs of a country thousands of miles away that has little bearing on our day-to-day lives.  Europe can and should handle the Poland-Belarus situation on its own, without US interference.

The South, for her part, should follow the sound advice of her mature statesmen.  Here is some of what one of them said during the Vietnam War:

What I do question is the ability of the United States, or France or any other Western nation, to go into a small, alien, undeveloped Asian nation and create stability where there is chaos, the will to fight where there is defeatism, democracy racy where there is no tradition of it and honest government where corruption is almost a way of life. Our handicap is well expressed in the pungent Chinese proverb: “In shallow waters dragons become the sport of shrimps.”

The cause of our difficulties in southeast Asia is not a deficiency of power but an excess of the wrong kind of power which results in a feeling of impotence when it fails to achieve its desired ends. We are still acting like boy scouts dragging reluctant old ladies across the streets they do not want to cross. We are trying to remake Vietnamese society, a task which certainly cannot be accomplished by force and which probably cannot be accomplished by any means available to outsiders. The objective may be desirable, but it is not feasible….

If America has a service to perform in the world and I believe it has it is in large part the service of its own example. In our excessive involvement in the affairs of other countries, we are not only living off our assets and denying our own people the proper enjoyment of their resources; we are also denying the world the example of a free society enjoying its freedom to the fullest. This is regrettable indeed for a nation that aspires to teach democracy to other nations, because, as Burke said: “Example is the school of mankind, and they will learn at no other.” . . .

If we can bring ourselves so to act, we will have overcome the dangers of the arrogance of power. It will involve, no doubt, the loss of certain glories, but that seems a price worth paying for the probable rewards, which are the happiness of America and the peace of the world.

Those words were written by Sen Fulbright of Arkansas, who questionable conservatives like Hannity and Levin love to smear as a racist, while they laughably uphold war criminals like General Grant as great heroes.  It is more likely that he was simply a man of his times, in which segregation was a part of life.  And thoughtful men and women are never wont to quickly and carelessly overturn longstanding customs because doing so usually brings about chaos.

We bring that up because certain people who want the global American Empire to continue into perpetuity will use the ‘racist’ tag to discredit Sen Fulbright and other Southern statesmen who advocate for restraint in foreign policy.  Well, we would rather have Cousin Fulbright from Dixieland, with his handful of understandable moral imperfections, to lead us prudently internationally than the unmerciful, self-perfected, self-righteous Yankee who is bent on turning every nation, either through economic sanctions or bombs dropped from flying Stratofortresses, that dares to stand up for its own interests into a famine-ridden wasteland.

The States can be of most use in the Belarus-Poland standoff by defusing tensions, rather than inflaming them – and then riding to the rescue in an armed convoy – to sickeningly aggrandize the US’s geopolitical standing.