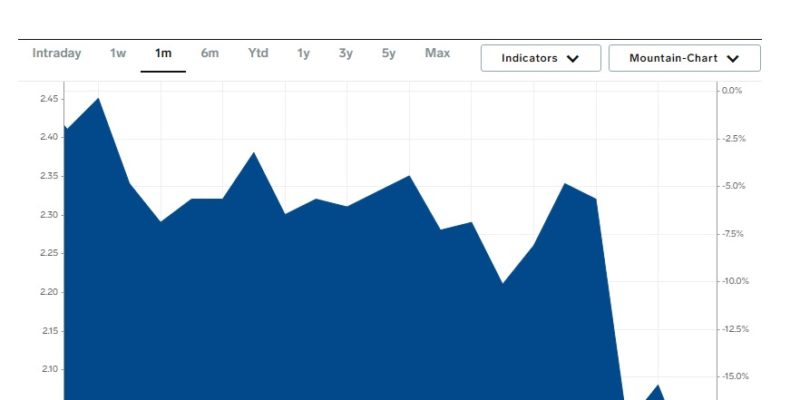 On Friday, December 3, the November jobs report is expected to be strong. But if you listen closely there are a few pessimists out there still hung up on viruses.

You can count me in as a pessimist, though not due to the virus. I’m more believing that the November jobs report will not meet, much less exceed, expectations, but I have my reasons. The so-called Omicron variant is too early to contribute to an economic slowdown and what we know is that it is a much weaker variant than the original COVID-19. Most people have been vaccinated and those who haven’t have chosen to move on with their lives.

Either way, the people, and the economy, have decided to move forward. President Biden and his followers, stuck in his glory day of 2020, can’t seem to let go the one issue he was supposed to fix and apparently didn’t.

I’m pessimistic for other reasons. I do expect positive numbers, and if the report meets expectations, I be looking for the update to the November jobs report which will likely be gloomy.  We probably haven’t seen the last of a push for the BBB infrastructure plan, or as I like to call it, Biden’s Biggest Blunder.

RBOB price will give you a good indication of what you should be paying around. The equation is pretty simple.

Whatever the RBOB gas price is, add 10 cents for markup, 18.3 cents for Federal Tax, and then add your state tax. The taxes in Louisiana-20.93 cents, in Texas-20 cents, in Mississippi 18.4 cents, and for a list of all other states click here.

So in Louisiana, if the RBOB gas price is $2.50, you will see prices at the pump around $3.00, maybe a little higher. If RBOB prices are rising fast, you can bet the price at pump necessarily reflects the loss in price increase.

Politics seems to oversimplify where it’s a bit more complicated, and over-complicate where it’s a lot more simple. However, if you want to understand the price of oil, you have to do a little research. There are some myths out there, electrical vehicles are the solution, and that we were energy independent. The truth is, we are NOT going to get off oil any time soon. Even if every car went completely electric, we’d still be using the same amount of barrels of oil, gasoline would be super cheap, but all other aspects of oil would increase to make up for the loss. It’s part of the cracking process. The more you understand that cracking process, the more you realize all the other ways were are dependent on oil and we’re not going to get off of it any time soon. Try explaining it to the average person and their mind is made up. When you try to tell the President about the cracking process, Pendejoe writes it off and tells you Hunter went to rehab.

As for being “energy independent,” that’s not exactly an accurate statement since oil goes to the world market. What is a much more accurate statement is that we were contributing our “fair share” to the world by drilling for oil. Now our attitude is, “we’re going to sit on our resources and tell other countries to work harder, produce more oil.” But that is the liberal mindset isn’t it? You work harder, I enjoy more. They think they are contributing by telling other people what to do.

But there is something at least worth noticing, and possibly raising alarming concerns, is that in mid-October, RBOB gas prices were at $2.52 and that dropped to around $2.00 on November 30. Certainly people will give Pendejoe credit for opening of our strategic reserves and bringing the price of gas down, but the decrease was happening before he made his announcement.

While most of us welcome the lower gas price, it’s ultimately supply and demand that dictate the price of oil and OPEC, Russia, the President can only do so much. When the supply becomes too much, the price must come down. This is a surplus issue. It’s not necessarily a bad thing, this is why the United States should contribute their fair share of oil to the world- to keep the price down.

The reason this is concerning is this could very well be an indication that people’s budget woes are coming to a breaking point, meaning, they are driving less. Jobs are being filled, but most of those jobs existed prior to the pandemic and are being filled. How many of those jobs are newly created from an expanding economy? Black Friday sales increased from last year but were still down from pre-pandemic, while Cyber-Monday sales fell from last year. It marked the first time Cyber Monday saw a year over year decrease.

In latter half of 2008, RBOB gas fell from its high of $3.41 in June down to $0.98 in December with the steepest decline beginning in September. Within a month, the nation was in an economic crisis.

While I’m not ready to say that we are definitely at that breaking point, where too much money is coming out of people’s budgets for too long of a period of time, RBOB prices are something we should be mindful of as much as we pay attention to WTI and Brent Crude. If the prices are falling despite producing less, this is an indication that the economy is receding.

Let’s keep our fingers crossed that this is due to Pendejoe’s opening of the strategic reserve despite the fact that prices were decreasing before that announcement was made. Unfortunately I fear that Pendejoe’s response is too little, too late, and he’ll become even more draconian.

Interested in more national news? We've got you covered! See More National News
Previous Article HOLTON: Terrorism By Any Other Name Is Still Terrorism
Next Article SADOW: There Are Downsides To Brian Kelly’s Massive LSU Contract