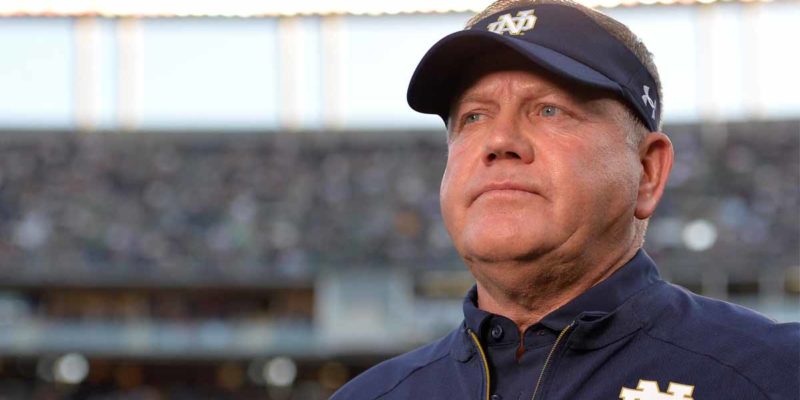 The drama that surrounded the LSU head football coach search underscores its vigorous commitment to athletic success that has created both academic and ethical problems that continue to reverberate.

Its hiring of Notre Dame’s Brian Kelly sent an aftershock through the college football world. Kelly’s move, who essentially made three national championship playoff rounds in his decade-plus there, followed that of another name to which LSU was connected, Oklahoma’s Lincoln Riley, whose teams made three such appearances in the past five years and who has the winningest record ever for a coach through his first five years as head man. Only a day earlier, Riley had decamped the Sooners for Southern California.

Attention-grabbing was two typically rare events in 24 hours: a coach leaving a “destination school.” Two qualities distinguish this handful of schools from the rest of the college football world: historically, these (1) have coaches with long employment runs because they have over the decades few seasons where they don’t compete for conference and national championships late into a season, and so (2) these hardly ever need to fire the boss. Further, destination school coaches leave only by poaching from another destination school (as in the case of Riley), a move to the National Football League, or they retire.

While impolite by those involved to admit, clearly money had much to do with both Riley’s and Kelly’s changes of venue. As a private school USC has no public records imperative about its (extensive) athletic department resources or coaches’ salaries, but what has trickled out about Riley’s deal shows he got at least a 150 percent pay raise and a Steve Austin-number mansion (and use of a private jet to boot), and if it’s at the lower end of an estimated 6-10 year range, he’s right up there with the highest-paid NFL coach, Bill Belicheck. Kelly also will score big, if not as massively. His salary almost will double (from what is known about his NDU pay, which also is a private institution).

And in landing Kelly in unprecedented fashion, LSU is certainly acting like a destination school. But it’s telling that it ended up with someone like Kelly, as opposed to someone like Riley, who in the short run – because of his brief tenure – has outperformed Kelly.

Keep in mind that Riley is 22 years younger than Kelly. He can stay at USC for 20 years and truly make it his destination, unless the NFL tempts him. And while Kelly has a ten-year deal, very few head coaches stay on the sideline until they are 70, Nick Saban at Alabama a notable exception, so it’s more of an easing into retirement for him than destination job.

Reports are that Riley was satisfied with his sinecure at and direction taken by OU (contrary to the lazy pop psychology employed by some sportswriters who thought he moved on to avoid coaching in the Southeastern Conference, where OU will affiliate within the next four years), and both sides tried to work out a deal for him to stay. By contrast, Kelly appeared ready to retire at a place other than NDU and all season looked set to wave goodbye even as the Irish stayed in the thick of the national championship race.

Which tells us that younger, accomplished coaches wanted little to do with LSU, given the toxic mess stemming from its athletic department, chiefly because of the football program. Documented unacceptable and illegal behavior by student-athletes mainly by way of sexual harassment and the university’s seeming attempt, bolstered by coaches like the let-go Ed Orgeron and his predecessors, to benignly permit if not cover this up in the name of winning has triggered a slew of lawsuits, making this perhaps not the most welcoming environment for a new coach.

No coach with a long career ahead of him would want to step into this, spending his first few years dealing with the fallout, when other offers, especially to a traditional destination school, lay in wait that would make his life so much easier and not imperil his career trajectory. Chances are Riley was contacted early in the process and for these reasons immediately made his disinterest known, or even let his agent, former NFL star Trace Armstrong who has transitioned into being a superstar agent for college coaches, use it as a smokescreen to cover his dealing with USC while he allowed another of his clients, Kelly, to burrow his way in.

For a more senior head man, already with a substantial legacy and most of his career behind him, could put up with it for a few years if given a high payoff. Such an experienced coach in fact could prove valuable in cleaning up the situation – shying away from recruits of questionable character even if they were fantastic on the field, demanding proper comportment from the team, and keeping his hands off the interns.

Unfortunately, Kelly himself brings some ethical baggage. Under his tenure, Notre Dame twice has been hit with National Collegiate Athletic Association sanctions, one stripping away wins from two of his seasons including a national championship game run, and the other just handed down this year faulted Kelly for a minor recruiting violation. While this pales in comparison to the charges reaching their investigative conclusion regarding the LSU men’s basketball program, where head coach Will Wade was caught on tape sounding for all the world like making a cash offer to get players on the team, it isn’t the greatest signal to the outside world that LSU will straighten up and fly right.

Regrettably, the Kelly hire seems designed mainly to placate the unrealistically high expectations of a fan base that craves for the school to become a consistent conference championship and national championship competitor. It doesn’t discourage this excess fixation on winning that let people in of questionable character and then didn’t rein them in. By contrast, selection of a lower-profile but quality coach with a reputation for well-run programs – even if that meant someone without an exalted pedigree – would have served the school better.

LSU got into trouble because of its chase of destination school status and its larger obsession with athletic prowess in general. (It’s not alone in that respect and destination schools themselves sometimes end up the same in their quest to maintain their status, which isn’t guaranteed in perpetuity; see Nebraska Cornhuskers) This isn’t a product as much of elites as it is a fan base that infamously gives much more proportionally to athletics than academics compared to peer institutions, and has one of the lowest endowments of SEC schools and is abysmally low compared to schools nationally. Donors letting their dollars talk in putting athletics before academics explains much about the prevailing ethos of their beneficiary (although the academic side of things doesn’t do itself any favors in attracting donations when, for example partly as a result of the bad publicity from the suits, the school brings on board a woke chief executive.)

Possibly Kelly can further that agenda without the excesses, but it appears his hiring placed much greater emphasis on trying to win than specifically trying to implement above-board program management. That’s a mistake that hopefully won’t cause a rinse and repeat of the problems the school now navigates.