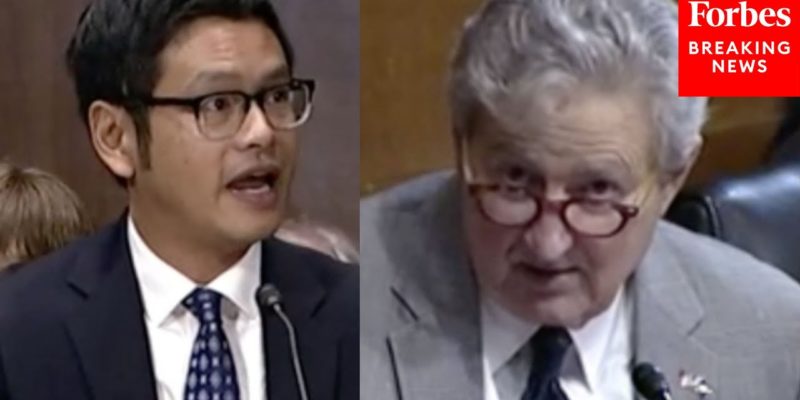 Dale Ho is up for a federal judgeship in the Southern District of New York, which as our well-informed readers know is the district which encompasses Manhattan. Ho is fairly characteristic of the typical Biden administration judicial nominee – namely, that he’s a partisan Democrat and a radical leftist with incredibly poor temperament to be a judge. Ho’s current job is as the director of the American Civil Liberties Union’s Voting Rights Project. In that position, he made news for fighting the Trump administration’s decision to include a citizenship question on the 2020 census. He also fought to include illegal aliens in census counts used for congressional apportionment.

There has been a parade of radical leftists through the Senate’s Judiciary Committee for months, and each time one of these people comes up for a judgeship either at the district or circuit court of appeals, they almost ubiquitously have left a long paper trail of obnoxious tweets, writings or other evidence that they’re hateful, disrespectful loons who really, really shouldn’t hold judicial power.

And Sen. John Kennedy has done a terrific job of smoking out how terrible these guys are during his questioning of them. He shows up to these hearings loaded with a record of statements, tweets and other pronouncements each nominee has made which prove them to be horrifically poor choices to serve as judges, and he makes them defend the indefensible.

It’s a true public service. Kennedy has done it dozens of times. He did it again yesterday, to Dale Ho.

What’s most notable about this is how quickly Kennedy shuts down Ho’s attempts to divert the conversation from his disqualifying remarks. Ho tries to steer things toward religion; Kennedy isn’t having it. Ho tries to convert the discussion of tweets he’s pushed out attacking Republicans as monsters into a debate about the coarseness of Twitter; Kennedy has no time for that – he asks him point blank whether he meant what he said.

And this isn’t a simple matter of “gotcha,” because this stuff is relevant. Dale Ho wants to be a federal judge. You don’t get to be a leftist activist and a federal judge at the same time, because you aren’t fulfilling your responsibility to be objective if that’s how you’re going to operate.

Ho’s defenders would claim, and perhaps there is some validity to it in a general sense, that his current job and the one he wants are different things, he’s smart enough to understand it, and if confirmed he’ll conform to those responsibilities.

Except we already know it rarely works like that. These radical leftists, once put on the bench, don’t follow their oaths. They use the law to play politics.

Kennedy can’t stop Ho’s confirmation. The Republicans are one vote short of being able to block him on the Senate floor, and Kennedy’s GOP colleagues are notably weak on standing together to stop the radical nominee parade in any event. Dale Ho is almost certainly going to be confirmed despite his clear lack of fitness for the job.

But at least America got to find out something about the radical leftist nominee who’s about to become a federal judge in New York City. And Kennedy deserves thanks for that.