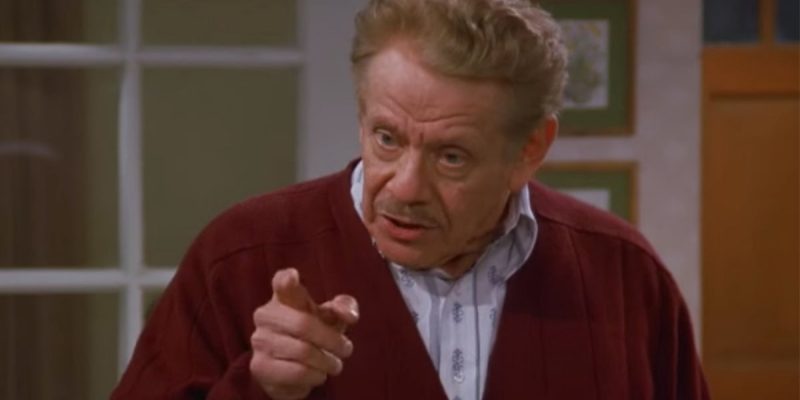 One should not extend happy nor merry Festivus greetings as the Seinfeldian seasonal commemoration observed every December 23rd is neither.

However, celebrating (or rather enduring) Festivus can potentially be healthy – assuming you do not strain a muscle or fracture anything during the traditional feats of strength.

And the airing of grievances can be very cathartic, especially if America’s 46th president, both in order and competence, has a deserved seat of honor during the Festivus meal, which costs a bit extra this year because of…you know, Biden.

If America was hoping to return to some degree of pre-Wuhan pandemic normalcy in 2021 they definitely chose the wrong curtain in the 2020 presidential election game show.

Surely what did tens of millions of voters think could possibly go wrong when they hard passed on a Trump Administration that had ushered in prosperity, security, peace, and American assertiveness regarding our interests though affixed with a bow and ribbon of emblazoned with mean tweets for what lurked behind a facade fronted by the mentally enfeebled mascot for Beltway transactional politics seconded by the Eva Peron of California?

In these past 11 months of the bumbling Biden maladministration more people have died of COVID-19 than under President Trump- who was caught off guard by the virus just like every other world leader- starting with Red China’s.  Yet to Trump’s credit, his administration’s Operation: Warp Speed actually produced tools to contain the effects of COVID in record time for such a large scale medicinal development.

In contrast Biden has used COVID as a means of not just pushing the envelope but shoving it down people’s veins through unprecedented federal mandates that overstep government authority over citizens, restricting their ability to not just hold a job but function in society.

Biden and his ilk are not concerned with public health but expanding the frontiers of the state.

You haven’t heard Biden saying much coherently or otherwise about pursuing the cause of a pandemic that has killed hundreds of thousands of our countrymen yet the president has made time to make noise about events that transpired before he was even born (considering the president’s advanced age that’s quite the time leap) to further greater national self-loathing and delegitimize America standing as a great country.

Though President Biden has no need to blow the dust off of history books to find an episode of American not so greatness when he’s proven to be able to create these on his own.

The world, especially our enemies who doubtlessly struggled to not choke on their popcorn, saw a fiasco of epic proportions play out in Afghanistan with a clumsy military withdrawal that looked every bit like a panicked flight not due to our servicemen or their equipment (now the Taliban’s) but because of the irrational directives issued by Washington to meet an arbitrary timetable.

Considering the two impeachment tableauxs hastily produced by Nancy Pelosi against Trump- the first based off a hoax that has not led to the incarceration of the enablers and the second being a farce that was in no way constitutional nor followed any sane train of logic- that Biden wasn’t brought up on charges for literally aiding the enemy (because that’s what the Taliban was, is, and always will be- not just to the United States but to modern civilization) through the abandonment of billions of dollars worth of vehicles, gear, and weapons is astounding.

Yet Biden nor his coterie of handlers and pliant yes-men/women/them/generals have faced any meaningful consequences beyond a CSPAN dressing down for a debacle on scale not seen since the hurried evacuation of the Saigon US Embassy.

So much for the return of the “grown ups” in Washington.

Down south, the election of Biden ushered in waves of illegal immigrants swarming north hoping to take advantage of a reversal of the Trump era tough border control policies.  Biden assigned the management of the immigration crisis to his vice-president who looked even less serious than AOC during her weeping fence clutch photo shoot.

Inflation is soaring due to Biden’s Carnival of Spending while gas prices have jumped up because of Biden’s war on America’s energy production sector, waged to the detriment to consumers and our national security merely to appease the high priests of the Green Agenda.

These eco-apostles, when not seeking to sacrifice cows because of methane emissions, are now touting the merits of wind-powered cargo ships.

Just think what this port-side of the political spectrum concept will have on the current supply chain backlogs.

Funny how the very people who decry Columbus want to return to the very means by which he colonized the then-New now-Woke World.

A segment of Biden voters, albeit somewhat grudgingly, seems to now be cognizant of the consequences of their Faustian bargain with their unrelenting left-leaning relatives on Facebook and their woke grandkids and have registered their disapproval in surveys, where Joe Biden’s standing resides at 43%.

And that’s with the media covering up for Brandon instead of blatantly going full resistance on him as they did with Trump.

My last grievance airing is aimed at the 43% still Ridin’ with Biden.

I’ve got a lot of problems with those who don’t seem to have any problem with the status quo.

Are you so stuck on being considered politically fashionable that you’re at peace with the debacle in Afghanistan, content with higher prices for everything because of federal virtue signaling, letting Xi off the hook (so much so that the WHO actually skipped the similarly spelled out Greek alphabet letter in designating the new COVID “Omicron” strain that’s rapidly spreading across the globe) for his regime’s culpability in the coronavirus spread if not development, and the mess at the southern border and its tangential effects on crime and dare I suggest the further spread of COVID-19?