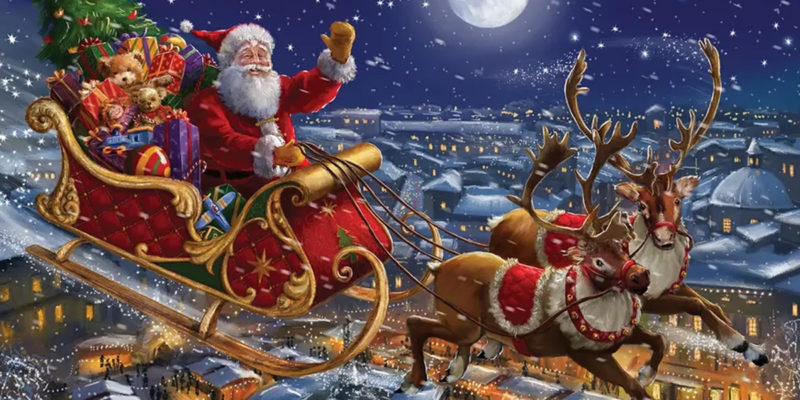 Merry Christmas Eve Eve, everybody! Is it bad we’re already out of egg nog?

Seeing U-Hauls in the Odinets’ future: Earlier this week, the Soros-funded disaster of a district attorney in New Orleans, Jason Williams, preened that he was going to go back through Michelle Odinet’s cases when she was a prosecutor in that office years ago as a young attorney and look for evidence of racism.

Judge Michelle Odinet's son Elijah "Eli" Odinet, who also used the n-word in the viral video, has been removed from the LSU track roster according to @theadvocatebr.https://t.co/aRlsyI01Mt https://t.co/YzsxjA6DIb

Eli was apparently the idiot who shared that video with the N-word being used onto the internet, though we’re not sure about that. LSU thinks he’s the voice using that word, which is why he’s out.

At some point all this starts to become overkill. We’d have said that point was passed a while ago. But the Cancel Mob doesn’t know any limits.

Remember how pissed off these people were when Ralph Northam got caught with those pictures in blackface? Right. Neither do we.

The whole Odinet family ought to wash their hands of Louisiana and head out for greener pastures. Start over someplace less stupid, where if you’re the victim of a crime they don’t try to ruin your life for saying a word that’s on every movie channel on TV.

Nobody wants to live here anymore: Jeff Sadow has a post here at The Hayride today talking about how John Bel Edwards is becoming near to irrelevant as he assumes lame-duck status. If that’s so, we can begin to assess his legacy, and there’s a singular word to do that with:

Louisiana is continuing an unfortunate trend of losing population to other states according to Census Bureau data.  Demographer Greg Rigamer says economic factors primarily played a role in the Bayou State ranking fifth in out-migration comparing 2020 to 2021 figures. “Arkansas grew, Texas, of course, grew significantly on this, Alabama, Georgia, Florida, Tennessee, you know states within our region are doing much better,” said Rigamer.

Louisiana’s percent of population decline for the year-long period was six-tenths of a percent, the sixth-highest in the nation.

He says that some have also left the state because of the continuing hit by catastrophic hurricanes.

Rigamer agrees that if the trend of Louisiana population loss continues as it has for several years, there runs the possibility of the state losing a seat in Congress. He tells LRN.com “It’s a little too early to say that but clearly if we continue to lose population that’s a probability.”

When the dust settles on Edwards’ time in office Louisiana will have lost more than 200,000 people on net, making him even more effective than Hurricane Katrina in growing the Louisiana diaspora.

The public wooing of Joe Manchin has begun: You’ve almost got to think there isn’t anything new about this, but the fact that it’s so public makes us wonder whether it’s about to actually happen. The Senate GOP is wrapping its arms around West Virginia Democrat Joe Manchin, and they’re not too secretive about it anymore.

McConnell noted Democrats’ hostile reaction to Manchin for his opposition to Build Back Better and said the West Virginia Democratic lawmaker would be better off caucusing with Senate Republicans.

“[H]e gave the American people the Christmas gift they needed,” McConnell said. “He killed this bill in its current form, which would have been really, really bad for America. Exactly the wrong kind of prescription for the rampant inflation that we’re suffering from already. As a result of what the administration advocated and the Democratic Congress passed earlier this year, we dumped $2 trillion on the American economy, which is a major factor in this huge upsurge in inflation — the biggest inflation increase in 40 years. So I admire what Joe Manchin did. I don’t expect him to give up. I think they’ll keep coming back to him.”

“I’ve suggested a good solution to his problem would be to come across the aisle and join us, where he’d be treated with respect,” he continued. “If you recall, the White House basically called him a liar Sunday. Treat him with respect and find himself in agreement with the party he was caucusing with most of the time.”

Tom Cotton told Fox News that the GOP would welcome Manchin with open arms. Meanwhile, Ted Cruz said at a conservative conference this week that he had recently pitched Manchin on switching parties, telling him that, “Look, one of the two parties actually likes you.”

We’re pretty sure they’ve been trying to flip Manchin since this time last year, when the possibility of losing both of those two seats in Georgia arose. So why the public push now?

Our guess is Manchin might finally be listening. With the screaming from the Hard Left and the threats from the White House, and the fact Joe Biden’s approval rating in West Virginia is all of 19 percent, it begins to seem pretty obvious that Manchin’s wasting his time staying in that party.

But he hasn’t flipped yet, so it’s fair to suggest he isn’t going to.

Should he do so, it would signal the end of the Biden legislative agenda and the retirements – two dozen already – of Democrat House members who can clearly see what’s about to happen next November will only mount.

The thing is, most of that will happen no matter what Manchin does. The question is whether he wants to go down with the ship. It isn’t like Manchin’s obstinance in refusing to support the stupid Build Back Boondoggle bill has woken up his party to the error of their ways, so the question then becomes what’s the point of sticking around and being hated?

They’re going to continue openly asking him to flip. The funny thing, though, is that a year from now if Manchin were to be a Republican he’d probably be viewed as a liability within the Senate GOP caucus rather than an asset.