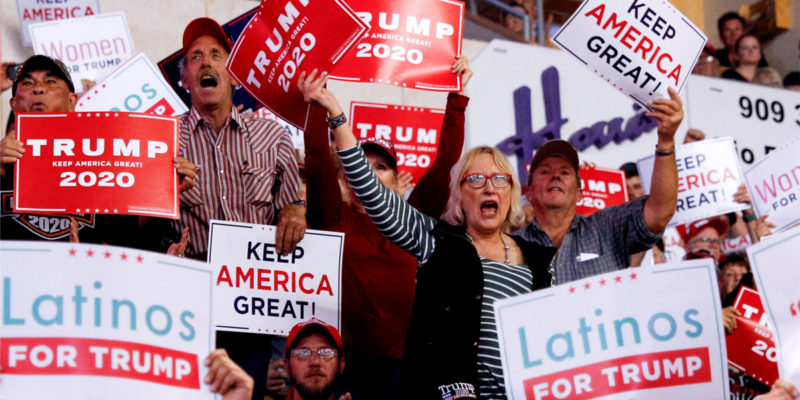 For as long as I can remember, being Latino meant that you voted Democrat. Of course, certain conditions dictated who voted Democrat and who voted Republican. For years, the GOP could rely on the Cuban vote, and later the Nicaraguan vote, and now the Venezuelan vote. Throughout the Southern belt, Latinos seem to favor the GOP, but throughout the rest of the nation, the Democrats fared well. All my life I’ve been around Latinos, from the Chicanos out west, to Latin American countries, and the immigrants that are here. I can’t speak for every Latino, but I can speak from a well-versed perspective. There’s a lot to unpack here so for brevity I’m going to link to definitions and use words as if you already understand. These are reasons why Latinos are leaving the Democrat party.

Latin X – This movement is popular in white progressive circles, but it declares that the person insisting on using it knows nothing of the Latin culture or of the Spanish language. X- pronounced “Eh Kees” is supposed to end all words that end with an A or an O, for what? To remove the gender of the word? Do they know how many words end with an A or an O?  Not every word has a gender, such as Edificio (Building) or Oficina (office). And what if I want a Taco? Am I supposed to say Dos Tac-equis? And do I complain when I get two tequilas and a Dos Equis? The language is fine and it doesn’t need some self-absorbed white progressive liberal who doesn’t even speak the language, much less never travelled to a Latin American country, to come change it. While this isn’t the biggest issue, it does indicate that Democrats don’t respect Latinos, enough that Latinos to say “Vete al Diablo”. In the end, it’s not a deal breaker, but it’s enough of a disconnect to cause problems. If some foreigner who doesn’t speak English suddenly demanded you change the English language, would you be warm to the idea?

Socialism – In many Latin American countries, there is two main ideologies- Democracy and Socialism. If you’re a capitalist, you voted Democrat, if you are Socialist, you voted Socialist. For many Latinos, voting Democrat was identifying as a capitalist and the Republican party was… well what was it? Socialist? But now the Democrats have openly declared themself as the Socialist Party and many Latinos who once voted for Democrats because they thought they were voting for capitalism now recognize the Democrat party as the home of Socialism. It cannot be reiterated enough, Latinos hate Socialism because they already lived through it, White progressives love Socialism because they never have.

Gender – Latinos not only are NOT ashamed of their genders, they’re proud of their gender. Women are proud women and love to be beautiful. Men are very macho and are very proud of that. The entire binary, 3,425 different genders is lost on the Latino community. Yes, there are gay people throughout Latin America, but this isn’t about being accepting of homosexuality, it’s about accepting the Latino culture. Women are women, and men are men. White Liberals can’t accept that and continue to force their ideology onto a culture, that again, they know little about.

Military – This may surprise you, but Latinos tend to be pro-military, especially American born Latinos. For a lot of Latinos, the military has been an opportunity for a better way of life and it accomplishes that end. Many Latinos who did not have American citizenship have joined the armed forces, served, and became a U.S. Citizen. This doesn’t mean that Latinos who served support every war, but there’s a respect for the military throughout the Latin American community.

Work Ethic – Latinos aren’t interested in staying home, they are interested in going out and working. What most Latinos want in America is the opportunity, they want to work hard and earn what they’ve got. They want to look at the treasures that fill the house and say, I worked for that, I accomplished that. It’s a pride thing. It’s a huge mistake for Democrats to look down at Latinos as if our daily goal is to watch Novelas all day waiting on a hand-out. The extended lock-downs by the Democrat officials is keeping many Latinos from living their lives and achieving their dreams.

American History Hate – Left wing progressives love to hate on Americans, specifically White males, because of American history. Wait until they open up to the history of Latin America. Yes, slavery existed there as well, in the Carribean Islands, and the Atlantic coast down to Brazil. Slavery ended in Brazil 2 decades after the end of slavery in the United States. And do they not know of the Incas, Aztecs, and Mayans? And while Latinos are proud of their Native roots, this does not mean they approve of the human sacrifices done in the past. Are we supposed to judge Latin America on the same criteria that we judge America today? Or is that just coming later?

Cancel Culture – Latinos love to laugh and be happy. Speedy Gonzales is a hero, and Fluffy is one of the all-time great Latino comedians, possibly the GOAT. Yet, white liberals tried to cancel Fluffy playing Speedy Gonzales. I often joke white progressives want to abolish tortillas because they are too white, and while it’s an exaggeration, going after Fluffy and Speedy is pretty close to abolishing tortillas for being too white. And why is it that privileged white progressives go after everything that honors minorities?

Border Security – Most Latinos probably wish we could go back to using a driver’s license to cross the border, but unfortunately 9-11-01 changed that. We are sympathetic to people crossing the border, but we also understand the rule of law. The biggest issue we have with border security is the idea that it’s targeting Latinos. If the issue is about Latinos, then Latinos will get defensive. If it’s strictly about border security, Latinos, especially those closest to the border, understand. They are well aware of the people who go missing and the decapitated bodies that people on the other side of the border often wake up to. Under Trump, the race of illegal immigrants was an issue when it shouldn’t have been. Under Biden, the lives and livelihood of Latinos has become an issue that should never have been. I prefer living to dying.

Democrats Don’t Got Heart – Got heart and having heart are two different things. Having heart is about compassion, Got heart is about courage and trustworthiness. Joe Biden often talks tough, but tough talkers usually can’t fight and are unreliable. People who got heart can tell the difference between a smack talker and somebody who will back it up. Take a look at the felines called Antifa, they talk big and bad especially when grouped, but they would never step up and go toe-to-toe. Who is courageous in Pendejoe’s administration? Everything the Democrats stand for is fear based and fear just isn’t the Latino way.

With the exception of religious beliefs or Socialism, most individual reasons won’t likely cause Latinos to leave the Democrat party, but each of these reasons give pause to ongoing support of progressives. Add these reasons together and you suddenly build a case against the Democrats and see why more than 50% of Latinos are no longer supporting Biden. There are also many other reasons that could have been on this list. Business is business in our community. The only color that matters in business is the color of money. We don’t care about your race, your gender, your sexuality, we care about your ability to do the job and the transaction of money.  Latinos are multi-racial and while most are brown skin, there are plenty of black and white Latinos. We’re very accepting of people, but we expect people to be accepting of us. Families matter, it’s important to us, and progressives want to do away with traditional families? The list is growing and the Democrats are finding themselves with Latinos who are coconuts or worshippers of Karl Marx. I don’t see the Democrats recovering from this any time soon.