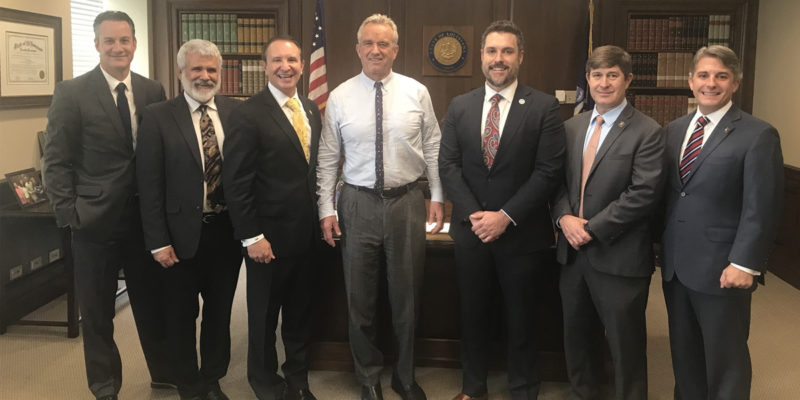 We had two stories Monday on the Louisiana House Health and Welfare Committee hearing and vote to reject the school vaccine mandate Gov. John Bel Edwards is attempting to impose at the beginning of the year, and yesterday I had an American Spectator column on the subject which generated a decent bit of buzz.

So going back to the well on that subject might be gratuitous, but we wanted to pass along something of value. Dr. Robert Malone is an internationally recognized physician and scientist who helped to invent the technology of mRNA vaccines, but he’s become a dissident as to their use with respect to COVID. The legacy media and virus establishment has been actively at work attempting to discredit him as a crank, though to date we haven’t seen much substance to those attempts. Malone’s points are sound.

And he was in Baton Rouge on Monday for the legislative hearing. He blogged about it, which we wanted to pass along.

Over the last three days I took an interesting trip down to Baton Rouge Louisiana with the Children’s Health Defense team on short notice to help Health Freedom Louisiana, the physician and nurses’ advocacy group Louisiana for Medical Freedom, Representative Kathy Edmonston, and Attorney General Jeff Landry by supporting testimony opposing the Louisiana Department of Health (“LDH”- backed by Governor John Bel Edwards) move to mandate the unlicensed and still experimental Pfizer vaccine be taken by Louisiana school children.  General belief that I heard from the locals is that this is an attempt by Governor Edwards to curry favor with the Biden administration as he seeks a federal appointment as an exit strategy from the government and great State of Louisiana.

This is an even more radical position than that which has been advanced in the State of California by Governor Gavin Newsom, which state is intending to mandate the Pfizer vaccine be taken by all California school children when and if it becomes licensed. The leading organization opposing that California mandate is The Unity Project (www.uniprojectonline.com), for which I serve as Chief Medical and Regulatory Officer.

A televised hearing was held before the entire Louisiana House Health and Welfare Committee in a hearing room at the statehouse which was packed with residents opposing the mandate. Proposed was a resolution opposing an edict by unelected LDH leadership which would currently cover students 16 and older but could expand as the vaccines obtain EUA recommendation from FDA and CDC for children down to age 5. Opposing testimony was provided from a wide range of elected officials, medical care providers (including physicians and nurses) and parents – including many mothers seeking to protect their children. From what I saw, there are a lot of angry Louisiana mothers as well as physicians and nurses that are absolutely not OK with a government mandate that their children receive an experimental vaccine that is mismatched to currently circulating viral variants, does not prevent infection and spread of the virus, and is associated with significant safety risks to their children including myocarditis and even potentially death.  The governor’s attempts to interject state government bureaucrats and DC politics into decisions that should reside within the family are not going down well with these groups.

The Children’s Health Defense team worked hard to summarize and present a carefully researched and focused presentation based on both peer-reviewed data as well as primary data previously presented to the FDA by Pfizer. The presentation including a series of posters (appended below) presented by CHD Chairman of the Board lawyer Robert F. Kennedy Jr., who testified at the request of Attorney General Jeff Landry.  General Landry provided a comprehensive summary of the statutory nuances of the proposed illegal mandate, and then yielded the remainder of his allotted time to Mr. Kennedy.  Many of those reading this article will be familiar with the meticulously documented and footnoted opus recently published by Bobby entitled “The Real Anthony Fauci: Bill Gates, Big Pharma, and the Global War on Democracy and Public Health”.  Mr. Kennedy has certainly demonstrated a detailed and nuanced understanding of the subject matter.

The general outcome was never in doubt, but the bipartisan nature of the final vote by the Louisiana House Health Committee was unexpected, with a bipartisan 13-2 vote to reject the proposed mandate which included three Democrats and an Independent, who joined all nine Republicans in voting against the recommendation. Democratic Reps. Robby Carter of Amite and Dustin Miller of Opelousas were the only no votes.

Malone then focused on the aftermath of the vote…

Predictably, the legacy media covered the rout of Governor Edwards’ attempt at a bureaucratic end run for mandating that the children of Louisiana be subjected to an unlicensed, experimental medical product by misrepresenting the testimony provided, gaslighting and attempting to delegitimize those providing testimony while regurgitating the vaccine mis- and disinformation provided by the Governor’s representative Louisiana Public Health Officer Dr. Joe Kanter, who believes that COVID-19 represents a significant health threat to children, denies that the vaccines are experimental, and rejects the idea that an unlicensed vaccine shouldn’t be added to the immunization schedule just because it doesn’t keep someone from getting infected or spreading the virus to others.  Unfortunately, none of these opinions are consistent with an objective fact-based assessment or past precedent, and Dr. Kanter did not provide any actual data to support these opinions- other than that no vaccine-associated deaths have been reported to his office via the unpublicized telephone number provided by his office to report any such events (which assertion was then posted to social media by the Governor himself as shown below).

But even this assertion is readily refuted by reviewing the many post-vaccination death reports listed in the CDC VAERS system as having occurred in Louisiana.  Biasing public health reporting of vaccine adverse events may help support the dominant narrative and the governor’s political agenda, but it does not help enable sound public health policy decision making, and is no substitute for solid, peer-reviewed study data.

Rather than addressing the data and meticulously referenced information provided by Lawyer Kennedy and the CHD team, the Associated Press merely commented that Attorney General Landry “appeared with Robert F. Kennedy, Jr., who has promoted debunked claims about the vaccine.” Local rag Lafayette Daily Advertiser reporter Greg Hilburn, who also reports on Louisiana politics for USA Today, referred to Mr. Kennedy as “an adamant COVID-19 vaccine critic who has been banned from social media sites because of spreading what the platforms deemed as immunization misinformation” rather than actually reporting on the substance of what was presented.

Readers will recognize a typical pattern of derisive legacy media coverage of data and opinion which is not consistent with the approved narrative that the Pfizer COVID-19 vaccine is safe and effective in children, including the notable absence of media coverage of the recent peer-reviewed publication from Hong Kong documenting that 1 in 2,680 young men develop clinically significant acute myocarditis/pericarditis following Comirnaty vaccination.

Despite the overwhelming rejection of his bureaucratic strategy by the elected legislative representatives of the people, the Governor intends to overrule the rejection and add the shot to the immunization schedule starting next school year.

Perhaps mindful of the famous Battle of New Orleans, the intrepid health freedom warriors fighting the Battle of Baton Rouge seem to be metaphorically keeping their powder dry and waiting until they can see the whites of the eyes of their opponents, but as has happened with the federal mandates, Louisiana legal guns are ready to respond to the Governor and may put a crimp in his designs on a soft landing in Washington DC after he leaves his current position.  In my experience, one should never underestimate southern state lawyers just because they may come across as folksy.

Malone’s welcome in Louisiana anytime. We can use his independent thinking down here – there isn’t enough of it at the state capitol, for certain.