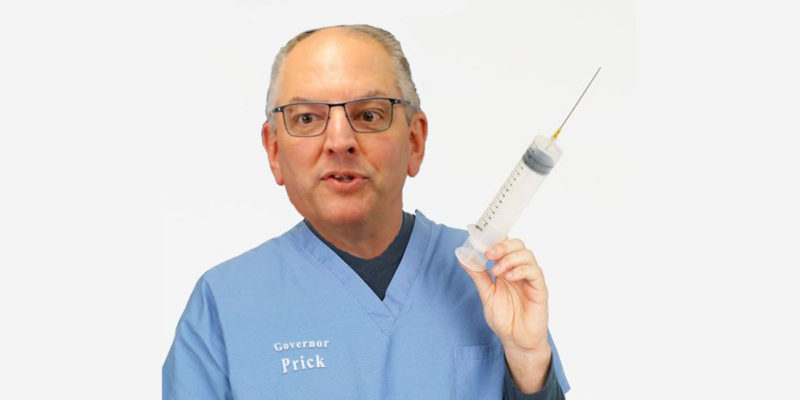 …despite the fact that the headline of our story this morning, which asserted that the House Health and Welfare Committee wouldn’t actually take action to change state policy on mandating vaccinations for school children, turns out to be correct.

But not in the way we forecasted, and thus the apology is gladly given.

And then Dictator Edwards stepped in to slam the door and break out the needles. If you want to call this guy Governor Prick, do so with our blessing.

Republican lawmakers seemed poised Monday to vote against Gov. John Bel Edwards’ coronavirus vaccine requirement for some Louisiana students, but the Democratic governor intends to overrule any legislative rejection and add the shot to the immunization schedule starting next year.

The fate of the plan seems likely to be decided by the courts, with Republican Attorney General Jeff Landry and the Edwards administration at odds over whether the coronavirus vaccine requirement can be legally enacted by the governor without support from the full Legislature.

Even if the coronavirus shots are mandated at Louisiana schools, the state allows broad exemptions for parents and students to opt out by submitting a written objection from a doctor or a general written dissent.

But some lawmakers worry that children could be excluded from in-person classes if they file such paperwork, even though the Louisiana Department of Health says it doesn’t intend to push the exclusion of unvaccinated children from school. The lawmakers—several of whom say they are vaccinated—say parents should get to make decisions about the shots their children receive.

If it takes effect, the initial rollout of the vaccination requirement would apply only to age groups for whom the U.S. Food and Drug Administration has given full approval of the immunization. Currently, that’s only high school students 16 and older. But that would broaden to cover younger children and day care facilities if the FDA grants full backing to the shots for more age groups.

The hearing lasted so long that the committee took a vote before it was even over, for fear the members would be hustling home to their families. The testimony lasted for a while after the vote, and the folks speaking presented a completely one-sided story. This is most certainly not a popular action on Gov. Prick’s part.

The bipartisan nature of this thing was what struck us. The chief testifiers against it included Republican Attorney General Jeff Landry and Democrat activist Robert F. Kennedy, Jr., and then of course you had a 3-2 vote in favor of blocking Edwards’ rule among the Democrats on the committee, with three abstentions.

Kennedy was a whole lot more convincing than Gov. Prick’s goons from the Louisiana Department of Health were in testifying at the hearing. Dr. Joseph Kantor, the diminutive Robert Reich analog who heads up the state’s COVID response, repeatedly dropped unscientific and dishonest testimony, claiming that the “best studies” show vaccinated immunity is better than natural immunity to the virus and sounding alarm bells about the 18 kids in Louisiana who’ve died of COVID, only to admit that 14 of them had co-morbidities.

Then there was his insistence that people can opt out of the mandate. First, that’s a dubious proposition because schools can then ban the unvaccinated kids from attending, so what kind of opt-out is that, really? And second, if you can opt out of it then why bother take action to impose the mandate in the first place?

And on and on. It was a terrible show.

We also found out that the state has largely hidden the 800 number it’s set up for people to call to report ill effects from the COVID vaccine, something Kantor wasn’t exactly candid about.

It was a very poor showing. Frankly, after this debacle for Edwards and his authoritarian and undemocratic response to it, one would not be surprised at all to see one of a number of things happening. First, a petition signed by the House (and, in a sane world, by the Senate as well) that would dissolve Edwards’ COVID emergency. Second, a special session called by the Legislature to void Edwards’ administrative rule and ban the vaxx mandate for school kids – if not more than that. Given the willingness of Cox, Larvadain and Johnson to go against Edwards on this issue in that committee, not to mention two others in Adams and Republican Joe Stagni who voted against Edwards after refusing to overturn his veto on the transgender sports bill earlier this year, it would appear there is a veto-proof majority for taking his power to jab the school kids away.

This can’t stand. We’re encouraged that the public outcry against this stupid, Nuremberg Rule-violating atrocity disguised as a public health policy has mobilized a bipartisan group of legislators to oppose Edwards today, but there’s a lot more to be done. Governor Prick has to be reined in, once and for all, and rendered the lame duck he deserves to be.