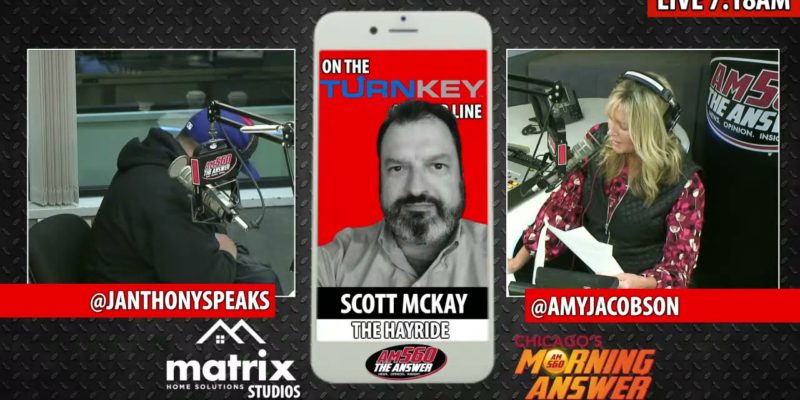 This was an early wake-up call from the folks at the Morning Answer show in Chicago, the one Dan Proft usually hosts – but this morning it was co-host Amy Jacobson and guest host John Anthony manning the reins. They had me on due to a couple of American Spectator columns I wrote last week – one dealing with the potential for a Biden war, and the other dealing with the Gary Chambers entry into the Louisiana Senate race.

It goes 19 minutes, and it’s pretty good radio. When we started talking about the supply chain toward the end might have been the most fun part.

The Wag The Dog war scenario has generated a good bit of buzz, and that Spectator column popped quite a bit as a result.

Here’s the thing: yes, we more or less guaranteed the Ukrainians’ territorial integrity back in the early 1990’s in exchange for their agreement to surrender the rather large nuclear stockpile left over from the collapse of the Soviet Union. But it’s 30 years on at this point. Exactly what is the length of that guarantee?

It isn’t as though we’ve built some great alliance with Ukraine over the course of that time. The fact is, combined imports and exports between the U.S. and Ukraine come to less than $4 billion a year, and what ties there are between us mostly come from foreign aid we send to Ukraine which is more or less a money laundering operation benefitting some of the Usual Suspects in Washington.

Having our foreign and national security policy yoked to the grifting of Deep State crooks makes us a banana republic, not a world superpower. It’s not worth a single drop of blood being spilled by our people.

Hopefully public sentiment will shut down any notion that we’re going to fight over this. Send the Ukrainians guns so they can bleed the Russians white if they go in, sure. That worked for us in Afghanistan. But this idea that the U.S. or NATO have to get in a world war, when at the end of the day it’s obvious Putin is simply manipulating things so he can stage a coup and put a pro-Russian puppet in charge in Kyiv and it’s not obvious the majority of the Ukrainians would even object to that, is crazy.

And no, we aren’t under any obligation to fall in line behind the Biden administration if they bumble their way into such a war. In fact, Congress shouldn’t authorize any combat deployments there, and members of Congress who vote that way should face the music in this spring’s party primaries. Voting to make Joe Biden a wartime president and to make Mark Milley into a modern-day George Marshall is just about the most indefensibly stupid thing imaginable.

Anyway, it was a fun segment this morning. Hope you guys enjoy it.

Interested in more national news? We've got you covered! See More National News
Previous Article SADOW: Don’t Expect Big Changes From Reapportionment In Louisiana
Next Article Would The GOP Be Better Off Without Trump?