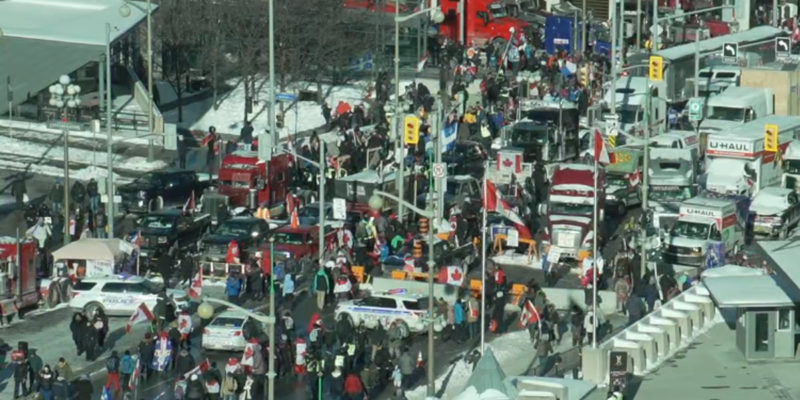 I have been fascinated to watch over the last several weeks the development of the situation involving Canadian truckers who resolutely refuse to be told what to do by their government.  This coalition of truckers and their supporters, the Freedom Convoy, have vowed to stay in place until Canada drops all of its harsh Covid-19 mandates including a mandate that requires cross-border truckers to either get vaccinated or quarantine for two weeks upon returning to Canada.  This standoff is definitely making a statement given that the bridge being blocked, one of the busiest border crossings in North America, supports roughly 30% of yearly two-way U.S.-Canada trade.

The gist of the issue is that the Freedom Convoy is comprised of people who may lose or be banned from their jobs because they haven’t complied with draconian vaccine mandates.  Individuals who have been fired include volunteer firefighters, trash cleaners, and manual laborers because they wouldn’t show their vaccine cards even though most of them are vaccinated!  It is clearly the principle of the matter to these truckers whose collective attitude is “we may choose to be vaccinated but you aren’t going to force us to.”

This resistance, we should note, comes on the heels of two years of daily life in Canada that’s had severe Covid restrictions imposed upon it—including curfews, heavy fines, total shutdowns of gyms and theaters, as well as restrictions on international travel.  Canadian psychologist, writer, and professor, Jordan Peterson, recently called on Canadian Prime Minister Justin Trudeau to “open the damn country back up,” stating that his country is “becoming increasingly authoritarian.”

Now, in what many worldwide are deeming a vast overreaction to a peaceful protest, Prime Minister Trudeau has invoked the Emergencies Act (typically used in wartime) to silence this resistance to the COVID mandates.  By invoking these powers against his own people, he has granted himself and his government broad power to shut down political speech in his own nation.  Among other powers, it provides the Canadian government authority to force private companies to perform services, freeze bank accounts, and fine and incarcerate those in violation of its orders.

Trudeau has apparently refused to meet with the protesters, who have asked him to repeal the vaccine mandates and other harsh restrictions.

However, doing just the opposite, to block the efforts of this resistance, the Canadian government has employed several tactics, including confiscating the truckers’ fuel and directing GoFundMe to withhold nearly $10 million raised to support the Freedom Convoy.  Further, news reports state that this past week an Ontario court ordered the U.S.-based Christian crowdfunding site GiveSendGo to freeze all access to the millions raised on its platform.

There are also reports that Canadian banks will receive the names of people involved in “Freedom Convoy” protests, serving as a first step in a promised financial crackdown on demonstrators.  Finance Minister Chrystia Freeland has indicated that some accounts have already been frozen.

As the situation continues to escalate and the crackdown ramps up, there are news reports that Ottawa Police are clashing with truckers as they make mass arrests, including smashing in windows to forcefully remove individuals from vehicles.  There are also reports of police snipers on rooftops.  In one instance, dozens of brave peaceful protesters, many of whom are apparently veterans, stood their ground and refused to move as the wave of police officers bore down on them.

What we are seeing here is a classic and timeless example of people finally standing up and saying, “that’s enough.”  It is a stark but necessary reminder that the final authority in a nation remains in the exact place it has always been—with the people.

What President Reagan warned about regarding America applies equally to the Leftist Canadian government of Trudeau: “America stands on four main values: Faith in God, Freedom of Speech, Family and Economic Freedom.  If fascism ever comes to America, it will come in the name of liberalism.”

The regular, everyday people of Canada clearly cherish their freedoms and liberty and are simply not going to give them up.  This incident reminds us yet again of the 10,000-year-old lesson that government must be tightly restrained, otherwise, by its inexorable nature, it usurps and crushes.