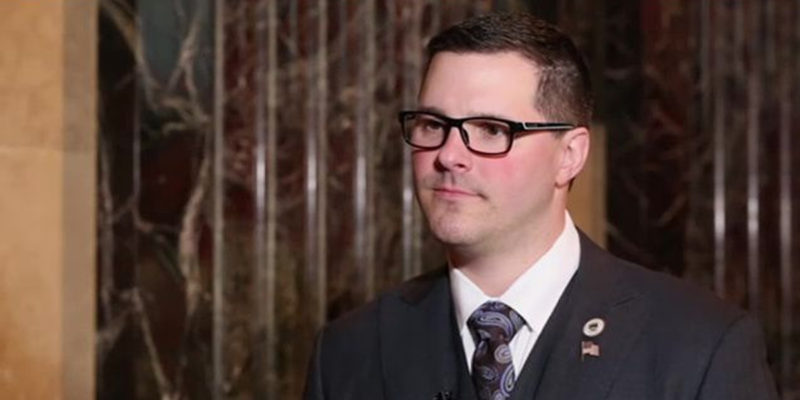 Just as Louisiana Republican Sen. Bill Cassidy has put in a strong bid to win Strange New Respect among leftists inside and outside of national government, so has GOP state Rep. Barry Ivey within the state’s borders.

Strange New Respect becomes recognized when a heretofore solidly conservative elected official begins to act in ways that win applause from the left, typically by surrendering on matters of principle that effectively promotes the left’s agenda. In Ivey’s case, it’s more quality rather than quantity: the occasional defective judgment on his part often comes with attention-grabbing histrionics.

For, as the record shows, Ivey still casts a lot of conservative votes. His Louisiana Legislative Log average score over his 2013-22 House career at 73 ranged from the only 100 one year to a low of 45, although in a year that scores were down overall (100 means perfect consonance with a conservative/reform agenda). And he does a good job in the kind of bills he offers: of the 180 regular session bills he has filed as the primary author, a surface review of the Log shows 24 were classified as good (meaning nontrivial and conservative/reform in nature) bills to watch during a session and only two were bad (liberal/populist in nature).

Interestingly, of those 180, 24 also became law. But, indicating Ivey’s recurring problem as a lawmaker, none of his good bills ever made it into law. In fact, the 24 are incredibly modest in impact, which Ivey admitted this month in a wide-ranging interview (and sympathetic one, as he and the interviewer, a former far left legislative candidate, have worked together on past legislation) by the left-wing interest group Sexual Trauma Awareness and Response.

Moreover, in the interview he claims, and perhaps rightly so, that on occasion large portions of his bills that fail end up passing in others. An example he used was particularly egregious: his bill disdained by his own party, its members rallied behind another similar one by a Democrat, which implies a somewhat contemptuous view by his colleagues of him.

If so, Ivey asserted that ostracism comes because of his personal legislative mantra – people, principles, and policy – that excludes “politics.” Which is precisely the motivation he assigns to those who oppose his preferences on some issues. For example, to him that explains why most Republicans kept their distance from Democrat Gov. John Bel Edwards’ tax “reform” based upon a tax-and-spend agenda – they supposedly didn’t want to give the governor some political credit, rather than they simply opposed bad policy – as well as typifying the conservative strategy to right-size government by repealing tax hikes under Edwards as a kind of “false conservative doctrine” born of an attempt to please the public through display of tax-cutting credentials.

His publicly proclaimed holier-than-thou attitude, often aimed at his own party, picks up fawning mainstream and more overtly leftist media coverage than any other legislative Republican, despite his relatively low stature in the party (even being a third-term representative among the minority of Republicans who voted to put Speaker Clay Schexnayder in the top spot, he holds no leadership positions, in committee or otherwise). Thus, Ivey receives favorable mention when he tries to short-circuit conservative efforts to rein in gubernatorial emergency powers that sacrificed liberty for ineffective pandemic policy or that permitted insecure elections, quits an important money committee because he says it was too politicized, and goes ballistic on the House floor when his party in the main sends a bill of his that would have reapportioned the Supreme Court to create, as Democrats preferred, two rather than one majority-minority districts as the latter would be closer in proportional terms to the roughly one-third black population in the state, to the ash heap.

Small wonder almost all of his party colleagues wouldn’t even let it come to a formal vote when Ivey constantly lectures in public arenas to these (in his words) “laziest” lawmakers on how soiled they supposedly are compared to his self-proclaimed pristineness. While Ivey asserts they cut bill consideration off because they wanted to avoid a formal vote that might bring unfavorable publicity, tabling it stood in for that expression and the denial came in that form in order to rebuke him for his crassness – and his undeserved scorn, at that.

Because the irony here is the explanation Ivey prefers about it all – politics taking precedence over quality principled policy options – in fact is a false, politically-inspired talking point frequently employed by the left utterly without factual basis. Edwards is the foremost recent practitioner of this tactic, such as with his tax changes agenda when he insisted by definition opposition to its tax-and-spend basis was “partisan” and “political,” when simply all along this criticized demonstrably bad policy. The same applies, by way of example, to Ivey’s complaints about rejection of his reapportionment bill.

While Ivey alleged the dismissal of the bill was about race, insofar as it created an additional judicial M/M district, he made both an analytical error and an error in principle. Analytically, he came up short because supporters of two M/M districts backed it precisely for the reason Ivey says he disdains – politics. A Democrat would win in an M/M district, ensuring them more power – the currency on which liberalism is based – on the Court. A desire for proportional racial representation is only the cover story to deflect from that.

Which leads to the error in principle: that the Court is about “representation.” The judiciary decidedly is not; not being a majoritarian institution explicitly designed to make policy, it serves (when not perverted by the same liberalism which defines its principles by how much power it can obtain) as an adjudicatory branch of government. Justice is colorblind, and it’s not the job of justice to “represent” some sector of society but to apply the law and flesh out the Constitution in an impartial and even-handed fashion, using right reason. This principle has served as a bedrock of American jurisprudence, and means the entire rationale behind Ivey’s plan was bogus.

Oblivious to this, Ivey’s entire case falls apart. And makes one wonder, if Ivey felt so excitably about the issue of “fair” black representation as he accused his colleagues of neglecting in his rant, why he didn’t speak up on the numerous occasions where it actually was meaningfully debatable, on a raft of amendments to reapportionment bills for majoritarian institutions that passed out of the Legislature? Why did he choose to do so only on his bill, even as unaware the issue didn’t even apply in his case? Perhaps rather than political motives of others as offering a global explanation for the incident, far more parsimonious an elucidation is his personal pique.

And it’s here where in Ivey’s stated political slogan as he studiously excises the fourth “P” of “politics” he lets slip in the door another fourth “P” – publicity. It’s far too easy – indeed, lazy – to declare disagreements with you automatically “political” because you see your judgments as inherently “principled,” when in fact not only are others on that issue principled, but (regardless of whether you realize that) superior to yours, not only in a demonstrable sense using fact and logic (as above regarding Court districts), but also in an instrumental sense, insofar as the others win in the marketplace of ideas.

The latter is what Republican state Rep. Lance Harris alluded to partly in response to Ivey’s tirade when he said “life does not give you what you want. It gives you what you deserve.” In the context of the larger debate about reapportionment, what passed – and all the various successful plans adhere to constitutional guidelines – was a consequence of elections and which ideas won, as implemented through those elected. Had a different argument proved superior to the electorate who then would have put different people into office, the state might have well a legislature produce different maps with more M/M districts which also would pass constitutional muster. But that general notion the electorate found inferior, and we got what we got, because elections have consequences and you get what you deserve from these.

In the special interest interview, Ivey called himself an introspective guy. Perhaps he should reflect upon his tendency to disparage in public ways those who disagree with him as grubby with politics compared to his anointed status – which at those intervals leads him to betray conservative principles even as he convinces himself otherwise – not as a function of putting policy over politics, but as chasing murmurs of approval from others in the mainstream and social media who also proclaim themselves anointed as they increasingly bestow upon him, one story or interview at a time, Strange New Respect.

Interested in more news from Louisiana? We've got you covered! See More Louisiana News
Previous Article GARLINGTON: The Ukraine Should Not Be A Priority For The US
Next Article MARSH MAN MASSON: No Sh*t! This TRD Catches Fish!