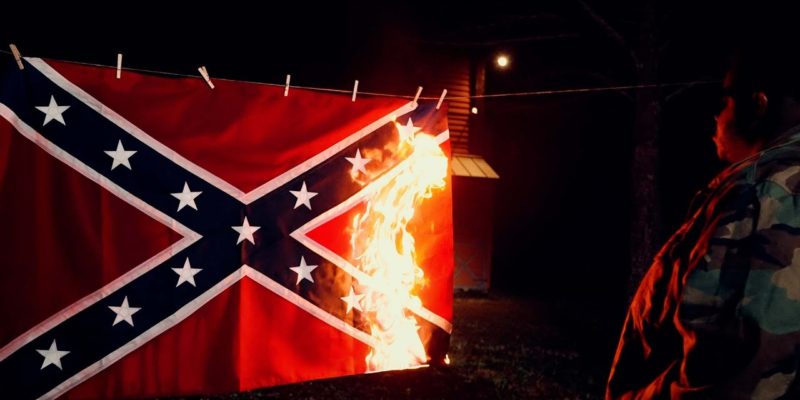 Gross, right? This isn’t a major reflection on Chambers’ fitness to serve in the U.S. Senate, as it was already established that he has none, but since there are left-media outlets swooning over the “edgy” and “innovative” web ads Team Chambers is popping out which are designed to generate an emotional response from black voters and guilty white leftist donors alike, we figured we’d at least tap the brakes on the adulation.

Chambers’ video production guy is Erwin Marionneaux. He’s a “filmmaker” in Baton Rouge. Here’s his Facebook. Truth be told, he’s got some really interesting photo and video work on display there. Honestly.

But this happened a few years ago…

A teacher’s aide in Plaquemine is in hot water tonight, accused of two counts of indecent behavior with a juvenile.

That employee also helped out with the band. When allegations surfaced he was fired.

Erwin Marionneaux is accused of touching a 15-year-old and sending her inappropriate text messages.

It was inside the walls of Plaquemine High where investigators say Marionneaux met his victim.

Her family’s attorney says it was good parenting that uncovered the relationship.

“Her mother doing what parents do, checking her phone and messages, and the mother looked and was able to view text messages between her daughter who was 14-years-old and Mr. Marrioneaux,” Shannon Battiste said.

That WBRZ story included the dirty text in question…

VICTIM– “No, cuz you haven’t satisfied me”

EM– “Lol thAt what you want”

Yuck. Apparently the police report also contains an accusation that he felt her up in a private area. This

He was due for trial in February of 2016 but we can’t find any record of an outcome. He also doesn’t come up in any searches of registered sex offenders, which tells us he managed to skate on this somehow.

And maybe it was a minor indiscretion. Whatever. We’re not really interested in burning down Erwin Marionneaux, because honestly he seems like he’s fairly talented as a video guy and good for him.

But here’s what we noticed about this. If you search his name on Google or DuckDuckGo, that WBRZ story above is the first thing you find.

But you won’t find any reference to it in Greg Hilburn’s piece for the USA Today papers around the state about those “edgy” ads Chambers has, which has as its title “What we know about Louisiana Senate candidate Gary Chambers Jr.’s provocative ads”…

Chambers opening ad called “37 Seconds” in which he smokes a blunt has been viewed by nearly 7 million people on Twitter alone.

“Every 37 seconds someone is arrested for the possession of marijuana. Black people are four times as likely to be arrested for marijuana laws than white people,” he says in the video, citing data from the American Civil Liberties Union. “Most of the people police are arresting aren’t dealers, but rather people with small amounts of pot — just like me.”

It was shot, directed and edited by Baton Rouge filmmaker Erwin Marionneaux.

Though the ad went viral, not every Democrat in Chambers’ home state was impressed.

The “Scars and Bars,” which already has about 750,000 views on Twitter, was also shot, directed and edited by Baton Rouge filmmaker Erwin Marionneaux. It was written and produced by United Public Affairs founder and New Orleans resident Erick Sanchez.

Again, this is a “what we know” piece talking about Chambers’ ads. It mentions Marionneaux’s name twice, and neglects to note that he got busted on two counts of indecent conduct with a juvenile six years ago, which is the first thing you get when you search his name on the interwebs.

That’s something we’d be awfully surprised to see left out of a story about some conservative Republican’s “edgy” new ads. And we know you’re not stupid enough to believe that these guys didn’t bother to search Marionneaux’s name before they published a story about him.

Everyone keeps talking about the way our team does social media. Well it’s @TheErwinM my media director responsible for the visuals you see. He and I work daily on how we can authentically let you in.

And another friendly writeup which mentions Marionneaux without noting the first thing you get when you Google him. And another, this one from Campaigns & Elections Magazine.

There are lots of others. You get the picture.

Again, we’re not here trying to take Marionneaux down or to cancel him. He’s good. And while the message of those ads is hardly productive, particularly given the demographics at which they’re aimed, they’re well-shot, visually stimulating and quite attractive from an artistic perspective. They’re not undeserving of media attention.

We just wanted to point out that if they came from Gary Chambers The Republican, you’d see screaming headlines about how he was using child molesters to produce his dangerous propaganda ads. And instead something very obvious is being whitewashed by people who call themselves journalists.