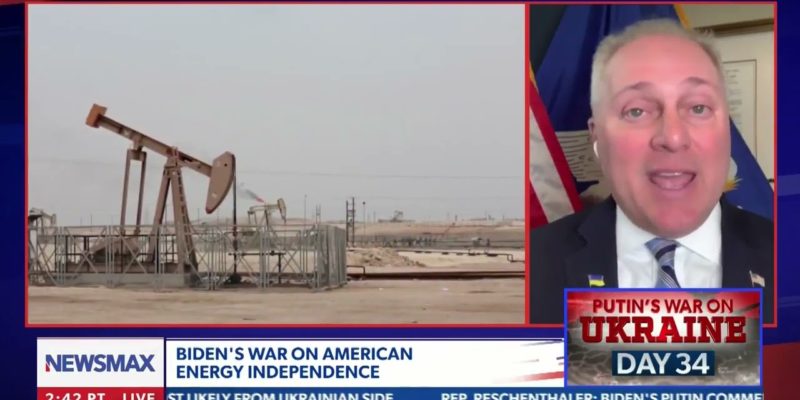 Here’s a clip from Chris Salcedo’s show yesterday, in the aftermath of  Monday’s terrifying Joe Biden press conference in which he denied he’d said anything his administration needed to walk back about the war in Ukraine.

That was a fiasco of biblical proportions, of course. I have a whole American Spectator column out this morning talking about it, which you’re welcome to check out here.

As Scalise noted, just about everything Biden and the people who control him have done with respect to Russia and Ukraine has made the situation worse. It’s notable that Biden is ramping up his rhetoric about what a terrible guy Vladimir Putin is while Putin’s people are currently at the negotiating table with the Ukrainians.

The U.S. doesn’t have any leverage to use on behalf of the Ukrainians that Biden will maximize by running his mouth about deposing Putin. It’s crazy that his team even thinks that’s possible in the aftermath of that disastrous Afghan pullout last year. Russia isn’t afraid of the U.S. military even though they probably ought to be, given the mess they’ve run themselves into in Ukraine.

Scalise also gets into the quintessential example of just how awful this administration is – namely, its treasonous energy policy which is resulting in massive windfalls for bad-guy state oil interests not just in Russia but Iran, Venezuela and other despotic countries. It’s worth a listen.

The thing is, Scalise isn’t some lone voice screaming into the void. The polls keep getting worse. This hit yesterday…

With Russia waging war on Ukraine and talking use of tactical nuclear weapons — while inflation rages at home — President Joe Biden’s approval rating (40%) has reached a new low in the latest NBC News poll.

Also, in an ominous midterm sign for Democrats, registered voters favor Republicans as the party of choice to hold the majority in Congress for the first time since 2014.

“What this poll says is that President Biden and Democrats are headed for a catastrophic election,” NBC News pollster Bill McInturff said.

Biden’s 40% approval rating is not just the lowest of his presidency, but 70% of Americans have low confidence in Biden’s ability to deal with Vladimir Putin’s invasion of Ukraine and a plurality of blame Biden and his policies for high and steady inflation in the economy.

Also, 80% fear the war will raise gas prices and possibly devolve into nuclear war and overwhelming majorities (71%) say they believe the country is headed in the wrong direction and disapproved of the president’s handling of the economy, with only 33% approving, according to NBC.
…

Biden’s disapproval has ticked up to 55% in the poll.

Everybody knows. Even the hard-core Democrats supporting this clownshow know – they just don’t want to admit it.

What scares us is what these people will do out of desperation as the midterm elections get closer. It’s unlikely they can actually pass anything of note, but Biden’s handlers are going to try to put the country on some sort of emergency footing in order to reframe things, and when they do, anything can happen.

It’s an interesting time to be alive. That’s a complaint, in case you haven’t noticed.

Interested in more national news? We've got you covered! See More National News
Previous Article Was The Slap Staged? Does It Matter?
Next Article The Storm Outside The Capitol Today Might Pale Compared To…