…what will be happening inside the building when state legislators attempt to override Gov. John Bel Edwards’ veto of the congressional redistricting map.

We’ve had a couple of posts on this subject already. I had one a couple of weeks ago now, talking about the internal politics of it. Mike Bayham had one yesterday talking about how it’s time for Republicans to unify around the goal of slapping Edwards down.

But amid a weather forecast calling for wind gusts of more than 50 mph and copious amounts of rainfall, the override session that House Speaker Clay Schexnayder is the focal point of will get going, and nobody really knows how things will go.

The decision to hold the veto session was mostly along party lines with all 12 Senate Democrats and 32 House Democrats returning ballots that indicated they did not want to hold the session. One Democrat, Rep. Francis Thompson of Delhi, sided with Republicans.

The veto session will require lawmakers to pause the current 2022 Regular Session for up to three days.

Overriding Edwards’ veto, which requires a two-thirds vote in each chamber, will be a difficult though not impossible challenge as Republicans hold a super-majority in the Senate but are two votes shy in the House.

The Senate isn’t in doubt because of that supermajority. The votes for the override are there. In the House, Schexnayder has two problems.

The first one is he has to find one more vote outside of the GOP. He has Francis Thompson, who might as well go ahead and switch parties to Republican given his voting record of late. But he’s got to find someone else between independents like Malinda White, Joe Marino and Roy Daryl Adams or maybe another Democrat who turned in a “no” card on holding the override. The latter possibility is very slim.

Going one-for-three among White, Marino and Adams is his best chance to get to 70.

But Schexnayder has a bigger problem, and it’s within his own delegation. It’s a problem of his own making and it’s the same one he’s had from the beginning of his time in office.

Namely that he’s never been able to successfully break bread with the conservatives in the Legislature despite claiming loudly that he’s one of them.

The congressional map in the bill authored by Schexnayder that Edwards vetoed is not the “Republican” map per se. There was another map in a bill passed through the Senate overwhelmingly by Sen. Sharon Hewitt. That bill was favored by most of the state’s congressional delegation. Rep. Garett Graves didn’t like it and Schexnayder drew a map Graves liked better – and the Senate allowed him to substitute his map into Hewitt’s bill when it hit the House.

Three conservatives voted against Schexnayder’s bill as a result: Reps. Blake Miguez, Beryl Amedee and Gabe Firment. Miguez doesn’t like the way the bill splits up St. Mary and St. Martin Parishes, and Amedee doesn’t like that Morgan City, which she represents, gets cut up.

And efforts to pressure them into changing their votes really haven’t met with a lot of positive feedback particularly from Miguez, the head of the House Republican delegation.

This happened over the weekend. 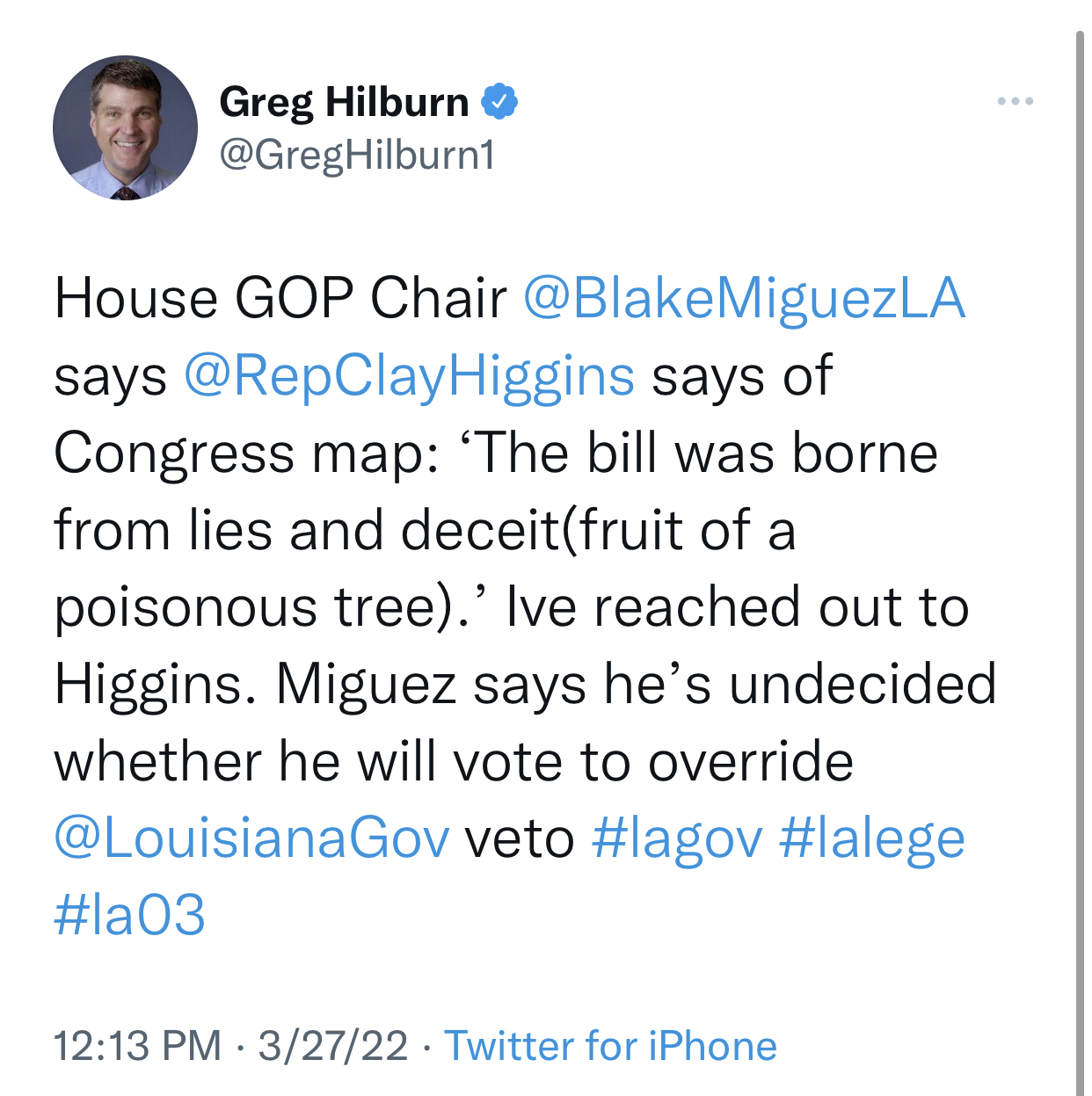 No sooner did that pop out than we got this… 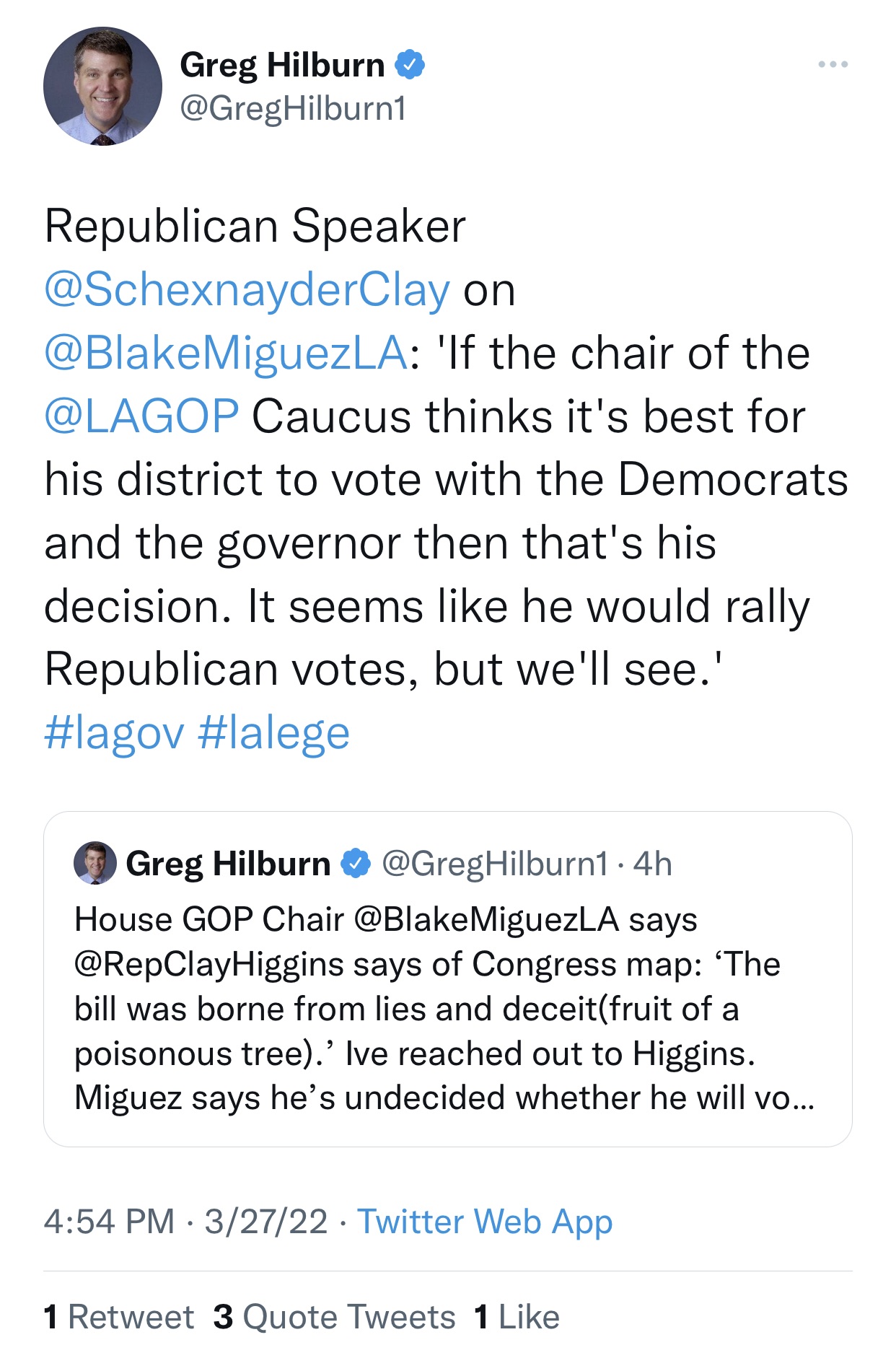 That didn’t go over well at all. 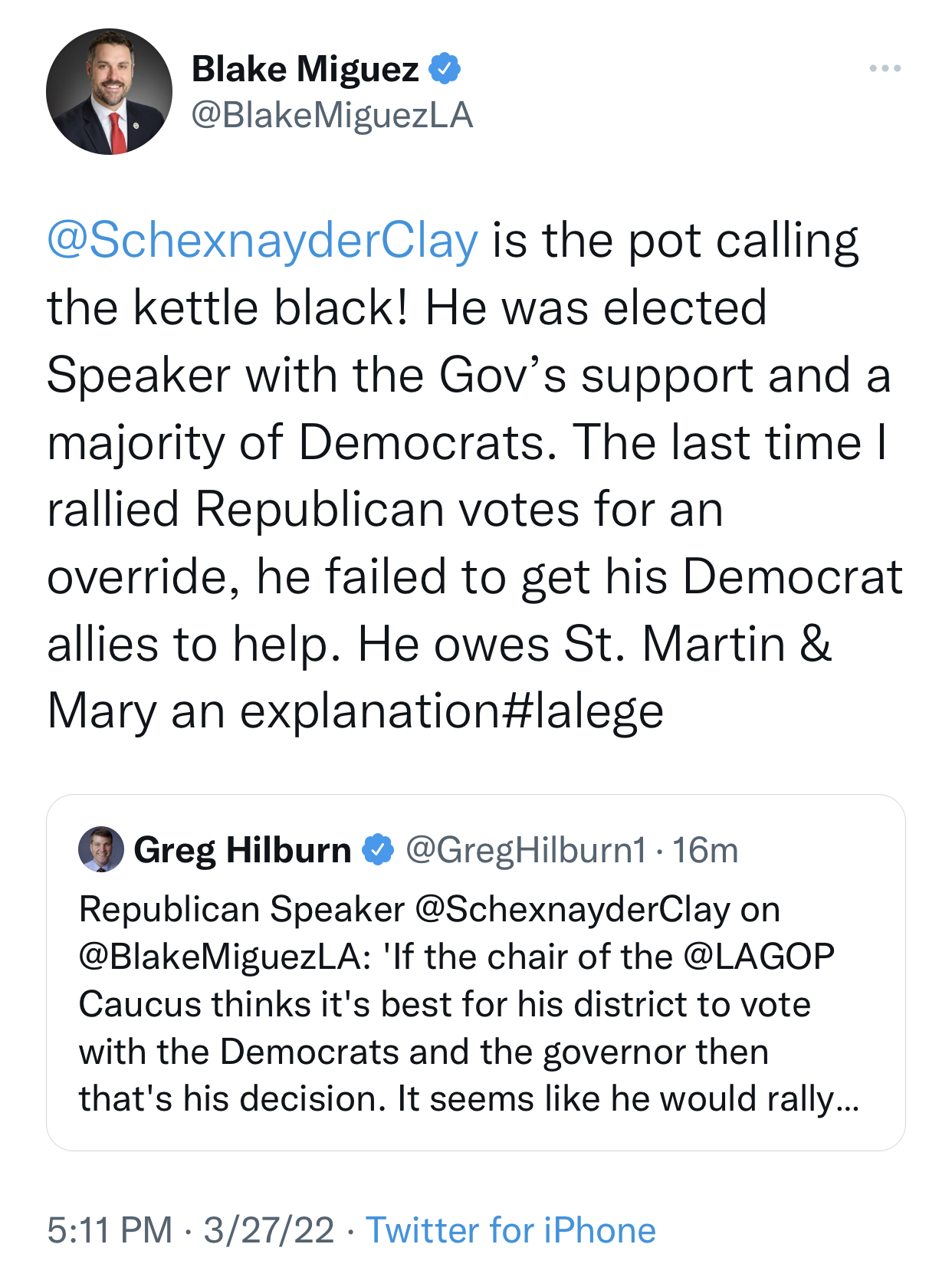 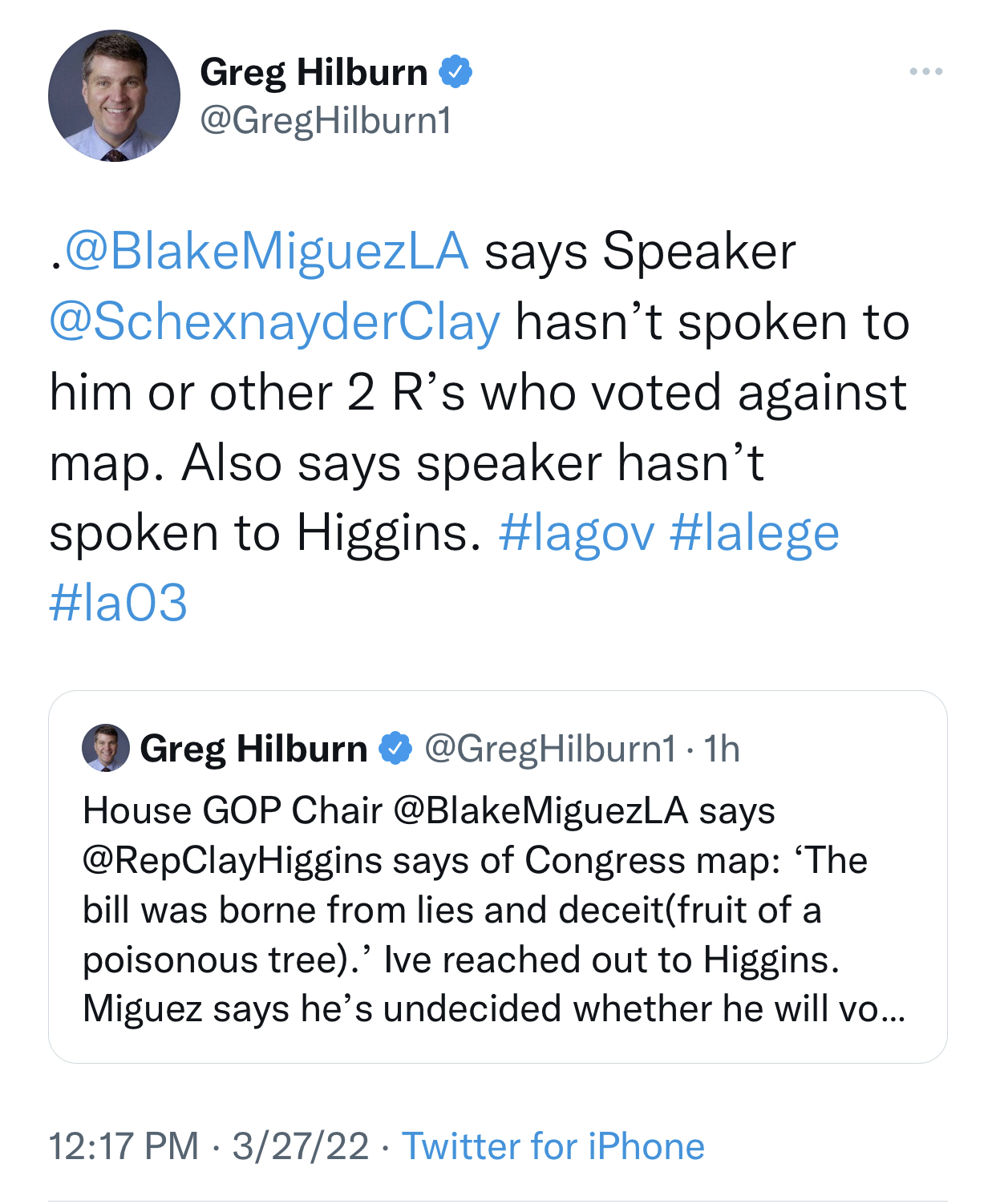 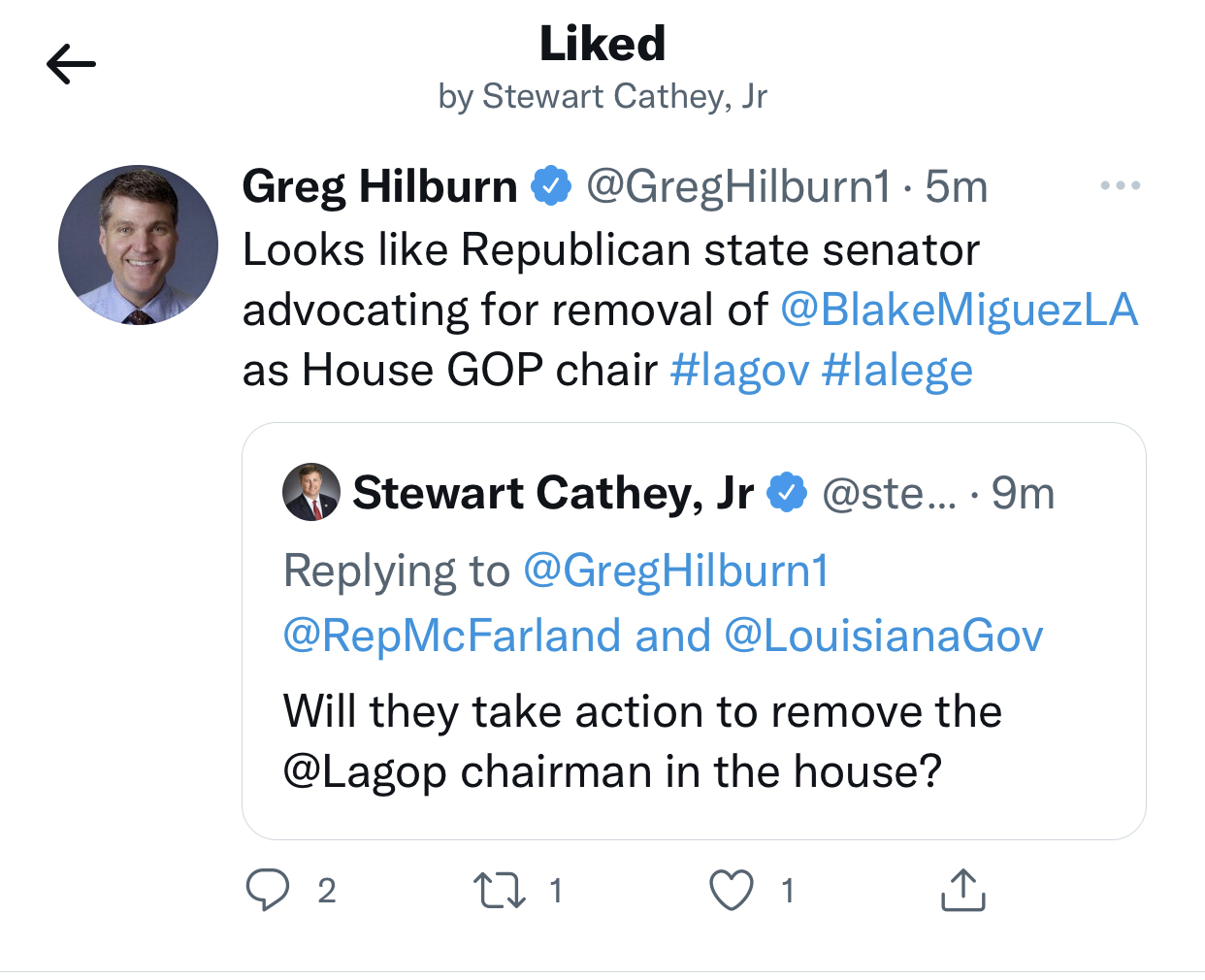 And then Miguez’ Congressman, Clay Higgins, began to weigh in… 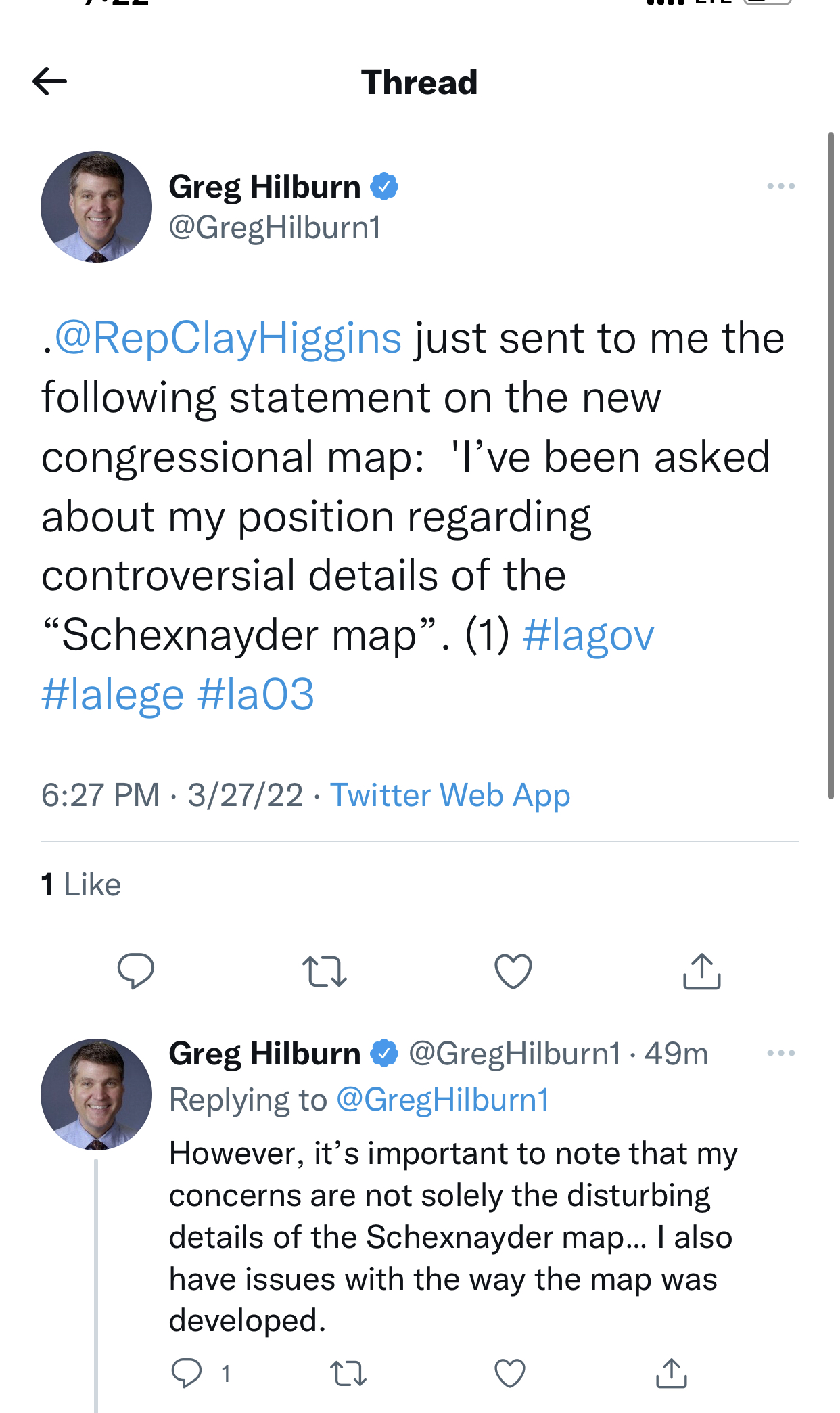 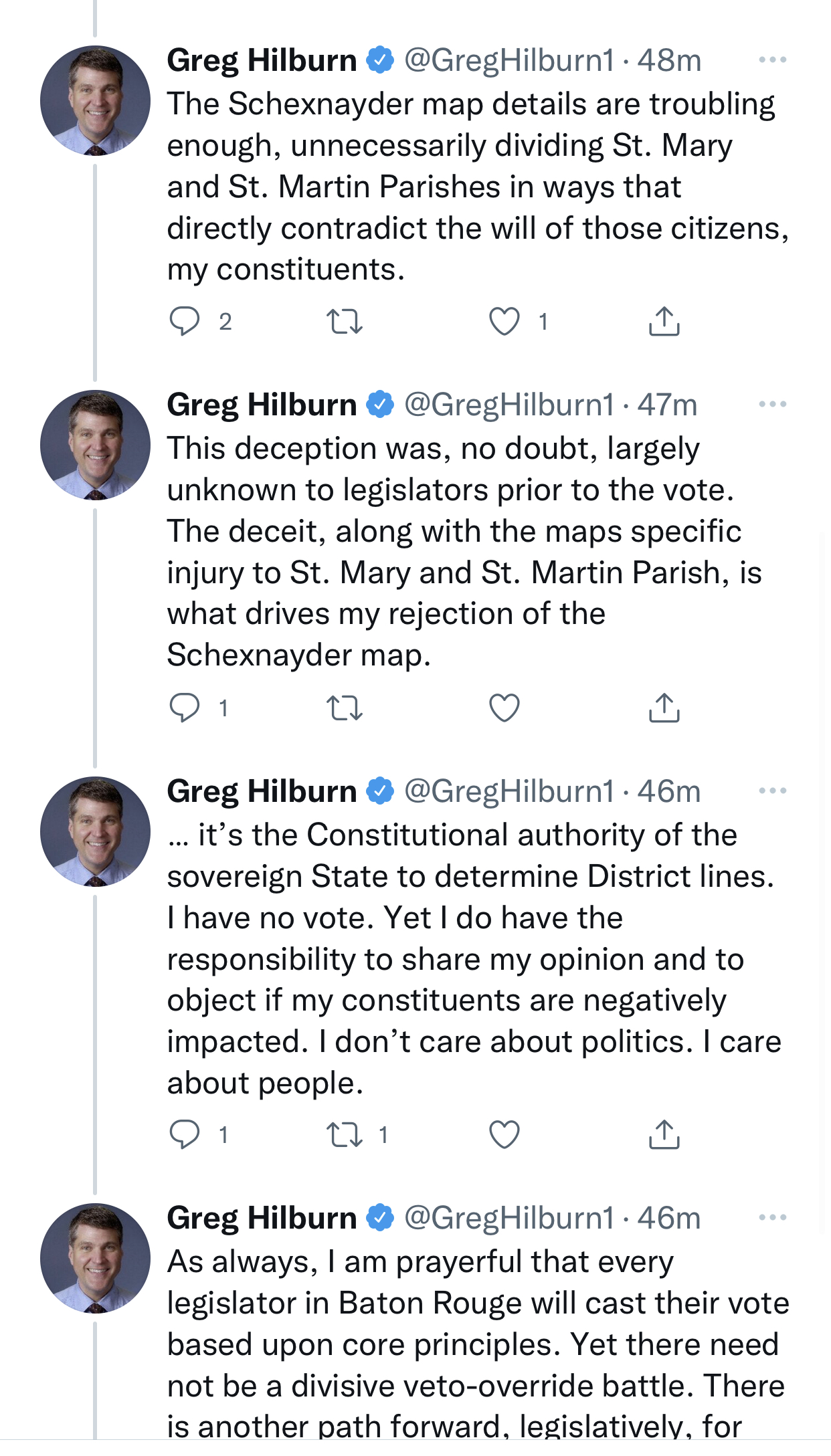 So where do we stand here?

If we had to lay money down on this, it’s going to be that Miguez, Firment and Amedee are going to relent and vote to override the veto. They’re going to be pressured by other conservatives to do it, because at the end of the day nobody wants to be blamed for giving Edwards a win.

But we’re also going to bet that the override fails. Because, again, if we had to bet, it’ll get 69 votes in the House instead of 70. The independents and Democrats won’t back Schexnayder.

We could be wrong about this, and we hope we are. Certainly in principle Edwards deserves an override. Hell, he deserves a whole lot worse than that.

But Schexnayder has so badly failed on this, just like he’s failed repeatedly to pass conservative policy, because of mismanagement of his own delegation.

He doesn’t even talk to Miguez. It’s idiotic. It’s fine that Schexnayder doesn’t like him. Have a transactional relationship with him. But Schexnayder went six months without having a conversation with Miguez and he doesn’t even go to the delegation meetings. There’s word he actively discourages his supporters from showing up at those meetings so that the delegation can’t get a quorum.

And now he’s depending on Miguez to come across for him when Higgins is openly trashing Schexnayder’s map.

The congressional map should have been easy to draw. These are not swing districts; all five of the Republicans are as safe as can be, and nobody is unhappy about the current map – other than the partisan Democrats in the “civil rights” community, who are anything but honest about what they want. So really all that needed to be done here was to sit down with the five Republican congresscritters, or their representatives, in one room and just hash out a map everybody could live with.

Getting five people to agree when you aren’t contemplating major changes to the map really isn’t that hard. And it’s a mess nonetheless.

We’re rooting for Schexnayder here, because Bayham is right that overriding Edwards is a win Louisiana has needed on some topic for six years. But if he gets it, it’ll be a win despite his performance, not because of it. And if the override comes courtesy of Miguez, Amedee and Firment relenting, then Clay Schexnayder will literally owe them his political life and he damn well ought to deliver on whatever requests they decide to make of him.