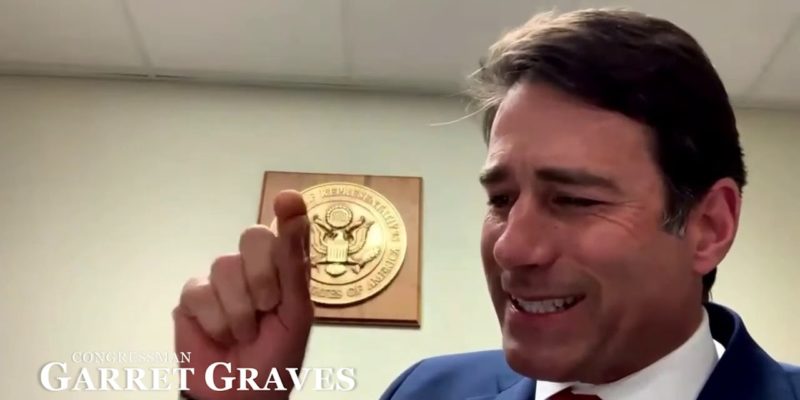 That’s a possibility Jeremy Alford raises in his latest Baton Rouge Business Report piece, which has a good interview with Graves on a number of topics included.

Should Republicans gain control of the U.S. House, some see a gavel opportunity for the Baton Rouge native on the Transportation Committee, where he currently serves as the Aviation Subcommittee’s ranking member. Graves has also been mentioned as a likely candidate for the U.S. Senate, should a seat actually become available in Louisiana.

Outside of the beltway and closer to home, speculation centers more on the 2023 race for governor. Up until recently, Graves hasn’t discussed the contest much, focusing instead on his reelection bid and the constant flooding and hurricane needs of his coastal district.

In an interview for this column, Graves was asked why his close friends and key supporters seem convinced he’s seriously considering running for governor.

“There’s no secret plan. I’ll put a hand on a Bible, and my wife will tell you the same thing,” Graves says. “We have had, I think I can easily say, hundreds of phone calls of encouragement. People aren’t excited about the future right now, and they’re concerned about the direction of the state. They think the next governor is going to play a pivotal role in the future of Louisiana.”

Graves says there are three indicators—education, general health and the percentage of residents living in poverty—where Louisiana has underperformed. He calls the situation “inexcusable,” especially with the state’s vast resources, like its rivers and port system, energy industry, commercial seafood and culture.

“We’re doing awful. It’s an embarrassment,” the congressman says, later adding, “Does it piss me off? Yeah, it pisses me off. I think people hear me talk about that and they immediately go to, ‘This guy is running for governor.’ I suspect between the phone calls and the messaging we give, people migrate that way.”

Asked if he had ruled out running for governor in 2023, Graves responded, “At this point, we are 100 percent focused on this race, the campaign this year and the job we’ve got to do. The thing is, if you do a good job in the job you have, it creates options for you.”

It’s worth reading the whole thing, as Graves has a lot to say about things like flood and hurricane relief, flood insurance and infrastructure. Public works, whether that means canals and drainage, roads, coastal protection and the like, have always been in his wheelhouse. And with the GOP very likely retaking the congressional majority Graves very well could end up as chairman of House Transportation.

If he gets that, Garret Graves isn’t running for governor in 2023. He’s going to be too busy.

The thing to understand about Graves is this: whether he’ll admit it openly or not, what floats his boat is the idea that the feds have hurt Louisiana more than helped – from what the Army Corps of Engineers has done to the Mississippi River by leveeing it to its mouth, from long neglect of projects like Morganza To The Gulf and the Comite River Diversion Canal, and from the awful state and design of our highways – and his mission in life is to claw as much money out of Washington as he can get in recompense.

He’s not a big culture-war guy, he’s less torqued up about things like the 2020 presidential election, he’s not all that passionate about partisan political warfare. For Garret Graves a lot of that stuff is a big, fat “meh.” What wakes him up in the morning is building brick-and-mortar stuff.

So put him in charge of the House Transportation Committee and Garret Graves is all of a sudden in a position to fix Louisiana’s roads, to dredge the Mississippi and put the dredge spoil to work rebuilding our marshlands, to get the drainage canals right, and so on.

But if Graves doesn’t get that committee chairmanship?

The thing to understand is that all of the not-all-that-conservative types in Baton Rouge, the Baton Rouge Area Foundation gang who followed Jay Dardenne into John Bel Edwards’ camp, love them some Garret Graves.

They don’t really love John Schroder. They really don’t love Jeff Landry – they don’t like his Cajun accent, they can’t stand the fact that Landry is at the forefront of all the big Attorney General fights in all the courts, they don’t like Landry’s combative stance against Edwards and the other Democrats. Those guys have been pining for Garret Graves for years. They wanted him to run for governor back in 2019, when Graves had zero interest in running.

Will he have zero interest next year? If he’s not the chair of House Transportation? Hmmm.

Graves talks a very good game. He, Steve Scalise, Mike Johnson and John Kennedy are the four best messengers in all of Louisiana politics at present. Graves can explain an issue as well as anybody, and he has skill at boiling things down so they don’t sound partisan.

If he got into the race he would make Billy Nungesser completely irrelevant in no time flat. Nungesser would probably have to recalibrate his electoral ambitions and run for his current job again. That would be a disaster for House Speaker Clay Schexnayder, who Alford reported last week is openly advertising his interest in running for Lt. Governor.

Graves would eat into Schroder’s action as well, because lots of Schroder’s conservatives like Garret Graves. He isn’t a wear-it-on-your-sleeve conservative, but he talks and thinks like a conservative does. Graves thinks government absolutely sucks at what it does, and that’s the essence of what a modern conservative believes. But Schroder would still have some strength in the New Orleans area, particularly if Nungesser was out of the race.

Landry’s hard-core supporters probably wouldn’t abandon him if Graves got into the race. Some of Landry’s base, particularly in the River Parishes and down the bayou in Houma/Thibodaux/Morgan City, would be torn a little because they like Graves as well. In Acadiana that isn’t really true as much – their exposure to Garret Graves hasn’t been extensive.

But one thing not in Graves’ favor is that he doesn’t do endorsements. He stays out of all of that, which is defensible, but what it means is he doesn’t have a political network. Landry and Schroder, and to an extent Nungesser, have all done a good bit of work building alliances with local pols, state representatives, activists and so on. Graves doesn’t really have that, because he’s stayed out of that stuff. We’re told the redistricting battle set him at odds a bit with Johnson and Clay Higgins and even Scalise a little.

Would that play against him? It’s hard to say. Republican politics in Louisiana isn’t really machine politics, not like Democrat politics is, but having some machinery laying around is still fairly useful.

Could Landry win a runoff against Graves? It isn’t a good matchup for him.

Could Landry make the runoff against a Democrat if Graves was in the race? Yes, he could. Could Graves? Also, yes. Could somebody else? It would need to be a hell of a campaign, but maybe.

Could a white Democrat get into the runoff if Garret Graves ran? Not a chance. With or without a black Democrat in the race, that’s a non-starter – white Democrats would vote for Graves because they’d swoon over all the infrastructure talk. It would be enough for them. And the white Democrat power structure, which is mostly based in Baton Rouge because those people hang around the Capitol all day, are his constituents. They see him as somebody they can do business with.

We wouldn’t say that Garret Graves would be the immediate frontrunner if he were to run for governor in 2023. We would say he would be a major candidate, he’d be very well funded, he’d have a very competitive message and he’d render obsolete some of the current names being thrown around.

And if he’s not the chair of the House Transportation Committee by this time next year, it wouldn’t be a huge surprise if Garret Graves’ hat was in the ring.