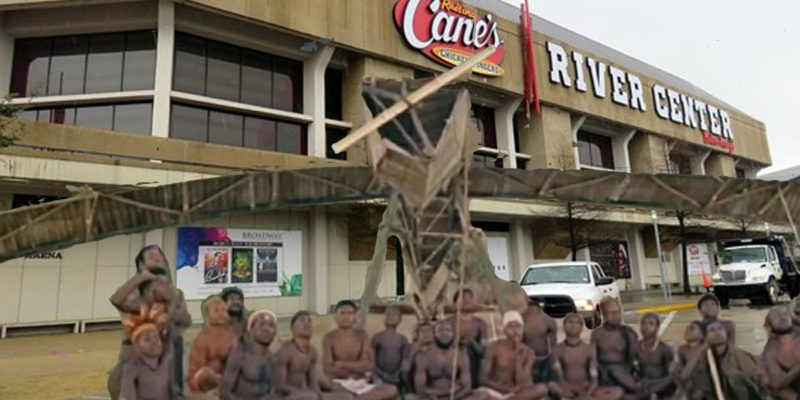 Baton Rouge is a city which runs on “studies.” It isn’t a city that runs on action. At least, certainly not in the public sector.

They’ve been doing “studies” on infrastructure in Baton Rouge for decades without actually building it. And the city-parish government pisses away millions of dollars on “studies” of things which everybody knows will never get done.

The best and easiest example of this is the millions of dollars spent and planned on the manifestly stupid idea of a passenger train between Baton Rouge and New Orleans. If that ever becomes a reality it will be a very brief one, because nobody will ride that rail line and it’ll shortly shut down, drowning in a sea of red ink.

You don’t need a study to prove that. You just need common sense. If the rail line can’t get you from Baton Rouge to New Orleans or vice versa any quicker than you can drive, and if it isn’t cheaper than a quarter of a tank of gas to ride that train, and if you’ve got to spend an hour exposed to the kind of people who commonly take public transportation on that train, you can conclude nobody will ride that train.

But the people who keep trying to inflict that rail line on us continuously dole out money to consultants to do “studies” and create designs for things like train stations in places like Gonzales and Gramercy and LaPlace, because there’s grant money to be pissed away and a campaign contribution pump to be primed.

And now we have another perfect example, courtesy of the Baton Rouge Business Report…

Visit Baton Rouge plans to hire a consultant to see how the Raising Cane’s River Center stacks up to comparable facilities in other regions and states and evaluate possible improvements.

One key issue: Figuring out counts as a comparable situation for Baton Rouge, a midsized market only an hour from New Orleans.

A similar study planned in 2020 amid concerns the River Center was losing performances to similar venues in New Orleans, Shreveport and Lafayette was scrapped when the COVID-19 pandemic hit.

The River Center reopened its performing arts theater this year after an $18 million renovation. Former Mayor Kip Holden had hoped to include River Center expansion in a failed bond package, though a smaller, $19 million upgrade accommodated the U.S. Bowling Congress’ arrival in 2012.

The purpose of the study isn’t trying to figure out how to attract more events to the River Center. You don’t need a study for that. What you need is a sale – drop the price for events, and you’ll fill up the schedule. Either that or hire better sales people and get aggressive about recruiting clients to book events in the facility. Private event venues do this all the time, and the ones who are good at it are always busy (the ones who don’t go broke, like the River Center would be if your tax dollars weren’t propping it up).

Instead, the study is aimed at finding out how to spend more money on facilities which sit empty almost constantly. Between the River Center arena, its Theater for the Performing Arts and its ballroom there are all of six events planned in the entire month of May, and just two in June and two in July. That’s according to the event schedule on the River Center’s website.

Compare that to the Gulf Coast Coliseum in Biloxi, which has 18 events scheduled for the month of May. Sure, more than half of those are high school graduations, but assumedly kids graduate high school in Baton Rouge as well. The River Center never bothered to chase down graduation ceremony business to fill up the ballroom in May? And some of those events in Biloxi are multiple-day items, like the Showstoppers Dance Convention and the 61St Annual MNA Coin & Currency Show.

The River Center arena isn’t a terrible place to see a concert. They don’t need more premium seating or better concessions to make the place acceptable. The facility isn’t the problem.

The problem is the idea that Baton Rouge has to have a world-class event venue downtown. And that our tax dollars need to be spent studying how to fill up a facility Baton Rouge doesn’t really need in the first place.

Practically right next door to the River Center is the Shaw Center, which is a private facility with offices, a rooftop restaurant and its own theater. The Manship Theater at the Shaw Center has a dozen events on its schedule for May.

How about L’Auberge Casino on the far southwestern part of town? It has four events scheduled in May. And its Event Center is a ballroom they bring in temporary seating for when a concert gets booked. They didn’t need to spend $18 million renovating that place to get it open for more business than the River Center gets.

What does that tell you? It tells you the River Center DOESN’T NEED a Theater for the Performing Arts. But that didn’t stop the Powers That Be from blowing $18 million on a renovation and reopening of that facility. Which will sit empty almost nonstop.

Do you know what cargo cult economics is? It perfectly describes the mentality of the public sector crowd in this town.

This is a cargo cult…

One imagines the natives probably delegated some of their people to do a “study” on why their fake plane and control tower didn’t produce giant airdrops full of goodies as well.

Cargo cults came about in the South Pacific during World War II, because while the U.S. and Japan were fighting that war, planes would fly over these primitive islands and drop crates of supplies on the natives in hopes of currying their favor and smoothing the way for air and naval bases to be used in the war. But the natives had zero clue what was going on, and like the people in that video they thought those airdrops were gifts from the gods.

So they built mockups of the modern societies which produced those goods believing that if they provided the accoutrements of prosperity they’d make it real.

Not knowing that a crate full of candy bars or tools or pamphlets or whatever doesn’t come from the gods but rather it’s the product of centuries of intellectual and economic development. The cargo cult doesn’t have a clue about any of that; it skips thousands of steps and just asks for the benefits. It builds what it thinks are signals of progress and then waits, in vain, for that progress to come.

And that’s what you have with Baton Rouge’s public sector.

For years they’d run a junket to a more prosperous city somewhere, like Austin or Charlotte or Phoenix, and then come back and tout the necessity of a “first-class bus system” or a jacked-up River Center, or a passenger rail line or a zoo.

When what those things represent is the byproduct of prosperity and not its cause.

They have a great public transit system in Atlanta because there’s a need for one. The highways there are choked with cars because it’s a huge, vibrant place with millions of people living there. People use that system because it’s easier than driving to work. In Baton Rouge there’s lousy traffic because the highway system is pitifully underdeveloped, not because the traffic counts are so high. The fact that the Powers That Be did everything they could to drag all the state workers downtown in hopes of making downtown Baton Rouge a vibrant place didn’t help much; those state workers still bought places in the suburbs, so now they’re commuting downtown from Denham Springs or Central when they could have been commuting to some building on Essen Lane or Florida Boulevard.

So trying to build a great public transit system in Baton Rouge gets you empty buses and CEO’s who steal all the bus system’s money.

You get a zoo nobody goes to where the animals drop dead with peculiar regularity.

And a River Center which can’t book events, with a management team spending piles of cash studying how to spend even more money in a futile effort to make itself relevant.

If Baton Rouge ever spent some time building a business community that didn’t suck, or an entrepreneurial environment worth having, or an industrial base that wasn’t under constant attack by stupid social justice warriors or environmentalist nuts, we wouldn’t need cargo cult economics.

And we wouldn’t need so many “studies” trying to figure out why it’s not working for us.

Interested in more news from Louisiana? We've got you covered! See More Louisiana News
Previous Article CROUERE: End The Mask Madness
Next Article A Free Nation Thanks You, Judge Mizelle