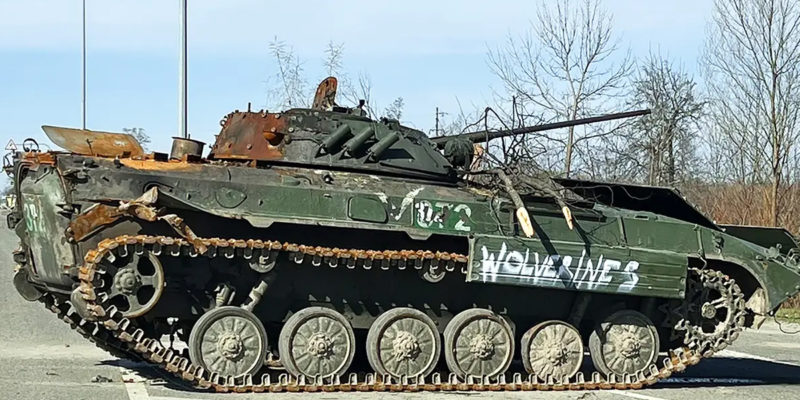 The Cold War-era movie Red Dawn was trashed by critics (mostly liberals) for being a hyper-violent, jingoistic film that preyed on people’s paranoia about Communism and the Soviet Union at a time when Ronald Reagan was declaring the USSR an “evil empire” to the horrified shrieks of the Democrats.

New York Times reviewer Vincent Canby smugly declared that the film “exposes for all to see the cockeyed nightmares of those on the lunatic fringe, the self-styled patriots who might even embarrass the members of the John Birch Society.”

Many years later in John Cusack’s farce about a jacuzzi that sends him and his middle-aged loser contemporaries back to the 1980s, the movie’s “villains” are portrayed as obsessed with Red Dawn.

And yet in the war to preserve their country Ukrainian patriots have borrowed an element from the movie in their own very real battle against Russian invaders, painting “Wolverines” (the squad of high school guerillas played by Patrick Swayze, the tiger-blooded Charlie Sheen, Jennifer “Nobody Puts Baby in a Gulag” Grey, and Lea Thompson) on a destroyed Russian tank.

Never underestimate the reach and power of American popular culture even from four decades ago.

The Ukrainians are locked in a battle for their very existence as a nation and if you up don’t believe me, just ask Russian President Vladimir Putin who plainly stated as much back in February.

And they’re fighting for their very lives. When retreating Russian forces failed in their objective to take Kiev and other strategic points in the central areas they left behind the bodies of hundreds of massacred civilians, reminiscent of Russia’s past bloody history in Ukraine.

The Holodomor’s death toll is estimated in excess of three million for this coordinated man-made terror starvation campaign intended to both further integrate the country into the Communist economic system and to suppress Ukrainian nationalism.

There are other countries that have similar experiences under Soviet domination, most infamously the Katyn massacre of Polish military and government leadership, the stuff that doesn’t get taught in history class that every American student should learn about socialism.

Moscow forever lost all rights to claim Ukraine as a part of whatever official name they operated under  regardless of the national flag flapping above the Kremlin’s imposing walls.

The West should continue tightening the sanction screws on Russia. The ruble is currently trading at 81 to the dollar and while Russia has not known western level prosperity, creating additional economic discomfort won’t help Putin’s reelection hopes in 2024 regardless of his alleged surge in popularity in Russia.

Eventually the knee-jerk euphoria fades as the death toll climbs and the hard times get harder.

Reassurances of support must be made to NATO members through the deployment of defensive weapon systems and the presence of American military personnel.

A clear message must be sent to Putin without equivocation: Moscow is never getting the free peoples of the Baltics nor Eastern Europe back under their control.

Soviet T-34s rolled on to the streets of Budapest in 1956 and Warsaw Pact T-54s swept into Czechoslovakia in 1968; ensuring Ukraine remains intact will stop history from repeating itself.

Putin and the Russian state must be made to understand that they will be viewed and treated as a rogue state until Russian units are completely removed from Ukrainian territory.

Finally the Ukrainian government should be sent a supply of materiel to support their resistance. If the United States could support the Contras then we should back the heroes of Kiev, Mariupol, and countless other cities that have not yielded to superior numbers and firepower.

NATO must demonstrate the backbone that Chamberlain and Daladier lacked at Munich.

Russia is a far weaker military power than it projects and will not risk inviting a war against a unified front.

And Putin won’t risk his position on such a game knowing that there is no shortage of opportunists with military rank lurking about the Kremlin.

The Biden Administration should immediately reverse its domestic anti-oil policies to drive down the price and deprive Moscow of its petro-cash.

To simply chalk up Russian military occupation across an internationally recognized border as a mere fait accompli will only lead to additional incursions in the future. And further provocations by unrelated parties watching this play out with great interest.

Don’t think the Biden-orchestrated panicked flight from Afghanistan wasn’t noted in Moscow and factored into Putin’s calculations regarding his move on Ukraine.

The old ways of moving boundaries by force of arms in the Western world must be discredited via severe economic and diplomatic consequences.

The Russian invasion of eastern Ukraine might not be “our war” to fight but allowing Putin to bulldoze smaller neighboring countries with impunity brings matters increasingly closer to a point where we will find ourselves in one not of our choosing.