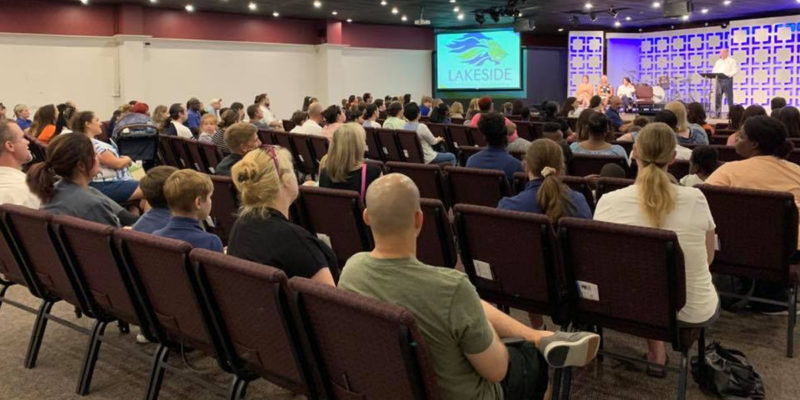 Editor’s Note: this is a guest post from John Raymond, a pastor in Slidell and the headmaster at Lakeside Christian Academy, who was arrested last week after a highly-publicized controversy surrounding his taping shut the mouths of a handful of disruptive students. Raymond posted a statement telling his side of the story; here it is.

My mother always told me, “Truth out of context is a lie, and half-truths are worse than lies; but in the absence of the truth, people will believe anything.” So, here is the whole truth.

On Thursday afternoon, March 17th, our 7th grade teacher was distraught and in tears and ready to terminate her employment over the repeated disruptive behavior of her students. I have had to address this class multiple times since the beginning of the school year for behavioral problems, particularly with three of the five students involved in this incident who consistently showed complete disregard for the teacher’s authority.

The last class of the day was already in session and the students had been waiting in the office lobby for me to arrive for about fifteen minutes. The principal told me that, as headmaster and disciplinarian, I had to do something about the students that were creating such a disturbance that the teacher was unable to teach. I spoke to the teacher, and with her eyes swollen from crying and her voice trembling, she explained to me that the main problem was the students’ incessant talking even after repeatedly being asked to stop.

One student in particular was the catalyst, whom when asked to stop talking, responded to the teacher by saying, “I’m not going to let any teacher talk to me like that.” The day after this incident, the teacher once again came to the office sobbing and ready to quit because of this same student. He received a two-page disciplinary write up for additional violations that day and never returned to school.

After speaking with the teacher, I led the students to the upstairs hallway and explained to them that we were not going to tolerate this continued disruptive behavior for the rest of the school year. At no point were the students ever in my office. I told them that they could not disrespect the teacher and cause her emotional grief, nor would I allow them to rob their classmates of an effective learning environment. I told them, “I love you, but this has been going on all year and it has to stop immediately.” I wanted to give them another chance. At this time, I pulled out a roll of clear Scotch packing tape and said, “I’m going to give you a choice. We can either go downstairs and call your parents and you can wait in the lobby to be suspended, or you can get tape on your mouth and learn how to be quiet during class.”

The students all chose tape and I pulled off one piece at a time and carefully placed it over their mouths making sure that it did not touch their nose or interfere with their breathing. At no time was tape wrapped around any student’s head.

We walked downstairs and I escorted them to their final class, which was now about halfway over. When the students entered the room, I said to the class, “Disrupting your class and disrespecting your teacher is not allowed.” Then I said, “I’m not going to call your parents, but you can tell your parents and if they have any questions, they can call me.” That evening, one of the parents called me and we discussed the matter. She was understanding and supportive and said she knows I care about her children, and they love attending Lakeside. Her son has since been attending school as usual.

I then went to the principal’s office and told her that the students chose to have tape over their mouths rather than suspension. The principal said, “You put tape over their mouths?” I said, “Yes, that’s the choice they made instead of calling their parents and being suspended.” And she said, “I’m not very comfortable with that.” And I said, “Well they’re not in pain, so let them sit it out for about ten minutes to learn their lesson.” She said, “How about two minutes?” I said, “That’s fine with me.”

Within a couple of minutes, we walked about fifteen feet to the class they were in, called the students out of the classroom, and the principal and I both gently took the tape off. None of the students were harmed in any way from the tape being put on or taken off. Never did any student indicate they had experienced any discomfort. In fact, one teacher witnessed the student that caused the most trouble actually laughing in the hall while still wearing the tape.

I asked each one of them individually, “Do you understand that you cannot disrupt the class?” And one-by-one they each said, “Yes sir,” and then went back to class as normal and finished the final period, which was over at 2:45. The tape could not have been applied for more than eight to ten minutes total from the time it was put on until it was taken off.

We have a zero-tolerance bully policy at Lakeside. This means students cannot bully each other or bully the teachers. We are serious about protecting both our students and our teachers.

Of the five teenage boys involved, the parents of three of them are pressing charges for “cruelty to juveniles.” The other two students have been attending school as usual. Their parents are completely supportive of the discipline that took place. In fact, another one of these parents has since applied to work at our school and is now on staff.

About two weeks later, a complaint was filed and I left a voice message for Police Chief Randy Fandal asking if a detective could call me so that I could give a statement. Unfortunately, my call was never returned, and I was not contacted until after the arrest warrant had been issued two days later.

We love all of our students at Lakeside and strive to maintain a safe and effective learning environment. Building character in teenage boys can be difficult. These students were given a choice between suspension and the temporary tape. They were never in any physical pain. Their breathing was never impaired. The tape was never wrapped around their heads. And it was off in under ten minutes. No student was ever treated with cruelty or harmed in any way.

As founder and headmaster of Lakeside Christian Academy, I wish to thank all of our Lakeside faculty, families, and students, as well as everyone who is sharing encouragement, support, and prayers at this time. We remain fully committed to our vision and values.