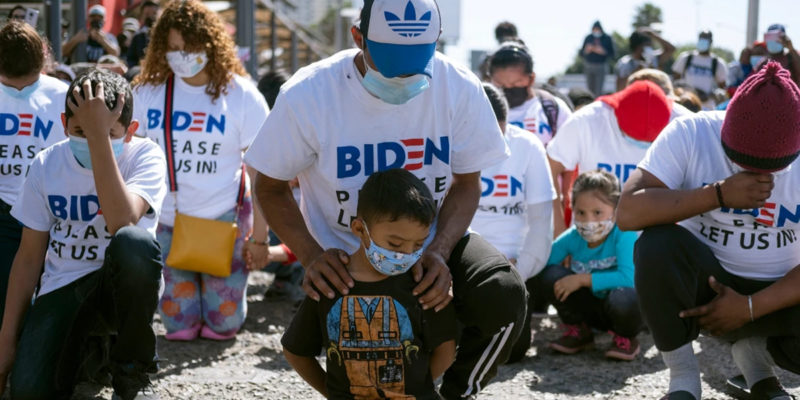 One of the things that I find so amazing is that the Democrat party leadership lacks any common sense. As much as I like to talk about Pendejoe, it seems like elected Democrats across the nation are simply part of the problem.

We can say on some issues there are Democrats who are opposed to Biden and they speak up, every once in a while… but that’s all they do, is speak up. What they could do is refuse to vote for any of Pendejoe’s legislation until they get control over the flow of illegal immigrants crossing our border. They don’t. They only speak out, write letters, and say they are against it, but it’s not a priority for them.

They talk the talk, but choose to help forward far-left extremist agenda items over the security of our border.

Another solution, if these Democrats want to distance themselves from this poisonous administration, is to push an independent council investigation on Hunter Biden’s laptop as a response to the lack of acknowledgement that the border needs to be secure. Especially if they believe there is no wrongdoing, it would give Biden an unnecessary headache, much like the border is an unnecessary headache for those elected Democrats. But if they thought there was a possibility that Hunter is guilty of crimes and Pendejoe is wrapped up in it, they would absolutely get results.

The bottom line is, the Democrat legislators, in Congress and at the state level, carry more weight than what they are pretending. If they want Biden to solve the border crisis, they have options. The reality is, they want to talk out of one side of their mouth while the border bleeds.

To that end, it’s a party that’s led by an administration who clearly favors China over our own people. It’s almost as if China has invested heavily into Pendejoe’s administration and it’s payoff time. A common-sense Democrat would be concerned that Hunter’s laptop possibly shows that Pendejoe has indeed sold out the future of the Democrat party for their own financial gain. But it’s a party without common sense and therefore it’s better for average Democrats to suffer financially while the big guy gets all the dough.

The Left obsesses over the most irrelevant of things. The reality in life is nobody cares about your race, your gender, or your sexuality. What people care about is your character and your ability to do your job. If you take care your job and keep your character in check, people will like you. It’s that simple. Sure, there are a few childish people who do make that an issue, but the vast majority of people simply don’t care.

It’s common sense that if you’re an adult and you have an obsession with talking to kindergarten students about sex and sexuality, you’re a pervert and you need mental health intervention. It does not matter if you’re trying to talk to little children about straight sex, transgenderism, or bestiality. You’re a problem and nobody should allow you around their children. Yet Mayor Eric Adams invites such people to move to New York, calling on them to fill their pockets with candy before they drive their van up North. Maybe that’s why Eric Adams has little children wearing masks like mini-Gimps. It’s the kind of people he wants to attract to New York.

Common sense leaders want to attract people who will open up businesses, contribute to the health and wellness as well as to the public safety. Yet too many city and state Democrats around the nation show no desire to attract such people, in fact, their actions actively invite those people to leave. It’s common sense that there is nothing compassionate about people living on the side of the street, living in tents surrounded by filth. It’s their misfortune. Yet Democrats leading communities measure their compassion by the largess of their respective homeless communities. The more homeless they have, the more the pat themselves on the back.

They see the productive citizen as somebody they own. That their elected position is meant for them to take what they wish from who they want. Take for example PendejA Oh Si and her $174,000 congressional salary. A responsible American with that kind of salary would gladly pay off their student debt. As for PendejA? She expects people who either paid off their own student debt and people who never went to college to suck it up and pay for her college debt. Common sense would tell you that other people don’t owe you for the debt you choose to incur, but the squad proudly demands that you pay for their debts.

Our colleges and universities are filling up with students who are more fit for a nursery than the labor force. They throw temper tantrums like five-year-olds until they get their way rather than show they are mature enough to enter the workforce. This is unhealthy for both society and the students yet too many people in the proper position of power do nothing to stop it. It’s common sense to not send your children to schools that condone such behavior, lest you want your own child acting in such a way.

Too many others are filling positions on the local level before they move up. This upcoming election is the opportunity to weed them out before they get started. The truth is, if they are running for office on the local they most likely agree with most of what their party stands for. So whether it’s on the school board, city council, or state legislature, get involved and do your do diligence. Local elections matter on all levels.