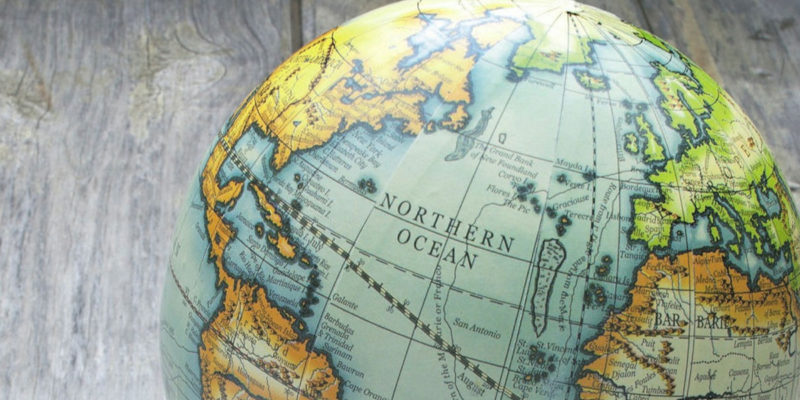 Once upon a time, there was a wee bit of a diplomatic arrangement called the Monroe Doctrine, one of whose clauses went something like this:  ‘In exchange for the European powers’ abstaining from Latin American affairs, the United States would abstain from European disputes.’

That arrangement has gone straight out the window with US interference in the Ukraine, and the spirit of the thing (that cultures/nations have spheres of influence that ought to be free from outside meddling) is also being rejected by the US vis-à-vis Taiwan:

Just as the the United States and its allies created an existential threat to Russia through the transformation of Ukraine into a highly militarized proxy of Western military power – so too is such a threat being deliberately and systematically created on the island of Taiwan vis-a-vis Beijing.

From 2014 onward, the United State had installed into power regimes in both Ukraine and Taiwan disrupting the status quo both territories had with Russia and China respectively.

While much attention in 2014 was focused on Nazi militants seizing power in Kiev, the US-sponsored “Sunflower movement” likewise paved the way for a US-backed political order to take power in Taipei.

While US military training in Ukraine was done more or less openly, US forces placed in Taiwan, a territory the US acknowledges is Chinese or acknowledges is perceived as being Chinese by Beijing, was done relatively quietly.

Such incendiary policies are the result of the Straussians, who dream of US global hegemony that lasts forever and who are willing to use force to see that it comes about.  Unfortunately, they never stopped to think about the consequences of their actions.  But they are here, and more are coming; and regular folks across the States and in many other countries will soon feel the full weight of them:

Medvedev said “hellish” Western sanctions not only have failed to cripple Russia, but are instead “returning to the West like a boomerang.” Confidence in reserve currencies is “fading like the morning mist”, and ditching the US dollar and the euro is not unrealistic anymore: “The era of regional currencies is coming.”

After all, he added, “no matter if they want it or not, they’ll have to negotiate a new financial order (…) And the decisive voice will then be with those countries that have a strong and advanced economy, healthy public finances and a reliable monetary system.”

The sanctions against Russia have already led to sky-high fuel prices; the same will quickly come for food staples like crackers, oats, bread, corn, etc., and other essentials as well.  The end of the US dollar as the world’s reserve currency will bring even more far-reaching effects here and abroad.

And if the insane policy makers in the Biden Administration succeed in finding a reason to levy similar sanctions against China over Taiwan – well, let’s just say that a lot of pampered Americans won’t be too happy with their new economic situation.

But the fallout is happening elsewhere in our hemisphere as well.  The supposed beneficiaries of the Monroe Doctrine, the nations of Latin America, are ready to break with the US over their latest demand to ‘side with us, or else’:

But perhaps the most underreported, and indeed most dangerous defections from U.S. dominance have taken place in Latin America.  Mexico’s president hails from the Party of the Democratic Revolution and has been celebrated for being the first truly indigenous leader of the tenth most populous country in the world (close to 130 million people).  You would think a man with such lefty credentials would be positively thrilled to work with a Democrat after four years of Trump…but you would be wrong.

President Andrés Manuel López Obrador announced soon after the imposition of sanctions that Mexico would not partake in them: “We are not going to take any sort of economic reprisal because we want to have good relations with all the governments in the world.”

Let us just say it is less than comforting that we have a 1,900-mile open border with a country that just announced that it wants good relations with a Russian government the U.S. has sworn publicly to crush.

The other powerhouse south of the border is Brazil, where president Bolsonaro is not playing ball with Joe Biden, either.  Besides mocking Zelensky’s status as a comedian, Bolsonaro said Brazil needs Russian partnership to support its agribusiness and feed its population of over 200 million people.  As Reuters reported, “[h]e added that he was against any sanctions that could bring negative repercussions for Brazil, citing Russian fertilizers which are crucial for the country’s giant agribusiness sector.”

We reap what we sow, folks.  When we don’t uphold our end of agreements like the Monroe Doctrine, not expanding NATO, etc., some unpleasant consequences are going to follow eventually.  Thus, all the virtue-signalers, from Samsung’s renamed phone to the representatives of the North Carolina House who voted unanimously for a resolution in support of the Ukraine, may look mighty foolish in the not-too-distant future.

Nevertheless, it is in those very State legislatures, and governors’ offices and judicial courts, where we stand the best chance of putting into place some policies to help us weather the storms that are coming because of the lunatics on the Potomac.

Utah is laying the foundation for a gold-backed currency; Texas has her bullion depository.  They will be well-positioned if/when the fiat Federal Reserve dollar’s value collapses.  Louisiana could join them by issuing a currency backed by our oil and gas products.

Gov. DeSantis in Florida continues to show great leadership in combatting the influence of woke corporations in his State.  In 2021, it was laws to put an end to deplatforming/censorship by Big Tech; this year it is laws to check the power of the creepy perverts at Disney who want to draw little kids into the LGBT world.  Via Fox News:

Florida’s Republican Gov. Ron DeSantis addressed on Thursday the suggestion of repealing a 55-year-old state law that allows Disney to effectively govern itself on the grounds of Walt Disney World, following the company’s public opposition to a controversial parental rights law in Florida.

“What I would say as a matter of first principle is I don’t support special privileges in law just because a company is powerful and they’ve been able to wield a lot of power,” DeSantis said during a press conference in West Palm Beach, Florida on Thursday.

DeSantis said that Disney has “lost a lot of the pull that they used to have” over the company’s reaction to the parental rights law and said he thinks that’s a “good thing for our state because the state should be governed by the best interest of the people.”

“I would say any special privileges that are in law I would like to get rid of generally,” DeSantis added. “I think in this particular case with Disney, I just don’t think you have very many people in the legislature anymore who are going to be able to defend a lot of what has been done over many years to really have them almost govern themselves in some of these things. That was probably never appropriate to start, but is certainly not appropriate now at this point.”

We need much more of this sort of thing if normal Christian folks have any intention of regaining control of the influential institutions of society that are currently run by Leftists of various sorts – not to mention the further protection of young children from Big Pharma’s covid shots that Biden and Co. want to stab into their bodies despite warnings all over the place about harmful reactions they will suffer now and in the future.

The actions of individuals and families outside of government also have a role to play, as we could weaken the woke institutions by not supporting them financially.  Instead of Disney movies, seek out films like the recently released Man of God, recounting the life of the great wonderworker of the 20th century St. Nektarios of Aegina, which has won awards all over the world and continues to be reviewed positively.

The harvest of tares will be plentiful for quite some time because of our bad decisions in the past.  Yet there is still a little time left to plant good seed; but not much.  Let’s do good work while we can, following the exhortation of the Holy Apostle Paul (Galatians 6:7-10):

Do not be deceived; God is not mocked, for whatever a man sows, that he will also reap. For he who sows to his own flesh will from the flesh reap corruption; but he who sows to the Spirit will from the Spirit reap eternal life. And let us not grow weary in well-doing, for in due season we shall reap, if we do not lose heart. So then, as we have opportunity, let us do good to all men, and especially to those who are of the household of faith.

And of our Lord Jesus Christ Himself (St. John’s Gospel 9:4):

We must work the works of him who sent me, while it is day; night comes, when no one can work.