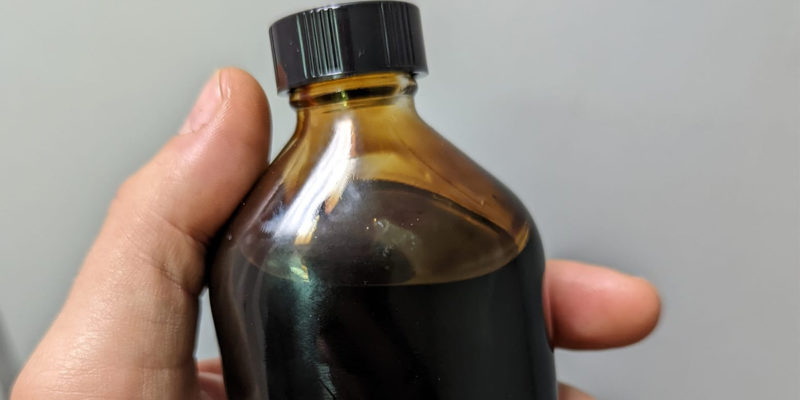 Editor’s Note: the following is from a Facebook post by Lance Geist, an offshore oil worker plying his trade on one of the platforms in the Gulf of Mexico. It’s picking up lots of shares and we thought we’d help spread its message – containing facts people absolutely should be aware of while we’re paying huge prices at the gas pump and our economy teeters on the edge of a steep recession.

I hold in my hand a 140-milliliter sample of Louisiana light (sweet) crude oil. I collected it myself from a process separator aboard the production facility I work on in the Gulf of Mexico. It may not seem like much to you, but it really is a very remarkable substance! It’s more than 50 million years old, and came from an oil reservoir that’s almost 20,000 feet underground. Very soon, it will travel hundreds, or maybe even thousands, of miles on its journey to becoming one of the many products that crude oil is refined into. It has a dark earthy brown color, is slightly less viscous than tap water, tastes worse than it smells, and is the life-blood of the world economy. Believe it or don’t, but this sample represents the single most valuable commodity in existence. Without it, nearly every facet of modern civilization stops. Immediately.

This sample contains about .0028% of my facility’s daily crude oil output, but is less than four hundred-millionths of 1% of the United States’ daily crude oil consumption. It’s also an infinitely small amount when compared to the 4+ trillion barrels of known domestic crude oil reserves. That means there’s a frikken’ buttload of crude oil, right here in the good ol’ US of A! It’s enough to sustain us for more than 400 years, which is way longer than we’ll need sustaining for because we’ll probably be extinct by then. Ok, maybe not. But maybe so. Who knows? One thing is certain though; there’s no shortage of domestic crude oil, and more is being discovered every day. So, we’ll likely still be discovering new oil reserves long after we’re extinct. Maybe not. Who knows.

Anyway, so what’s the point of this? Why have I told you this? It’s to expose you to the truth about crude oil and the oil industry, because you’ve been lied to. Not by me, though. You’ve been lied to by the phony President and his phony cronies, but I want to set the record straight. I’m going to tell you the truth, so pay attention.

1. There is enough recoverable crude oil within the continental US to supply current and projected future demand for 400+ years, and that’s just the oil we know about. It doesn’t account for future discoveries. That’s a fact, jack.

2. We do not need to import a SINGLE DROP of foreign crude oil. The domestic oil industry can easily meet, and even surpass, domestic demand. We’ve done it before, and we can do it again. That’s a fact, jack.

5. We import foreign oil from countries that drill and produce it much cheaper than we’re able to because they do not implement all of the environmental safeguards that we do. Their methods are FAR more destructive to the environment than ours are. That’s a fact, jack.

6. Every year, the federal government leases tracts of land to oil companies so they can explore on it for oil. If enough oil is found during exploration, the company can then apply for a drilling permit which allows them to drill a well. If no oil is found during exploration, or if the amount found is not enough to be profitable the lease expires without ever being drilled on. There there are leases that are active, but not being drilled on, does NOT mean that oil companies are being lazy, or are trying to keep the oil for themselves, etc. It means they’ve either explored the lease for oil and found nothing, or found oil but it’s not enough to justify drilling for. That’s a fact, jack.

7. It’s not Russia’s fault, or China’s fault, or Ukraine, or India, or Venezuela, or Iran, or Bangladesh, or any other countries’ fault as to why everything is so expensive right now. It’s Joe Biden’s fault, because he is suppressing the domestic oil industry for political gain. That’s a fact, jack.

You see…I don’t take it kindly when he and his cohorts go on national TV and bald-faced lie to the American public about the oil industry. I don’t appreciate when my hard work and dedication is eroded by corrupt, self-serving politicians who don’t know jack shit about this trade. It doesn’t sit right with me, when they promote an unsustainable alternative energy policy that benefits themselves and their corrupt business partners while leaving people like me and you with barely a pot to piss in. It all kind-of rubs me the wrong way, you know? Especially since pretty much EVERYTHING depends on crude oil…but you might not know that if you believe the lies that are being told about oil and the oil industry.

If you’ve made it this far, congratulations! You’re now more knowledgeable about the oil industry than most of our politicians are. So what should you do with all of this new knowledge? It just so happens that I’ve got a great suggestion for you! The next time they’re on TV lying to you about the oil industry to try and cover their asses, remember what you’ve learned here…and remember it again when it comes time to vote.