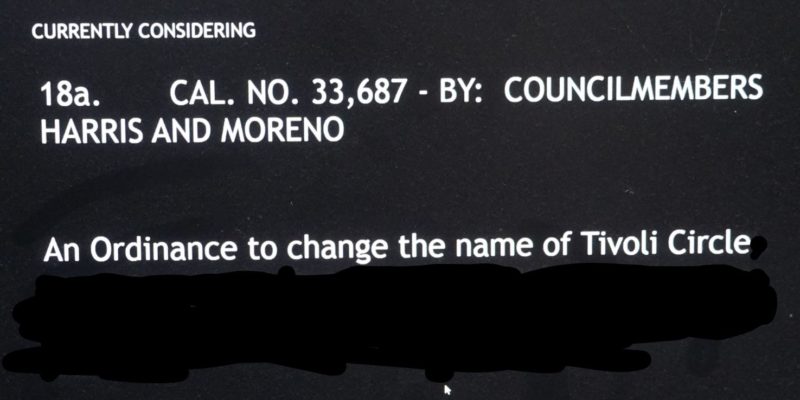 On the same day President Obama spoke at Stanford University on the dangers of misinformation the New Orleans City Council, through the office of one of its members Lesli Harris, issued a propaganda press release to deflect from the council’s retaliation to the Italian community along with missed opportunities to honor US Military and increase New Orleans tourism.

Most local and national media were complicate in reporting the misinformation. Some tried to make sense of the improperly written Ordinance 33,687.  New Orleans City Council Ordinance 33,687 clearly states Tivoli Circle is being renamed numerous times. The slide on the monitor at the City Council meeting read: “An Ordinance to change the name of Tivoli Circle….”  However, Harris’ Press Release stated that she made a motion to rename Lee Circle, which is the misinformation the press used.

In reality, she was making a motion to rename Tivoli Place or Place du Tivoli as it as named in 1807 by city planner Barthelemy Lafon. The concept was Tivoli Place was the park and Tivoli Circle was the street. Tivoli Gardens is located approximately 30 miles from Rome and was established around 300 AD. Tivoli Place would serve as New Orleans’ gateway to the Garden District.

The 2015 Ordinance to remove the Lee statue incorrectly stated the statue was located on Tivoli Circle, when it should have read the statue was located on Tivoli Place.  At the City Council meeting, Harris and other council member stated they were renaming Tivoli Circle to Harmony Circle and keep the street as Tivoli Circle. This error caused confusion as the council and media tried to explain what the future holds with New Orleans to have to “Circles” at the same spot.

Since 2018, the Italian Community had proposed making Tivoli Place a park to honor US Military and work with both the National World War II Museum and the American Battlefields Commission to fund the development of the park. Plans included a Tuskegee Airman and Navajo Code Talker statues.

Harmony was suggested as a name for the piece of land located next to Duncan Plaza at City Hall.

Harris is the third council member is the last year to slight New Orleans’ Italian community with re-naming and misinformation.  Previously Council Member Helena Moreno moved to discontinue Columbus Day observance in New Orleans. Columbus Day observance was created by President Harrison as a way to honor contributions of Italian immigrants after the New Orleans city council in 1890 funded with $15,000.00 the Committee of Fifty. Part of the money was used to buy Winchester Rifles to massacre Italians in 1891.

In 2019, Mayor LaToya Cantrell issued an official apology for that event and recognized the Italian Community’s contributions to New Orleans.

In 2021, Council Member Kristen Palmer moved to remove the Washington Artillery monument along the Mississippi River near the Moon and Mitch Landrieu monument. Palmer claimed the monument, which honors the New Orleans national guard was promoting White Supremacy. The monument was erected in 1976 by Moon Landrieu and renovated in 2016 by Mitch Landrieu. It is at the site where Francesco de Pinedo landed a seaplane in March 1927 from Rome, two months before Charles Lindbergh crossed the Atlantic.  The City Council declined to rename to spot to honor de Pinedo.

Harris’ motion to rename Tivoli Place, came two days after the Italian Federation held an event at Tivoli Place to honor de Pinedo’s accomplishment which was greeted by thousands of Italian immigrants in New Orleans “Little Palermo.” In October 2021, the Italian Federation went to court asking the city to erect the Tivoli Place and Tivoli Circle signs.  The city council agreed with the names being Tivoli and asserted its right to rename them.  Harris misinformation Press Release, which omitted that part of the history and uses an the incorrect name of Lee Circle, received national attention.