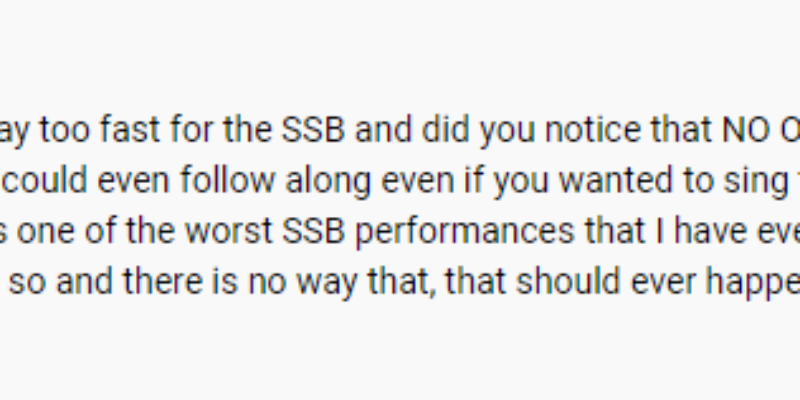 There’s a good deal of license given to musicians for performing the national anthem, and for good reason. Variety isn’t a bad thing, and different artists are going to sound differently trying to sing the song exactly the same way.

That said, last night’s NCAA men’s national basketball championship pushed the envelope on the national anthem a bit. The Preservation Hall Jazz Band and Torriana “Tank” Hall of the soul band Tank and the Bangas got together for a performance of the Star Spangled Banner, and the reactions have been mixed.

Decide for yourself what this does for you…

She’s got a terrific, smooth voice which really shows up in her regular songs, and aesthetically the anthem performance isn’t bad. In fact, there were people who really did like it.

This anthem is so New Orleans, man. Tank and Preservation Hall Jazz Band, I love it.

Whoever is doing the anthem at the men’s title game, you are allowed – and encouraged – to do it anytime.

But is it disrespectful?

I’m pretty agnostic about this, largely because having grown up in New Orleans and been exposed to brass-band jazz nonstop it doesn’t make much of an impression on me. This is what a national anthem performed as part of a second-line parade would sound like, and if you know New Orleans it’s, well, it’s what it is.

Is it bad to dance to the national anthem? I don’t know where that’s written.

Mostly I’m just grateful that the Final Four was in New Orleans and the local knuckleheads didn’t harvest the tourists in any great numbers. Maybe there’s a chance of reviving the tourist economy there after all.

As for the game itself, that’s got mixed reactions, too. Kansas fans will tell you it was the greatest thing ever. North Carolina fans are mostly kicking themselves for blowing a 16-point halftime lead. All I can think about is that Bill Self is every bit the cheater Will Wade was, and now Self has a lifetime contract and a national title and Wade was fired for cause and the entire LSU roster is in the transfer portal, with a rumor circulating that it was LSU’s call to dump them rather than the other way around.

Those kinds of things make ambivalence about all things college basketball pretty much standard around here. So maybe it’s appropriate to jazz up the anthem some.